Welcome to this SOLIDWORKS tutorial for a zombie bat, to begin this assembly, I start by creating a baseball bats profile for revolving. One tip for this part, I advise adding any fillets after you have revolved the part, this makes it easier to adjust the original sketch, but also allowed me to add asymmetric fillets. Once the bat is modelled, I added a wooden appearance to it, firstly for my rendering of the part, but also this makes the part easier to see when mating wire parts to it in the assembly later on. 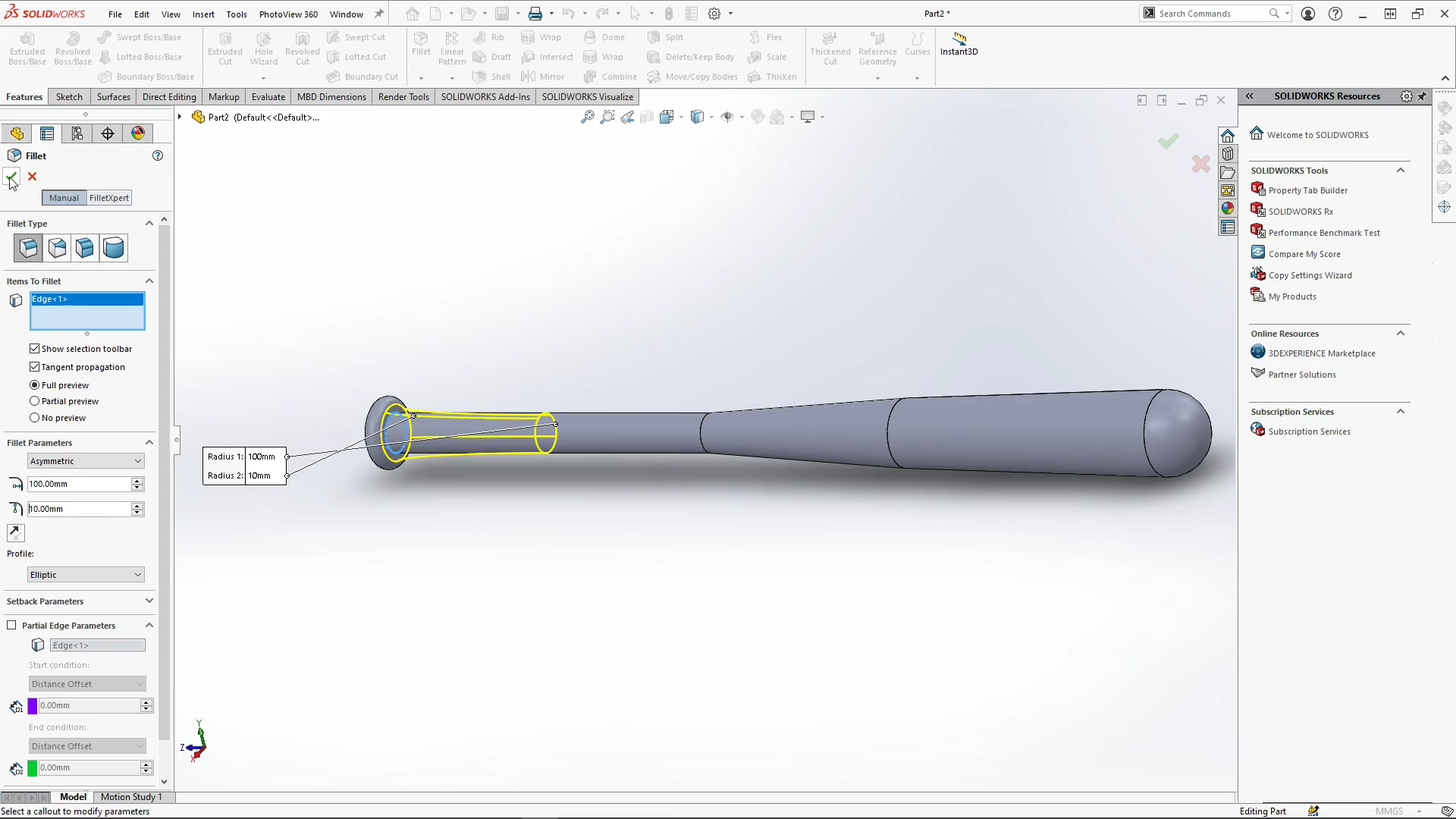 The next part to model is the loop of barbed wire. The main part was modelled using a sweep and twisting the profile along the path, the barbed wire parts were slightly more complex. For these I modelled a spiral using a helix and a circular sweep, without a taper, which wrapped around the wire loop. The ends of the sweep needed to be extended but before this I needed to change the angle of the faces. 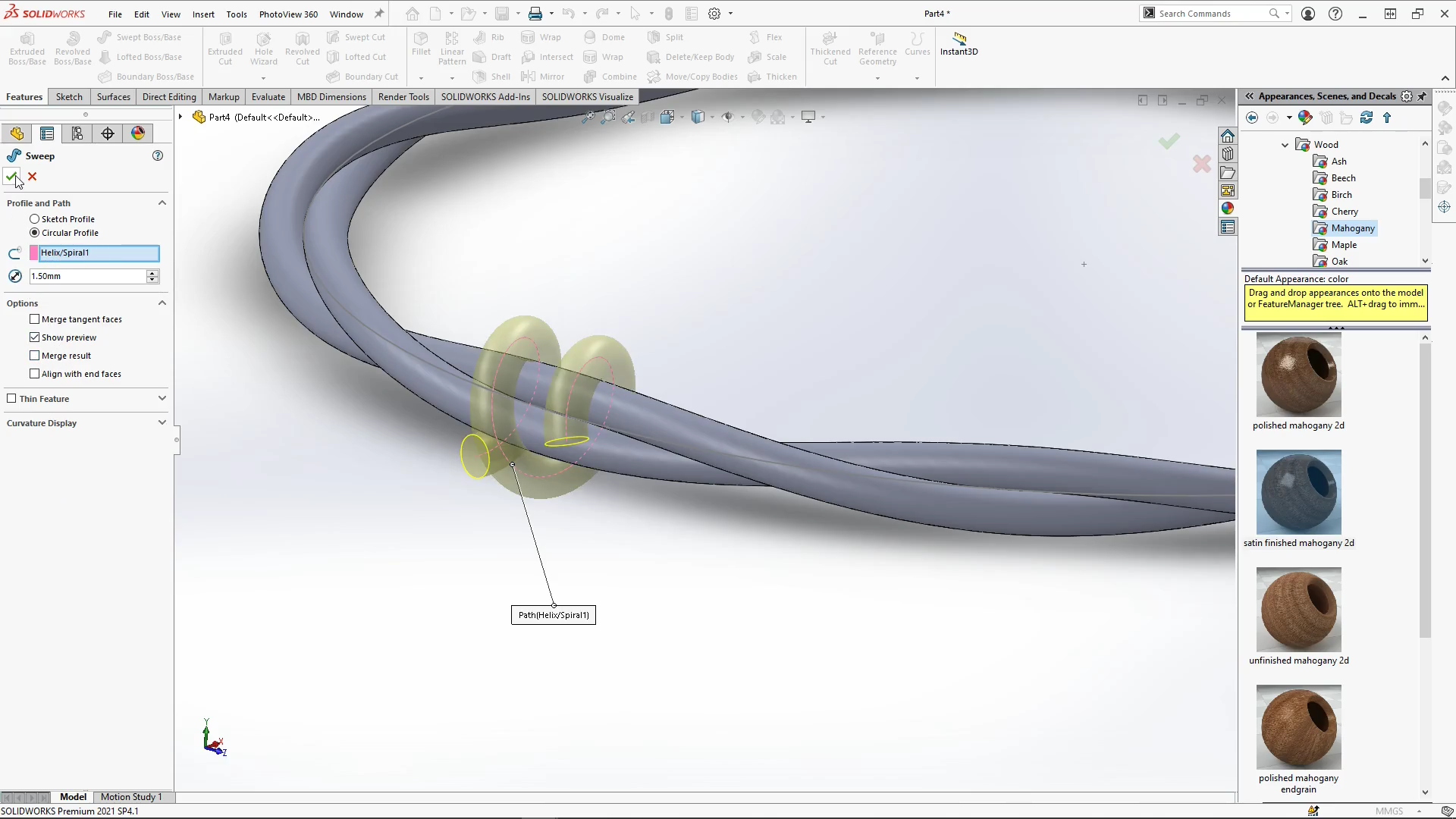 I used the direct editing tab and move face to do this, with rotate selected I could tilt the face to the desired angle. This was applied to both ends of the sweep, the faces were then extended with an extrusion and a dome was applied to each to cap the ends. If you have ever used the dome feature and found that the dome shape is pointed, try unticking the continuous dome box. 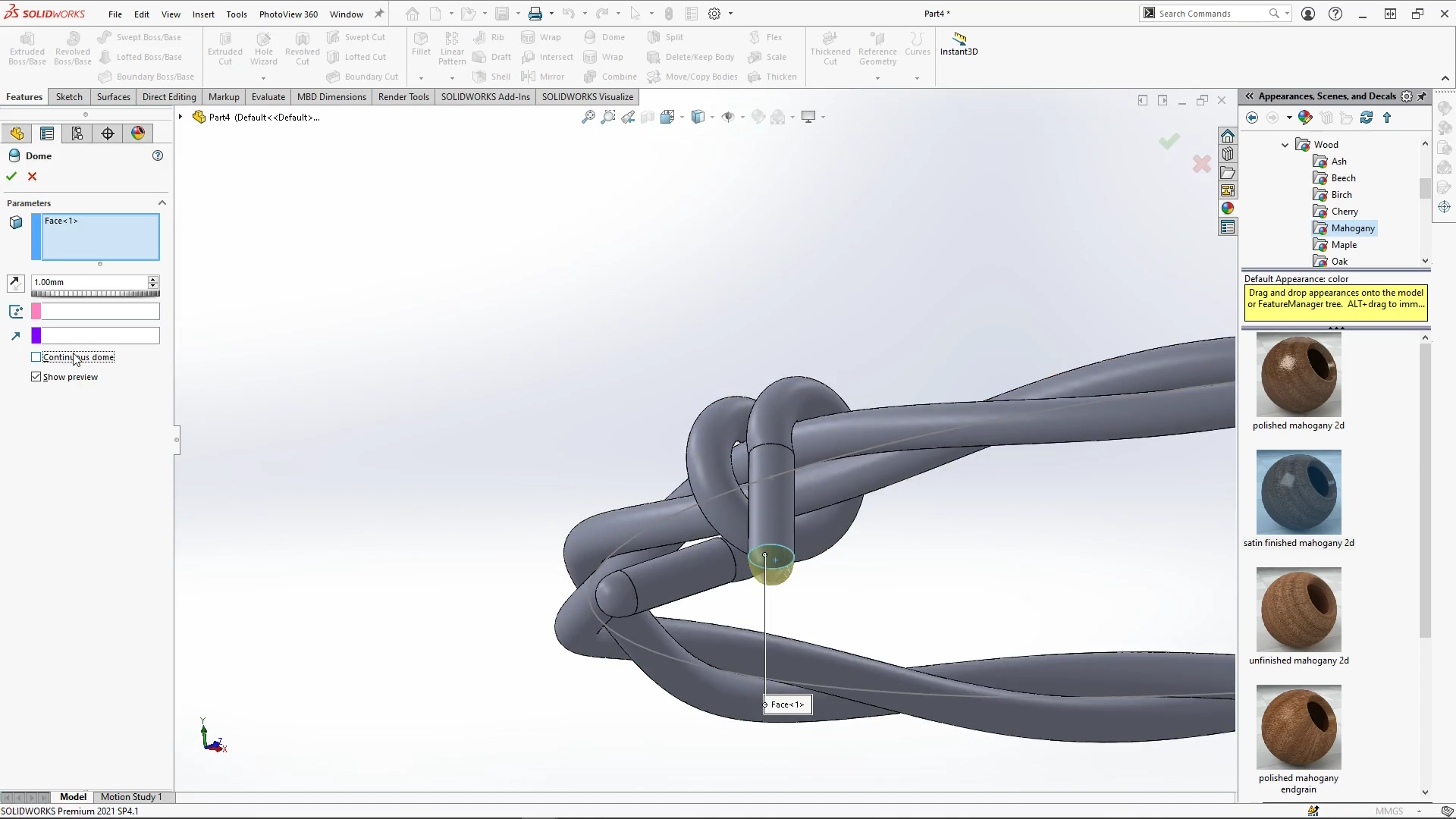 To create the recognizable barbed wire look, the wire needed to look more coiled and have more points coming away. To achieve this I used the mirror feature twice, I mirrored the barbed wire sweep along a new right plane center to the sweep axis, and then mirrored the mirrored body along the top plane. From here I could delete the first mirrored part to be left with an interlocking wire. The bodies were then circular patterned around the wire by 2 instances and a brushed metal appearance was added before saving the part and starting a new assembly. 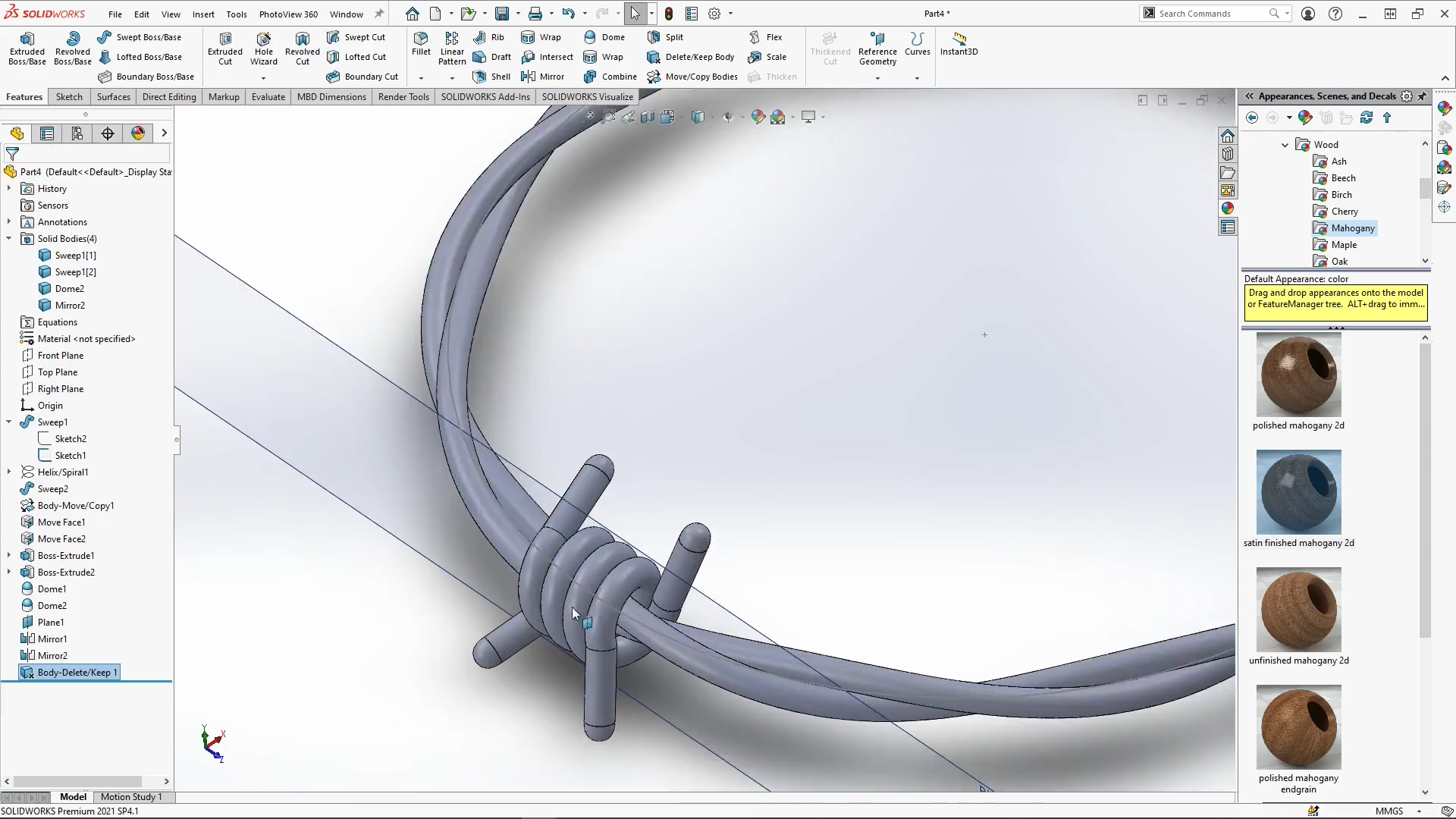 For the assembly, the bat part is a fixed component, then multiples of the wire part are dropped along the top end of the bat. They are mated into place using a coincident mate from the center of the wire to the centerline of the bat. The wires are spaced apart from the center point of each, this doesn’t fully define the wires, but it does give you an element of control for rotating them into place. For this part of the tutorial the placement of the wire doesn’t have to be perfect, the wire would embed itself or push against the bat in real life, so it’s just a case of playing around with the positioning of each wire until the cross over into each other. I wanted it to look like the wire loops were connected to each other and have been wrapped around the bat all the way down. One thing to note is you should try to alternate the barbed wire spikes so they aren’t too close together otherwise it wouldn’t look natural. 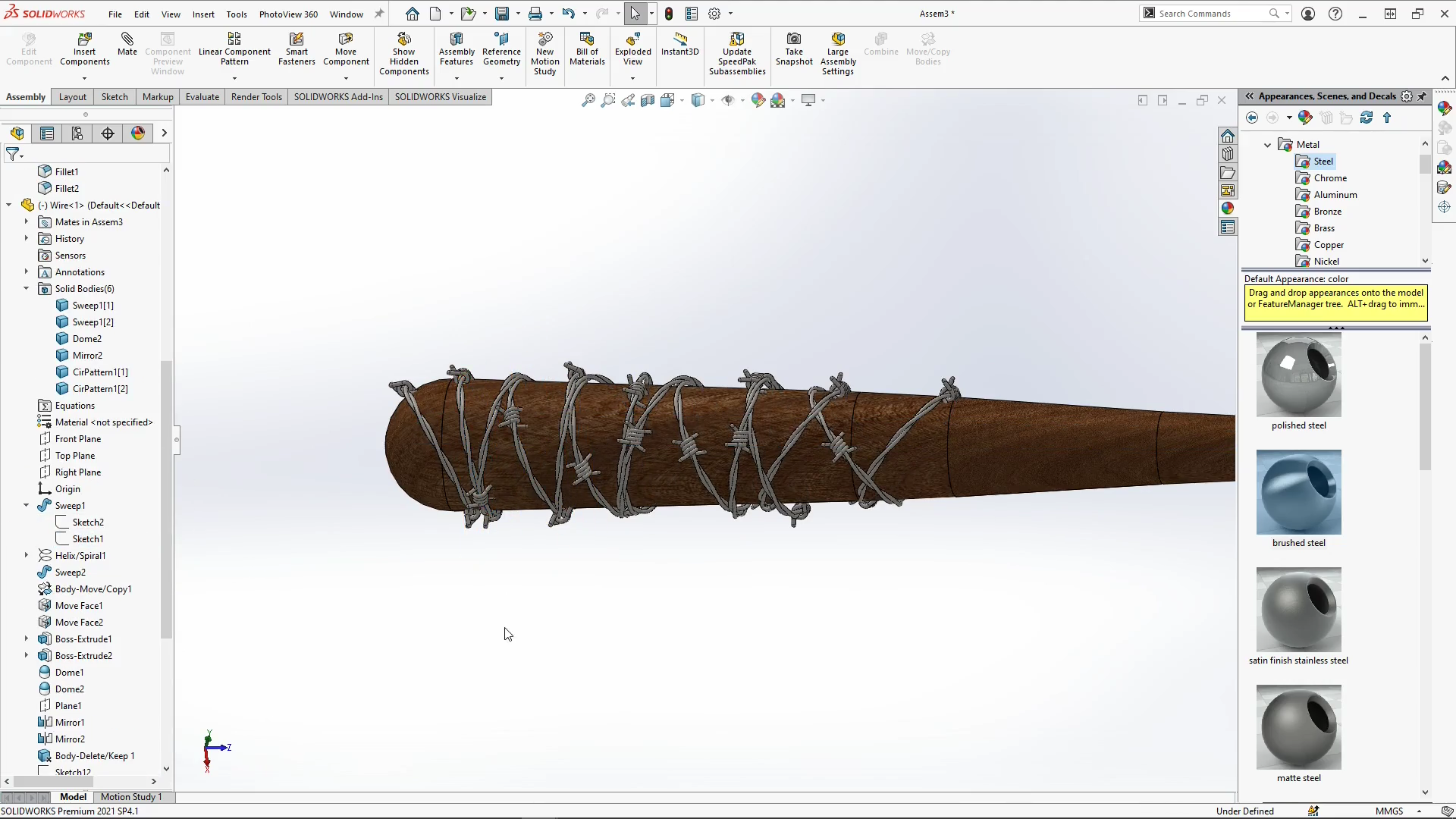 My final modelled bat was rendered using SOLIDWORKS Visualize, I added some blood to the part for the final image, once in Visualize, I played around with the appearances, textures, camera focus, lighting and environment to get the below rendering. 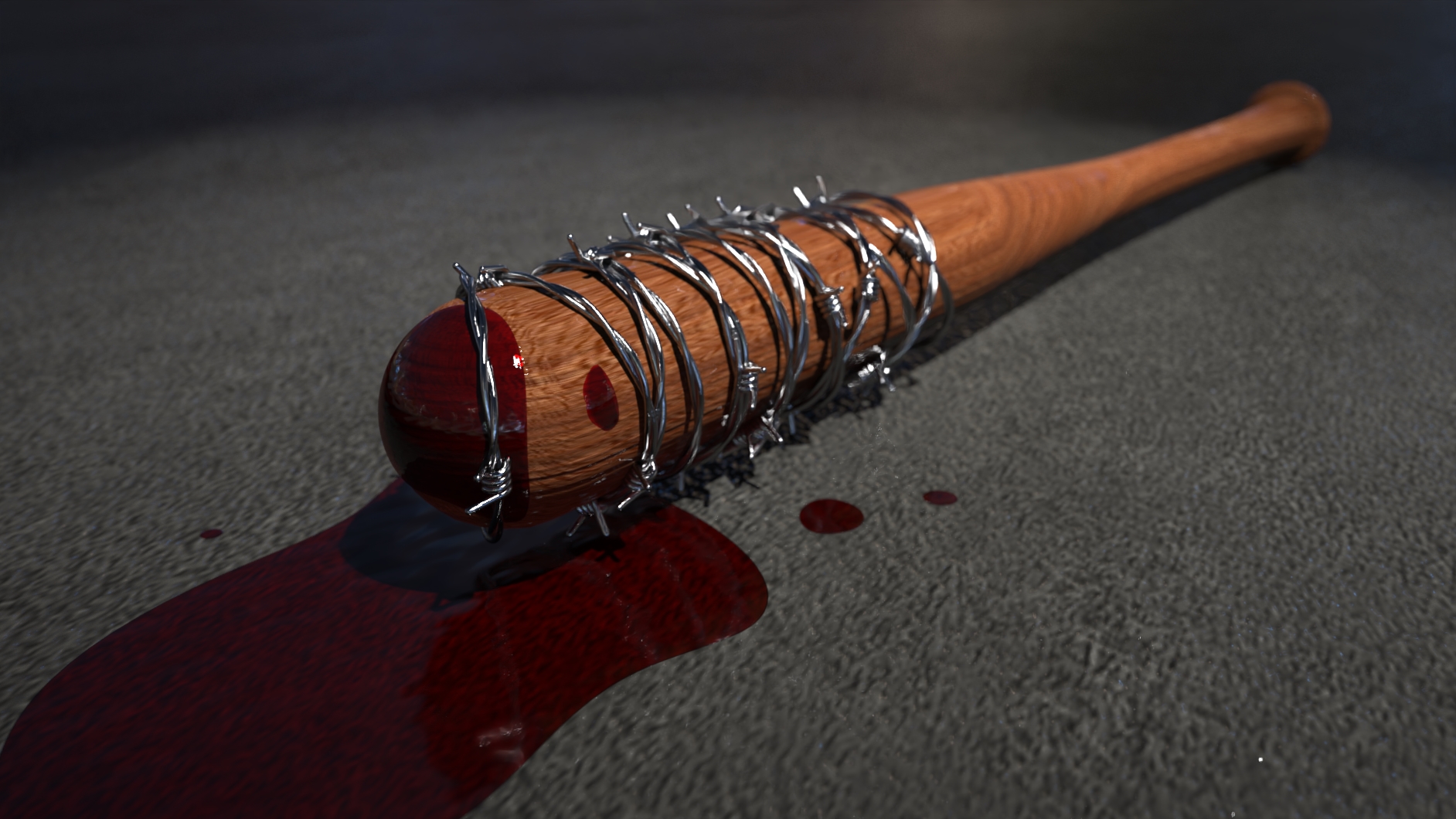