In this post about the W16 engine I will present the build of the intake manifold through top-down design. 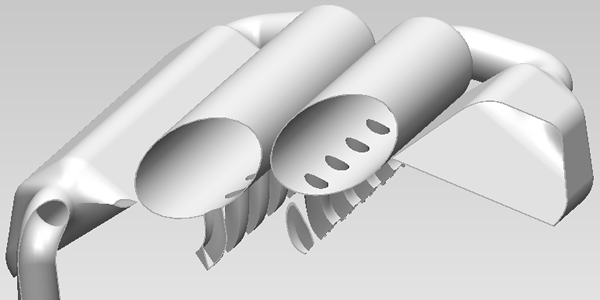 Thank you for reading about this build and stay tuned for the next post which will detail the build of the exhaust manifolds, turbo compressors and their integration with the intake manifold. 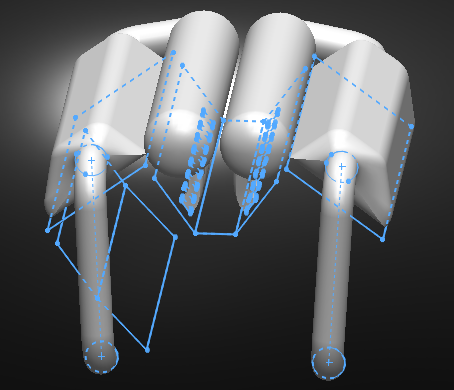 I decided to build the intake manifold through top-down design strategy because all the large parts of the engine – block and cylinder heads – were ready and not prone to be modified later.

Because in the real engine the exhaust manifolds and intake manifolds are connected by the turbos (4 in the real one , 2 in my model – built only to show how the basic concept works), I decided to build these three important parts in parallel: I built the top part of the intake manifold, the exhaust manifold, the turbo and then by using top-down design again I connected the intake to the turbos.

I started with opening the whole engine assembly and creating a new part. In that part I converted entities from the surfaces that I needed for fitting and sizing the intake close onto the engine. You can see the surfaces (sketches) I copied in the above image (in blue). I made sure to copy the exhaust holes from the cylinder heads.

I decided to create all the intake manifold as solid parts and hollow them with a shell after the final shaped is built, as it is more difficult to sequentially create and connect hollow sections.

The first elements created are the two tubes that distribute air directly to the cylinders. I started with a sketch on the plane parallel to the front one and extruded backwards. The front ends are capped with domes. 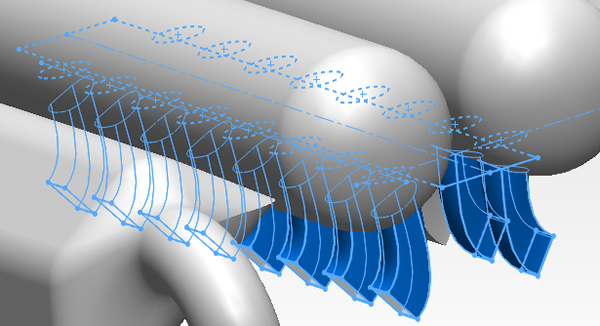 To connect the distribution tubes to the cylinder heads I used lofts. For the ease of construction I connected each square section of the cylinder head’s holes to a circular profile. The real engine has only circular tubing / piping, but I built this part only to prove the concept of exhaust -> turbo -> intake, while keeping a relative similar look. By knowing the spacing between the rectangular holes in the cylinder head sides, I created a plane that goes through the two targeted tubes and sketched two linear patterns of equally spaced circles.

To connect the two large distribution tubes with the elements that sit on top of the cylinder heads (for filtering the air perhaps? If you know, please comment and let me know) I used swept cuts and two additional planes. I “guestimated” the angle of the near-horizontal plane that holds the path by looking at the pictured/diagrams of the engine.

For the elements on top of the cylinder heads, I started with a large boss extrude from the plane in the above picture (Plane7). Because I also needed to link this element with the previously built “C” pipe I used an offset condition, to leave some room for a loft. After also adding a loft, I moved on to the front side and by looking at the sketches copied from the surfaces of the block, I created another plane that would hold the circle at the end of this element. Just as on the back side, the front side has a loft connecting the large oddly-shaped boss extrude with a circular pipe. I then readjusted the length of the main boss extrude to leave some room for the connecting loft.

At this point of the build I had to save everything and start work on the exhausts and the turbo compressors and leave the near-vertical connecting pipes in the front for later, as I did not know where exactly the pipes from the turbos will be located on the front plane.