I recently was working on a somewhat complex model from a customer in Simulation, and I used the Power Select tool in SOLIDWORKS to help make the job easier. Here’s a cut view of an example model so that you can see all the small faces where I needed to apply a pressure loading, and hopefully you can imagine the task of having to make sure all of them were properly selected in the Simulation load dialog box. This is where I remembered the ability of the Power Select tool to get features based on color. 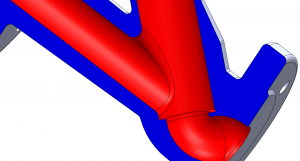 So I systematically made several different selections of faces (of course also using the face filter tool) and colored them a nice Red color indicating where the pressure was to be applied. This made the task of making sure all of the required faces were grabbed since I could clearly see whether they were red or white; this was the the case for very small faces that were areas of a fillet feature.

After I was assured that I had all the faces I needed, then I invoked the Power Select tool from the drop down menu of the selection Arrow.

Then in the Power Select dialog, I chose to select only Faces, and filter them only by Face Color. Hitting the “Search” button then instantly found the 127 faces! 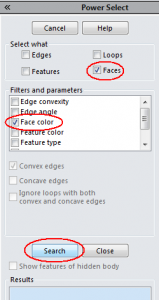 Upon hitting the Close button, I had all the faces pre-selected for me to apply the Pressure loading in Simulation with the confidence that I knew that I had everything.

I’m also loving the Selection Sets functionality in SOLIDWORKS 2015 in all the Simulation products. It is better to do things smarter than harder… what is called a smartcut!