Recently inspired by the four-man bobsleigh event at the 2014 games in Sochi, in which Team USA’s sleigh Night Train 2 was designed in SOLIDWORKS, I set out to find out more about the aerodynamics of these vehicles that barrel down the track at speeds of around 100 km/h using Computational Fluid Dynamics (CFD) tools.  The “virtual track” that I chose to use as my tool is SOLIDWORKS Flow Simulation.

First before getting into the actual bobsleigh, I decided to take a look at some typical aerodynamic shapes to get a feel for the capability of the software to handle such a simulation.  I found a very nice chart that shows the coefficient of drag, Cd, across a wide range of Reynold’s numbers for a sphere and a circular disk (see below). 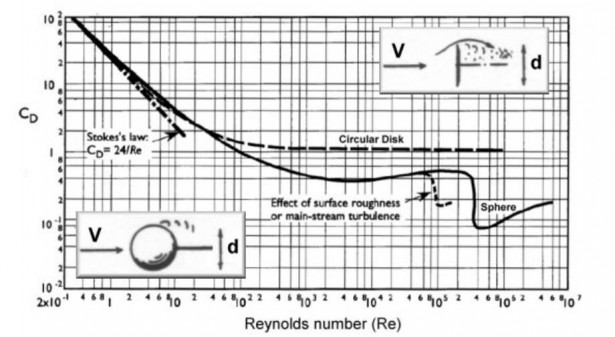 After I modeled these geometries up quickly in SOLIDWORKS, each with a diameter of 1 meter, they were run in SOLIDWORKS Flow Simulation with the following settings:

I was very pleased to find that after running 6 variations of Reynold’s number for the sphere and 3 for the cylindrical disk that the calculated Cd closely matched the published curves that I found (see below) for both geometries.

For some cases, the flow became unsteady and vortices were being shed into a vortex street; I still ran these as steady flow runs.  The only downsides to this approach are that the calculation will never converge to an equilibrium result and I cannot determine the bandwidth of the oscillations, but I was not really interested in the latter.  Because it would not converge and thus finish to a final solution, I had to keep an eye on the calculation’s progress.  After a few oscillations developed in the results, I manually stopped it and then evaluated the numbers in Excel to determine the average Cd for the case (see image below). 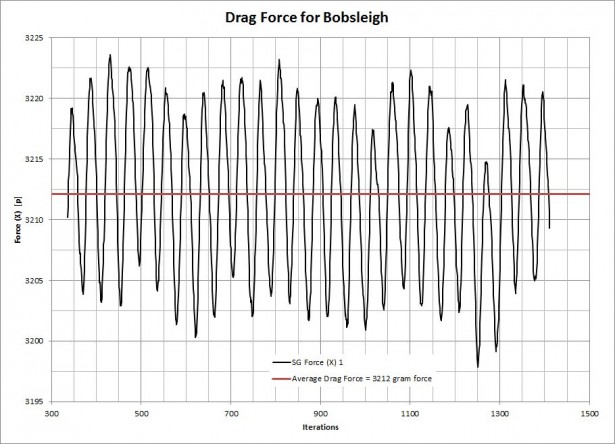 But now armed with the knowledge from running these test geometries, I felt more confident getting into the bobsleigh model.  I followed pretty much the same techniques as before, with the exception now of using air as the fluid.  Also I made the computational domain for the calculation quite large, especially in the rear of the vehicle, so I decided to make the adaptive mesh refinement only in a local region around the bobsleigh model that I defined by a disabled solid volume that enveloped the sleigh.  The disabled volume takes on whatever characteristic is behind it, so if it could be on top of both solid and fluid geometries at the same time.  The resulting mesh count after the calculations finished was about 1.6 million computational cells (see below).

Because the frontal area, used in the Cd calculation, is much more difficult to determine than for the sphere or disk models, I used the power of SOLIDWORKS 3D CAD to find this out.  Since the model is an assembly file, I first saved it out as a single part; and the reason for doing this was so that I could export the model as a DXF file in the correct frontal orientation.  SOLIDWORKS then allows me to open the DXF file that I created into a sketch in a new part.  Now all I had to do was clean up the lines inside the exterior boundaries and then I could extrude the sketch to measure the area of the front face (see image below). 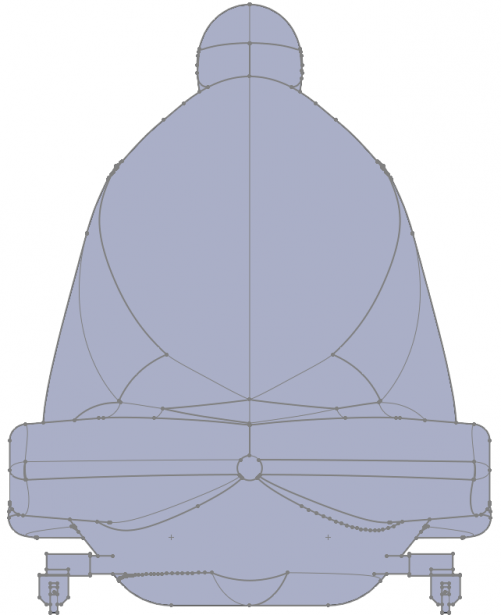 The flow results over the bobsleigh are quite interesting.  There are many things that I expected, such as high pressure on the front wing and on the front visor of the driver, but one thing I didn’t expect was that the recirculation behind the last sited athlete is quite compact.  The air recirculating in a small region there creates a type of virtual body and helps the sleigh to slip through the air better (see image below). 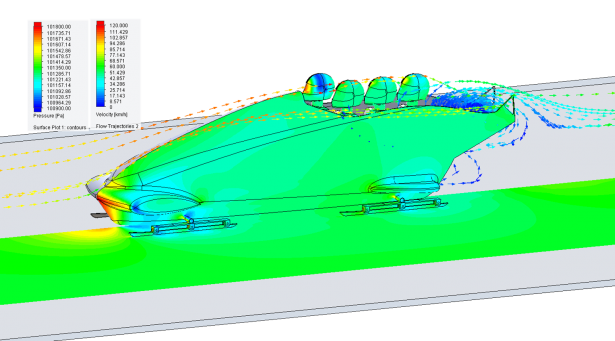 And it is my thought that this is helped by the front wing that divides the air above and below the sleigh which eventually meets up again in the rear of the body.

If you want to know what the drag coefficient of a bobsleigh is, it is about 0.23, or at least that’s what I found.  But it seems to be about right, because the Cd of streamlined automobiles tends to be in a range between 0.24 to 0.3 (and the Cd of a pickup truck is about 0.8 to 1.0).  Because the frontal area is such a key to the actual drag force that a vehicle sees, I also calculated the CdA to be about 0.13 m^2.

And since I checked my setup with those simpler geometries, I have a positive feeling that the number is good, and I had a great time in pursuing my interest in the aerodynamics in sports!

To learn more about the Night Train 2 and how the Bo-Dyn team used SOLIDWORKS to design a medal-winning sled, check out our website, and be sure to download our infographic.

What goes into building a bobsled? from SOLIDWORKS