In this year’s 4-man bobsled this year in Sochi, it is expected that only a few hundredths of a second will separate the gold medal winners from the silver. Because of this, every team is trying to get even the slightest technical advantage in the design of their bobsleds.

As in most competitions, there are rules for both the competition and the design of the equipment. The IBSF (International Bobsleigh and Skeleton Federation) provides a rule book, as well as engineering drawings placing limits on shape, weight and materials for the bobsled.  Of course, the trick is finding the optimal balance of the factors which will help any given team win.

For the Bo-Dyn Bobsled Project Inc. team, who designed and built the 2010 gold medal-winning US 4-man bobsled called the Night Train, it meant having to go back to the design table. Their goal was to build an even better (and slightly different) bobsled for the 2014 Sochi games: the Night Train 2.

One of the biggest challenges was that the bobsled run in Sochi is much different than the one in Vancouver.  It’s a bit slower, and actually includes some uphill sections. The other big challenge was time and money – the original Night Train was designed primarily using 2D design tools, and needed many changes after it was manufactured – costing time and money.  It meant they had less time to optimize their design.

The Design and Manufacturing Team

Bo-Dyn Bobsled Project Inc. was created by NASCAR® great Geoff Bodine, (winner of the 1986 Daytona 500) and Bob Cuneo, owner of Chassis Dynamics Inc. (experts in race car chassis development). They had one goal in mind – to develop the best equipment to help US bobsledders compete and win.

Other team members include Hans Debot of Debotech, an expert in design and manufacturing of carbon fiber and composites, and Jim Garde of Cheech’s Creative Concepts, an expert in race car chassis design and metal fabrication.

A decision was made to go with the basic shape of the original Night Train – it had been aerodynamically tuned over the last four years, and the design team felt this was as close to optimized as possible.  The main focus of the redesign would be on weight distribution and handling – in other words, chassis and steering.

The strategy was set. First, the body shell would be made of carbon fiber to improve weight to strength ratios.  Second, steering would be modified significantly to allow for better steering feel and control, which would be needed in Sochi.  And third, weight would be strategically positioned where it had the best impact on performance of the bobsled.

To be continued tomorrow in part 2… 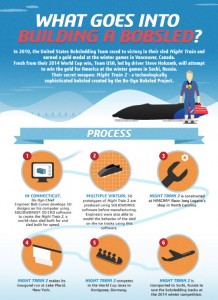 Learn more about what goes into building Team USA’s bobsled on our website, where you can see the Bo-Dyn team present on stage at SolidWorks World 2014, as well as download our new infographic on bobsled design.

Craig Therrien is a Product Manager at SolidWorks