Last week, we wrapped up the simulation webinar series. The webinar topic was on Topology Optimization displaying the technology available on SOLIDWORKS Simulation Desktop as well as showing a collaborative workflow with the cloud-based solutions for subdivision modeling (Sub-D) as well as for design guidance! All in the context of exploring the Additive Manufacturing Space!

Here is a quick recap of the webinar:

We started the discussion around some SOLIDWORKS Evaluation tools such as Interference Detection, Clearance Detection and Print 3D that help fine tune designs before Additively Manufacturing them. Below is a sample screenshot of the Print 3D feature. 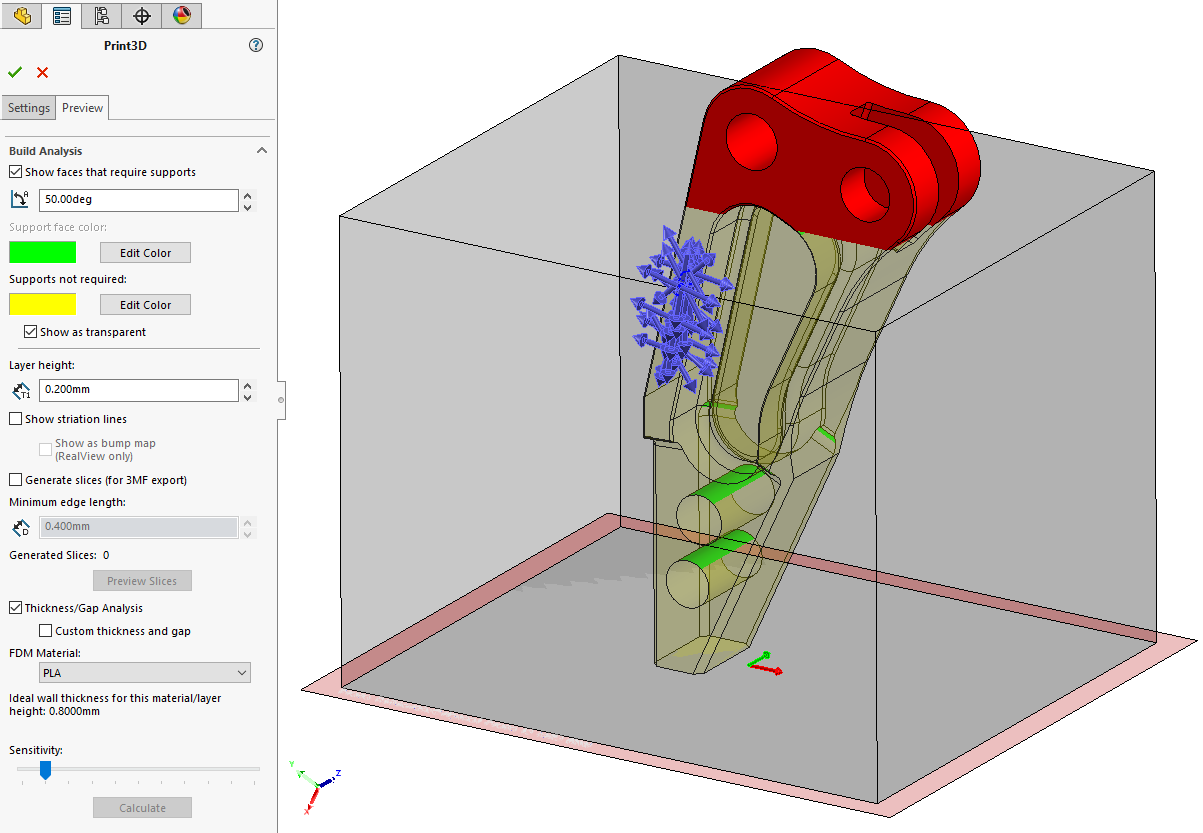 Next traditional optimization tools such as Shape Optimization techniques were discussed. In this process, a pre-defined shape in the product like a cut out is automatically driven to an optimal shape, light weighting the design. A Holmatro Arm example was used to illustrate this as shown below. Several design dimensions in the pocket highlighted were driven to make the pocket a little wider and deeper and thinner as well! 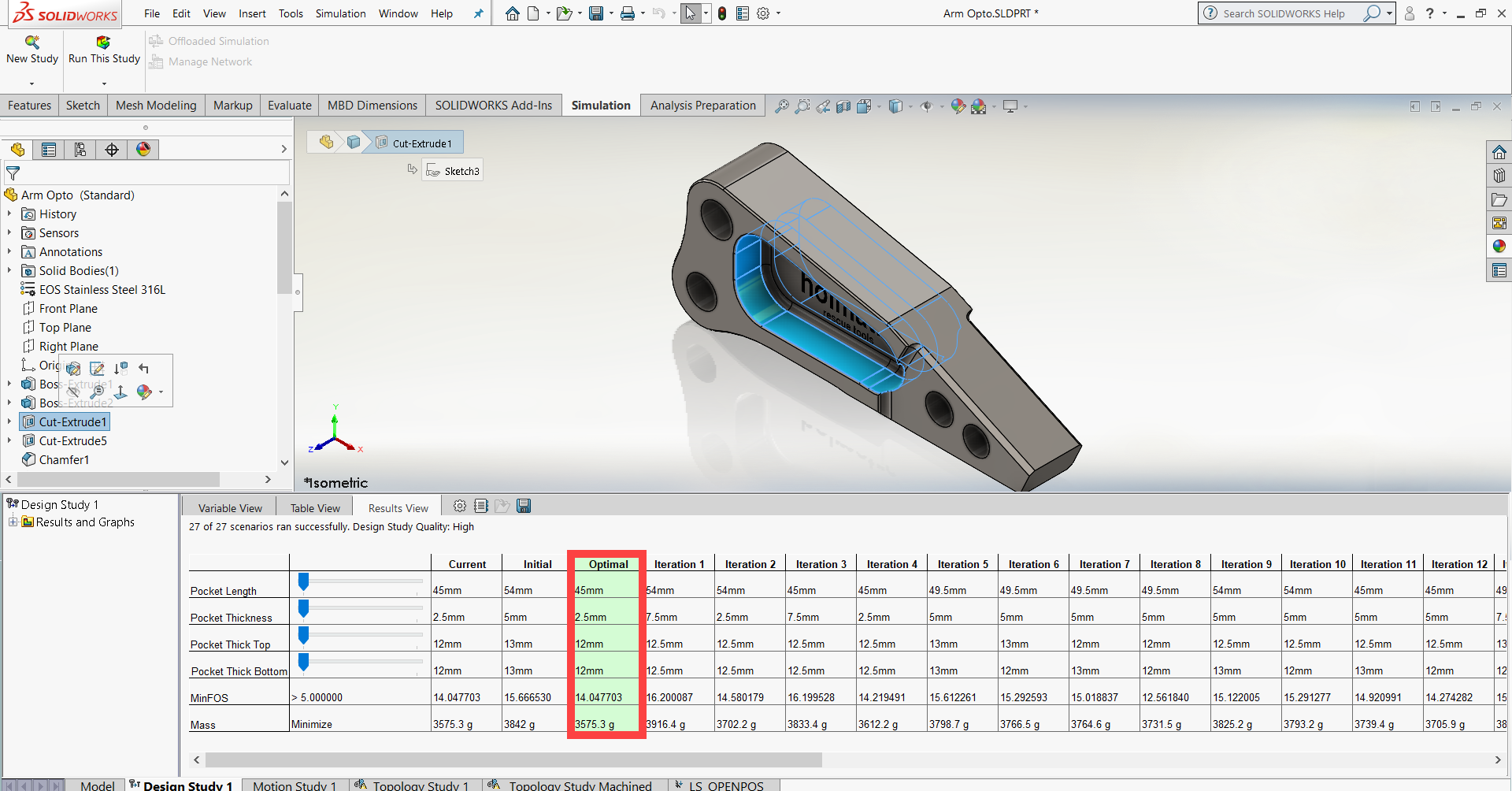 1. What if you do not have a pre-defined shape?

2. What if you want to further lightweight the arm?

With Topology Optimization, a block shape is used as a baseline volume of material to work with. You can not only define the physics like loads and boundary conditions but also have goals and restraints (such as best stiffness to weight ratio) plus enforce manufacturing constraints. The result is a shape as shown below on the right side!

This shape can then be further pushed out to the cloud in a collaborative way so the appropriate tools can be used to make the shape smoother. The screenshot below shows the SOLIDWORKS Connector that connects the SOLIDWORKS Desktop to the 3DEXPERIENCE Cloud Platform. Once the SOLIDWORKS file is available on the cloud, any user, anywhere can access it on any device! 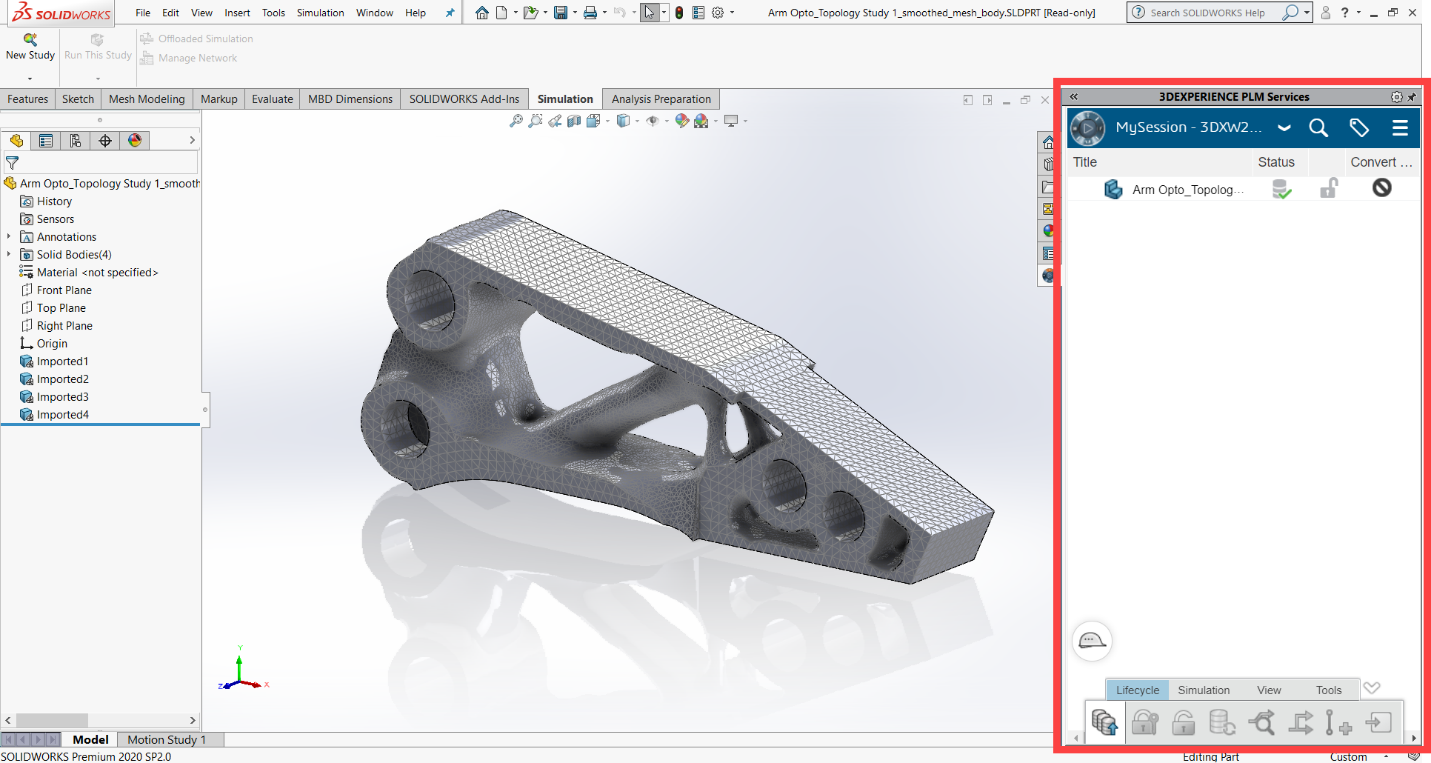 In the webinar, we showed a couple of things. One is, a user loading the file from the Cloud on SOLIDWORKS Desktop to show Mesh Modeling tools such as how to create an axis from mesh, how to create a surface from a mesh etc. The second scenario was to open the SOLIDWORKS file in the browser based App called xShape that uses advanced Sub-D modeling techniques to quickly create a more usable, smoother and organic shape as shown below. 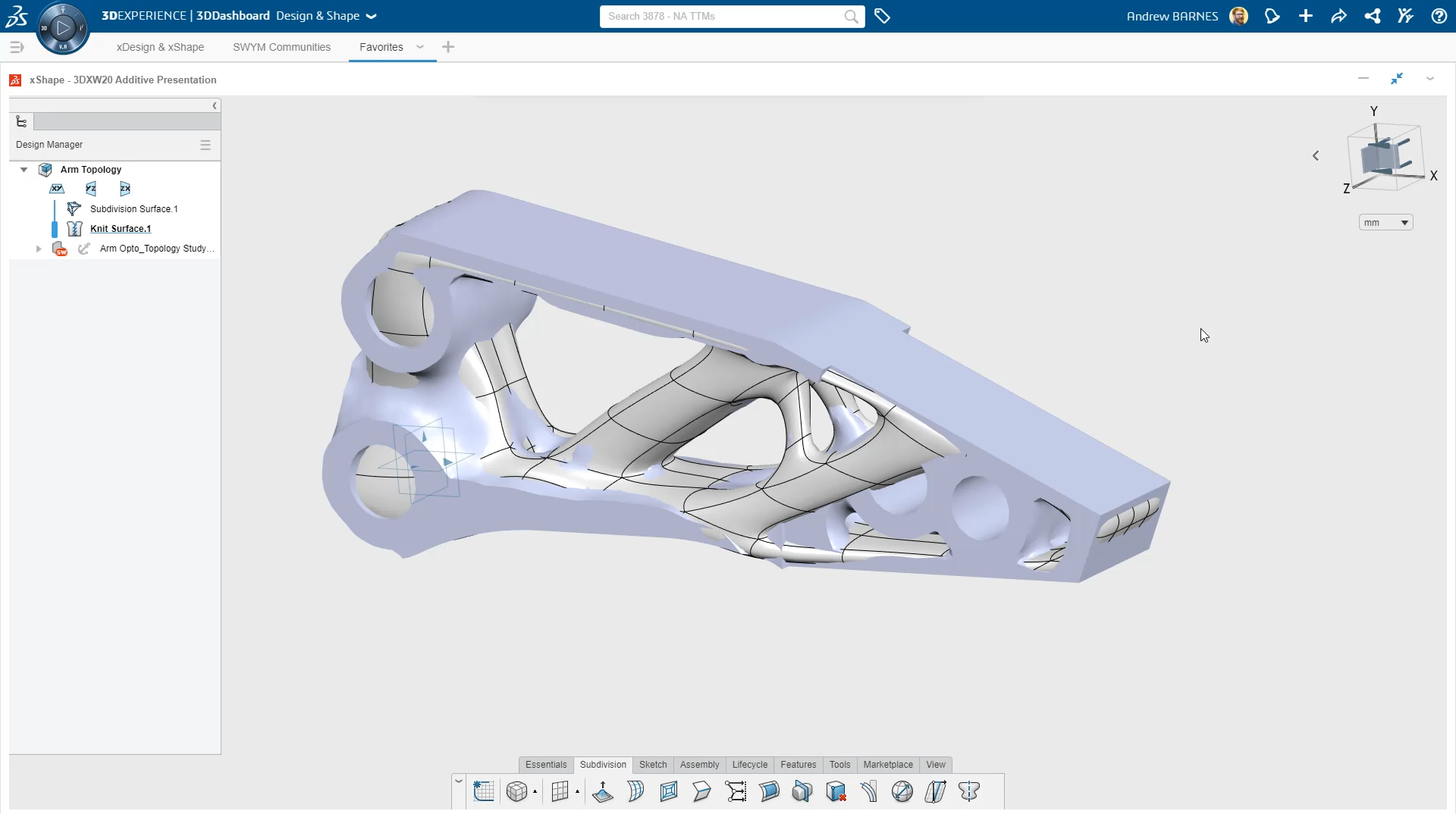 This shape can be saved and pushed back into SOLIDWORKS seamlessly to create additional parametric features as well. See screenshot below. 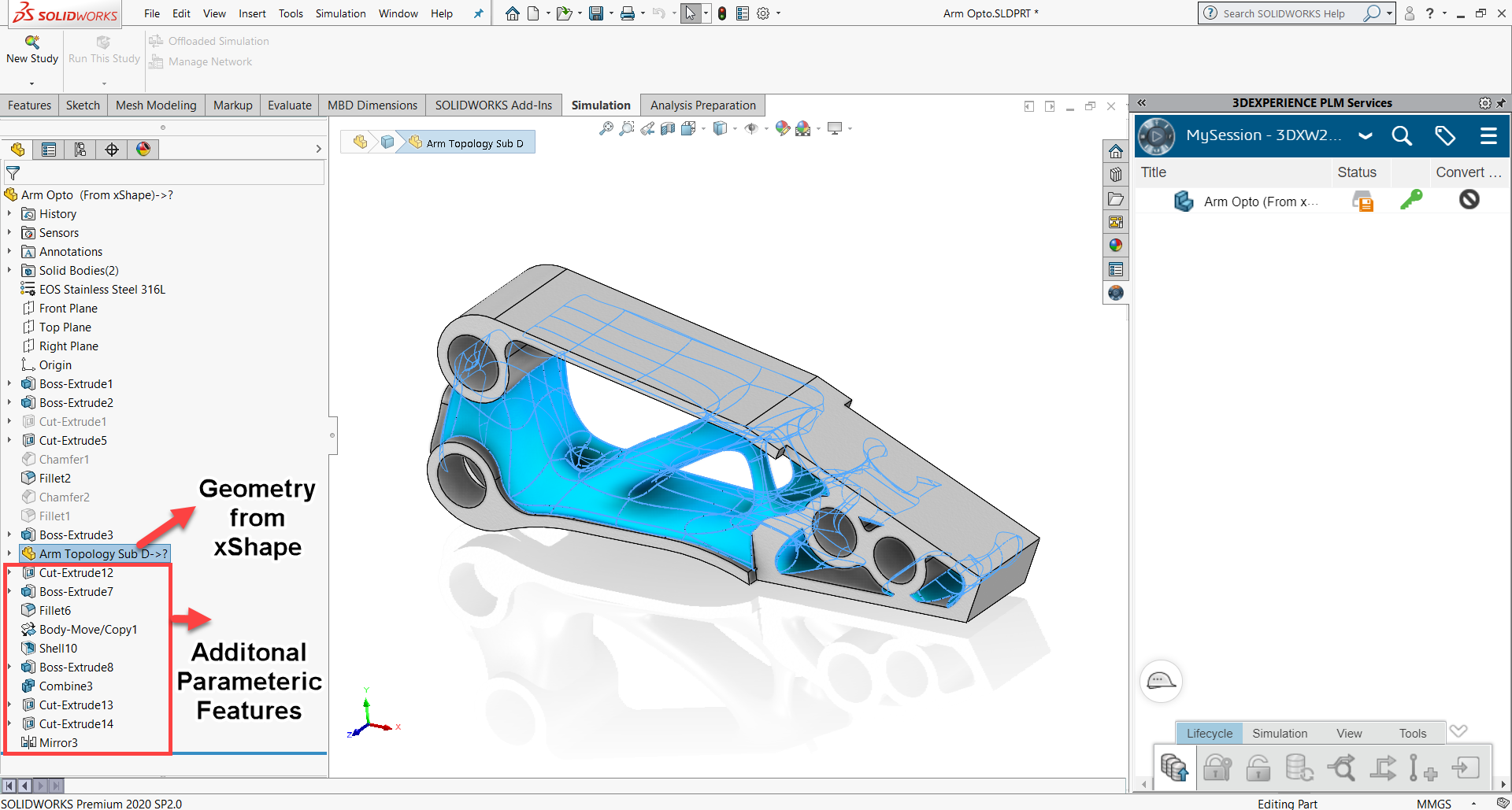 We covered the final part by highlighting xDesign, which is another powerful tool on the 3DEXPERIENCE platform. While it offers parametric CAD on any device, the primary focus of the webinar was to showcase the built in design guidance tool which is advanced topology optimization on the cloud.  The screenshot below shows an example of the mounting bracket that was fully setup and solved on the cloud using xDesign! 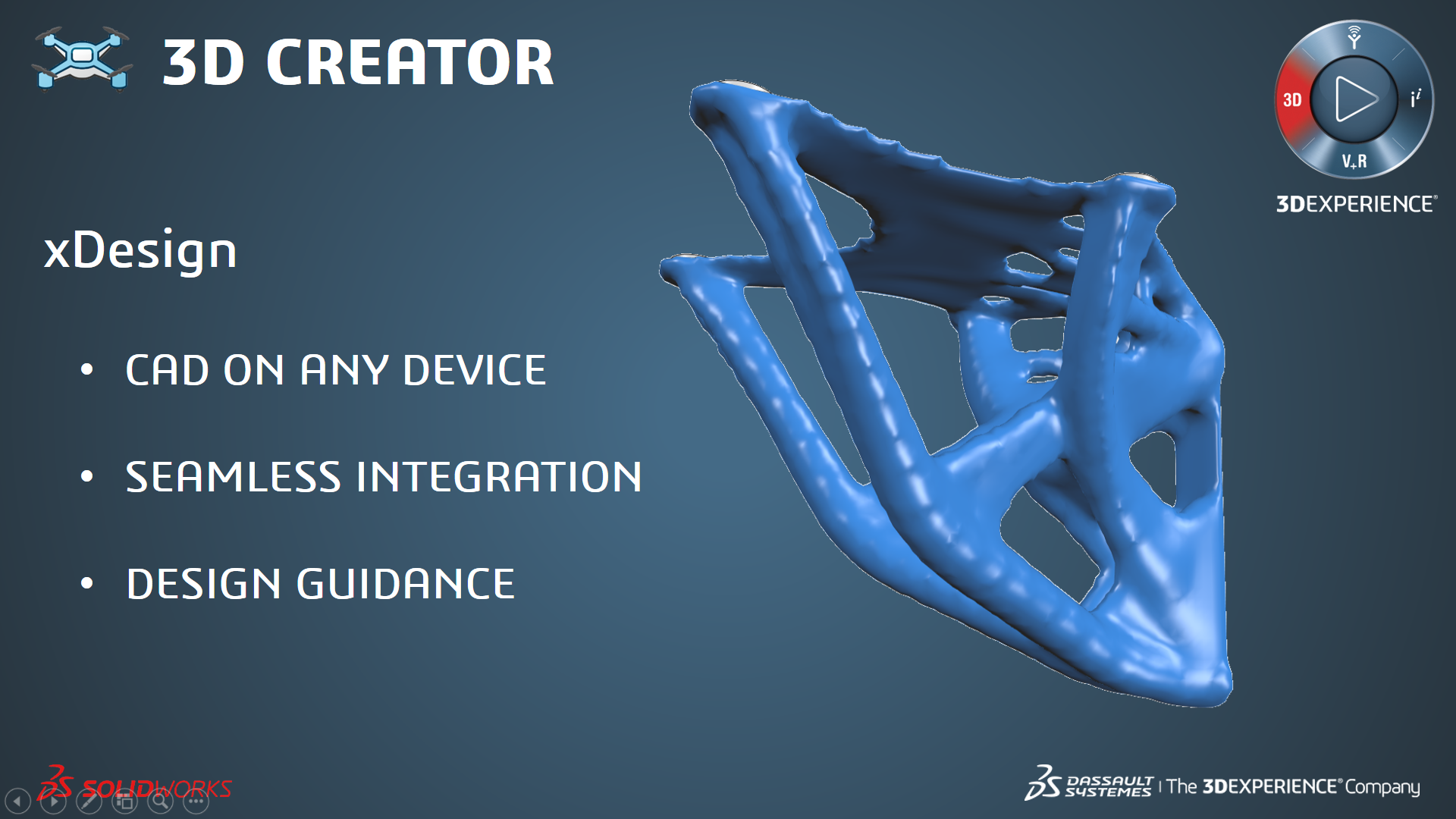 You can watch this webinar for full details as well as watch the entire simulation series here.