Dozens of high school students in matching powder blue polo shirts excitedly set up their projects one week ago on Friday, June 17th, 2016, at the tenth annual Lemelson-MIT EurekaFest. The EurekaFest is` a two-day event celebrating youths who are interested in STEM (science, technology, engineering, math). The main exhibit of the EeurekaFest is the InvenTeams Showcase, which features the finalists of the InvenTeams competition.

For those of you who don’t know, the InvenTeams competition is meant to encourage students from grades 7-12 with an interest in STEM to come together and invent unique solutions to real world problems in their communities. The competition is nation-wide, with 15 InvenTeams participating in the final round.

So who are these brilliant students, and where did they come from? The first Inventeam came from The Archer School for Girls in Los Angeles, California. This all-girl team designed a kitchen faucet attachment which measures how much water you use and provides you with information about how you can adjust your water consumption. The device includes adapters allowing the product to fit most faucets. Team members Alex Feldman and Anabel Robertson even went so far as to become Certified Sustainable Design Associates (CSDA)! 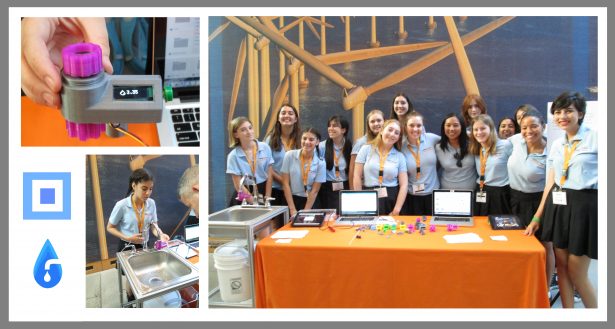 The second InvenTeam came from Berlin High School in Cherry Plain, New York. This team created a lever launch and retrieve system for physical therapy patients bound to wheelchairs. The idea is that the user will be able to gain more independence by being able to throw with a mechanical arm. The robotic arm has five degrees of freedom, so the device has a large range of motion.

Third in the InvenTeams Showcase was the Crossroads School for Arts & Sciences team from Santa Monica, California. They created a device for the monitoring of real-time home water use through a mobile application. The monitoring device itself is a camera linked to a micro-controller that sends image files to the app where the data is processed and presented in an easy-to-read graphical format. The app also provides badge awards to reward reductions in water use.

Next in the InvenTeams Showcase is the Gulfport High School team from Gulfport, Mississippi.These students produced a wheelchair lift to assist disabled veterans board boats. The lift is self-explanatory and highly effective; the prototype at the InvenTeams Showcase could hold 500 lbs. The team stated that their goal for the final product is to be able to lift 1500 lbs. The lift can also be used to move heavy cargo. We were also lucky enough to acquire a video of the lift in motion, which I have provided in a downloadable format here.

Team five came from KIPP Sunnyside High School in Houston, Texas. This group invented a semi-autonomous robot and novel material system in order to repair the many potholes in their hometown. The robot is able to patch holes in the road with an asphalt compound which lasts longer than conventional patches. The process itself is considerably less disruptive than traditional roadwork involving large work crews. 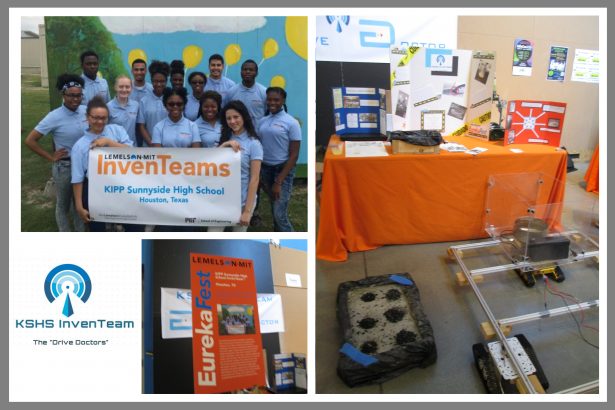 The InvenTeam from Landmark School in Beverly, Massachusetts devised a planting system for eelgrass. The team noticed that the amount of eelgrass on the ocean floor has been receding, which is a great environmental problem. Eelgrass has a hand in “carbon sequestration,” which is the process of removing carbon dioxide from the air and storing it in a solid or liquid form. The team developed a set of biodegradable disks with eelgrass seedlings which will protect the plants as they take root as well as a system for which the disks are to be planted off the coast of Cape Ann. 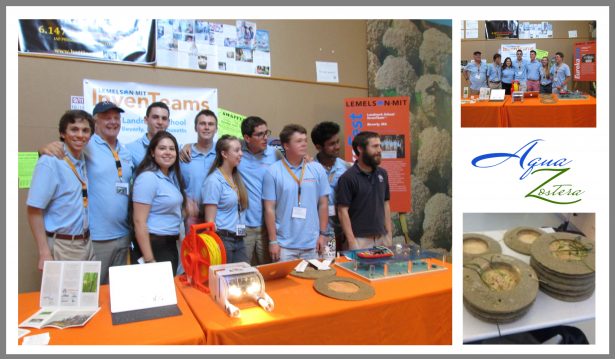 The seventh Inventeam came from McMinnville High School in McMinnville, Oregon. They developed a raised platform for use as a temporary emergency shelter. Oriented toward natural disasters, the platform can be folded and carried by first responders with ease. The platform is large enough to support a medium-sized tent and can be created with any type of local material.

InvenTem number eight from Norwood High School in Norwood, Massachusetts created an autonomous snow-clearing awning to help with snow removal during Massachusetts winters. The awning was invented with their school in mind, which had 10-foot snow drifts on top of the roof last winter. In practice, the snow would accumulate on top of the awning and the device would be able to sense it. The device would then raise the awning at an angle so that the snow would slide off the roof and onto the ground. The final product is intended to be 30 times the size of the prototype, so that it can cover the whole roof.

Next up came the InvenTeam from Riverpoint Academy in Spokane, Washington. This team designed a clean, power-generating stove to reduce indoor air pollution. The stove has a thermoelectric generator, which allows homes in rural Uganda to have access to electricity. Their prototype is capable of fully charging two basic cell phones each day.

The tenth InvenTeam came from Stockbridge High School in Stockbridge, Michigan. These students invented a water quality monitoring system to investigate the habitat of invasive lamprey in the St. Clair River. The device is able to be placed up to 100 meters underwater where it can record for 36 hours in both infrared and visible light. The data collected by the device can help scientists combat the lamprey to save the native fish species from being eaten by the lamprey, which will help the fishermen in the area as well. Madison Howard, the team’s sustainability lead, earned her CSDA as well. 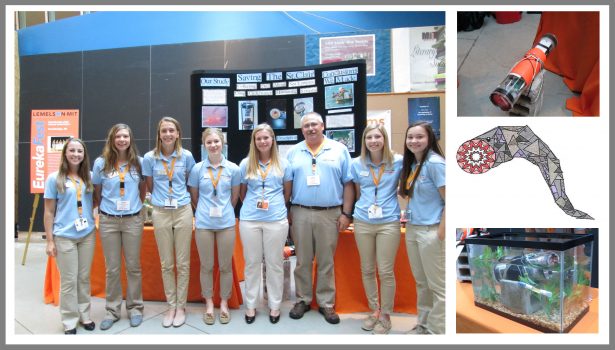 Despite being number eleven on the list, the Sturgis Charter Public School team from Hyannis, Massachusetts was the first team we met. They designed a marine mammal transporter which can quickly weigh and carry stranded dolphins and small whales. Their design is based off of a similar carrier the team created for the 2013 EurekaFest, but with many improvements. The Sturgis Carrier, as the product is called, is currently ready for field testing. The team already has a partnership with both the International Fund for Animal Welfare (IFAW) and the Woods Hole Oceanographic Institution (WHOI). The refinements to the Sturgis Carrier were made with the help of SOLIDWORKS, which the team taught themselves how to use and were very excited to share with my colleagues and I. According to IFAW, Cape Cod is one of the few places in the world where dolphins and whales frequently beach themselves, which makes a fast and efficient rescue carrier an invaluable tool. The Sturgis Carrier can support up to 600 lbs and be carried by two people at this time. 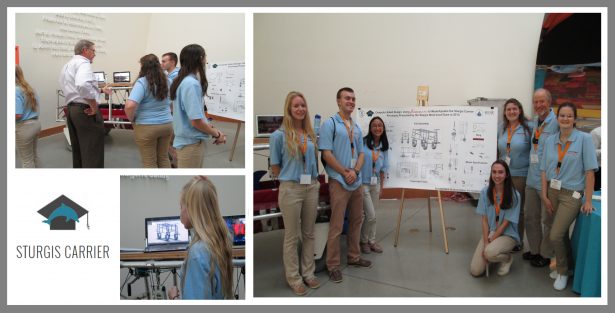 Team twelve came from Thomas Jefferson High School for Science and Technology in Alexandria, Virginia, and they created an automatic precise tourniquet for emergency responders. Referred to as the APT, the automatic precise tourniquet inflates in fewer than 45 seconds to a sufficient pressure for preventing a wounded person from bleeding out before medical help can be reached. The APT weights fewer than five pounds and is easily portable.

Inventors of an exoskeleton for a hand to aid in physical therapy, InvenTeam number thirteem came from Ulster BOCES in New Paltz, New York. Targeted towards people who have lost proper motor skills due to suffering a stroke or another form of brain damage, this exoskeleton aims to help these individuals regain the use of their hands. The device bends and flexes in unique ways to help users relearn different hand movements.

The West Salem High School team from Salem, Oregon, was second to last in the lineup.  These students engineered a clip-on cell phone charger for biomass stoves. Dubbed the KAJI clip, this tool is designed to be able to attach to biomass stoves in Malawi to convert heat energy into electrical energy via thermoelectric generators. A biomass stove is simply a stove which is heated by burning some kind of biological fuel such as wood, charcoal, or animal dung. The idea is that the heat generated by the stove is enough to produce electricity able to charge a basic cell phone in four hours.

The final InvenTeam of the InvenTeams Showcase came from Williamston High School in Williamston, Michigan. They developed an automatic school lock opening device to help students with autism or neurodevelopmental disabilities open their lockers. Oftentimes, students with such disabilities are provided with open cubbies instead of lockers. While the cubbies are easier to access, their belongings are barely protected from theft, which is why lockers lock in the first place. The device created by this team would be programmed with a student’s locker combination and can be held up to the lock. The device will turn the combination and unlock the locker, allowing for the student to keep all of their belongings in a secure place as well as have the ability to retrieve them later.

I would like to congratulate all of the finalists on a job well done. In an astounding array of intellectual prowess, these high schoolers (and even some middle schoolers!) were able to invent and engineer working devices that really do help solve some real-world problems. I’m so glad to have met all of you and I really hope that you all continue to work hard and create great things! Good job!

Rachael Naoum is a student at Worcester Polytechnic Institute (WPI) and a SOLIDWORKS Education intern. She is studying Mechanical Engineering and is a Certified SOLIDWORKS Professional.