Last weekend saw me and the family at our favorite lake. While the kids swam and fished I sat under a beach umbrella trying to keep my pallid English skin out of the strong New England sun.  I don’t tan, ladies and gentlemen–I just go a disconcerting and painful shade of red.  Luckily for me, there was a cool breeze blowing across the beach, but every so often it blew quite strongly, threatening to pull the umbrella out of the sand or flip the shade inside out.

At one point while holding on to my umbrella (and watching every family doing the same), an image of Mary Poppins floating over the rooftops of London came into my head.  I wondered how strong would the wind–and umbrella–would have to be to pick me up and deposit me in the lake. Much to the amusement of my kids I’m sure.

I didn’t think much more about it until I got home, and then my curiosity got the better of me.  A quick email to my colleagues at work soon resulted in a SolidWorks model of the "classic" English black umbrella, and I quickly had my virtual test ready to go with SolidWorks Flow Simulation.  So if I was foolish enough to hold the umbrella above my head at a 45-degree angle, allowing the wind into the umbrella, what wind speed would pick up my 200lbs?

Setting up the problem was very straightforward once I had the umbrella-holding mannequin on my digital beach–all I had to do was set the wind speed and measure the force on the umbrella.  But what is the best way to find the wind speed that would pick me up??  I could set up multiple studies at different wind speeds and run them one after another, but SolidWorks Flow Simulation has a really nice tool called a Parameter Study.  In the parameter study you can change the flow parameters (such as wind speed) to achieve a desired goal, in this case the umbrella lift force.  Once I had set it up it was time to hit run and get the kids ready for bed. The results where soon in and I was both pleased and disappointed to find out that it would require a wind speed of 61.2 mph to lift me off the ground. At that speed, I doubt I would be outside.  Now, the umbrella creates drag as well as lift, and Flow Simulation calculates that the umbrella creates a drag force that is roughly equal to two thirds of the lift.  So at the same time the wind is lifting me off my feet its also trying to push me on my rear. 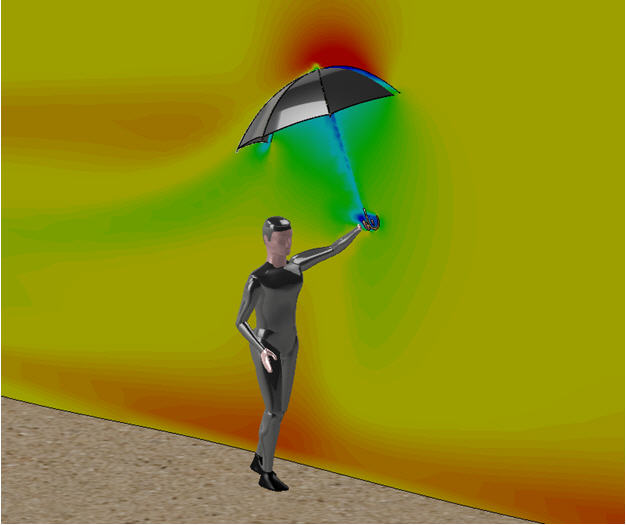 I guess the next step is to design an umbrella that can withstand such extreme winds.  Time to fire up SolidWorks and Simulation again and see what I can come up with…