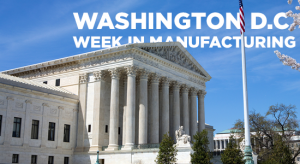 Toyota Announces That its Largest Plant is US-Based
Starting last week, Toyota began production of the first U.S.-built Lexus (the 2016 Lexus ES) in its Georgetown, Kentucky plant. It isn’t often that a company based outside the United States has its largest manufacturing plant in America, but Toyota’s addition of 750 new jobs in Kentucky and increased production from 500,000 vehicles per year to 550,000 makes the Kentucky location Toyota’s largest plant.

To prepare to build the new Lexus, Toyota team members underwent 1.5 million hours of training, including trips to Japan to learn the art of Lexus craftsmanship, spending time behind the wheel of an ES and dealership visits to gain an understanding of customer expectations and service. To learn more, visit here.

Real GDP Slows to 1.5 Percent Growth in Q3
Reduced inventory spending and a continued drag from net exports slowed real GDP growth to 1.5 percent in the third quarter, according to the Bureau of Economic Analysis. Down from 3.9 percent in the second quarter, this slower growth rate remains less than desired. Manufacturers continue to anticipate modest growth moving forward, but their outlook remains guarded, particularly in light current headwinds such as a strong U.S. dollar and weakness abroad. To learn more, visit here.

Personal Income and Spending Growth Slow in September
Down from 0.4 percent growth in each of the last five months, personal income slowed to 0.1 percent in September, according to the Bureau of Economic Analysis. On a year-over-year basis, personal spending has increased 3.35 percent in September, suggesting that Americans are increasing their spending modestly. Overall data suggests that pricing pressures remain quite minimal for now, which continues to give the Federal Reserve flexibility in terms of monetary policy for the near future. To learn more, visit here.