Most of my formative years as a kid were spent in the 1990’s, when the movie Memphis Belle was released.  Being an airplane nerd, it instantly became my favorite film and still is to this day.  It’s not really a critically acclaimed movie, but if you have any interest at all in aviation or World War II history, you must see it.  This movie has it all: it has action, it has drama, and even some pretty great comedic scenes, like one featuring my favorite type of soup.  It’s just a really great story about one of the first B-17 crews to complete 25 missions, a full tour of duty, which allowed the crew to go home. 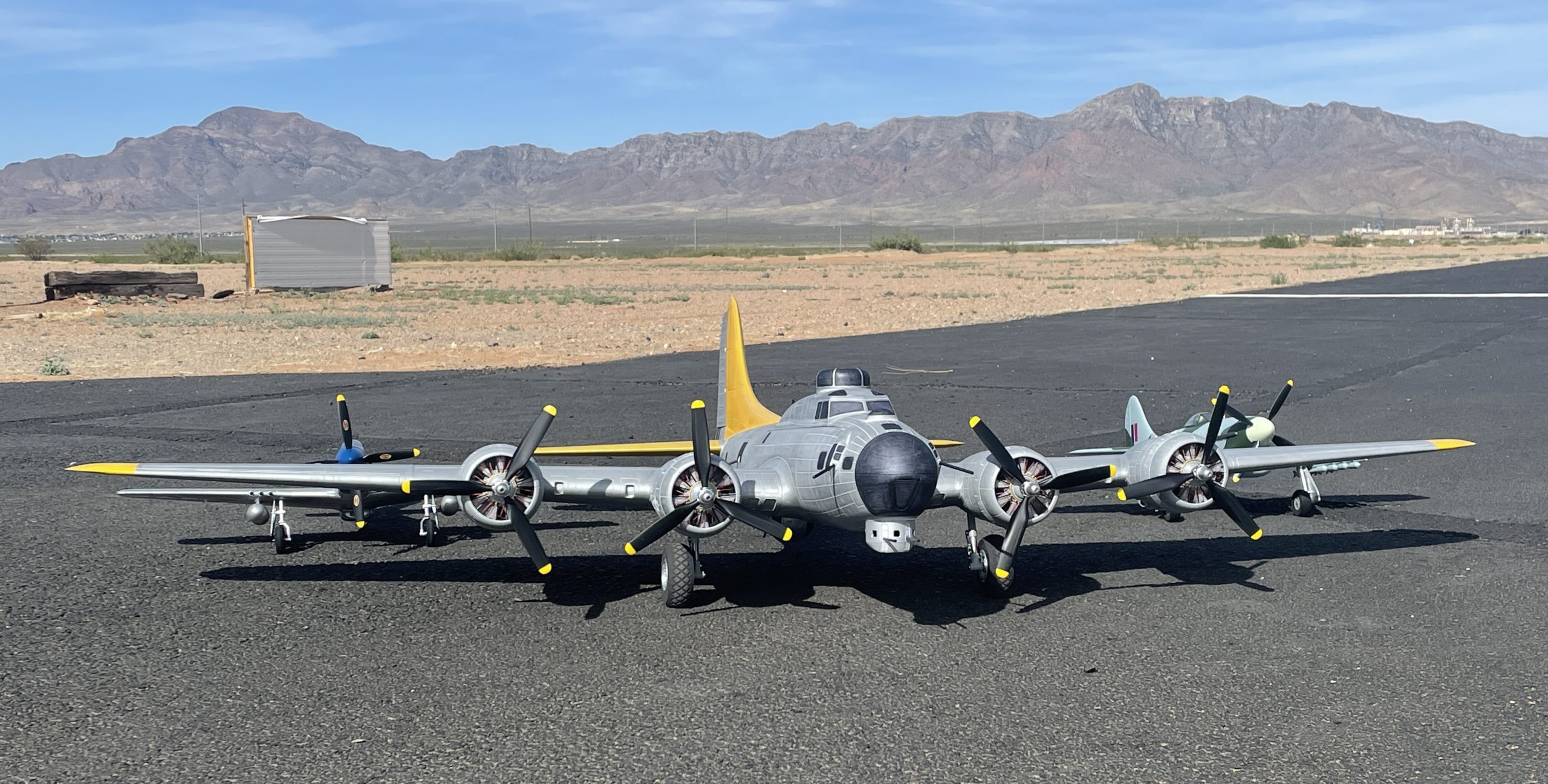 I’m 37 now.  Since I started in the R/C hobby at the age of 12 I’ve dreamed of having a model of the B-17 Flying Fortress. So, with my SOLIDWORKS tools and 3D printers sitting idle in anticipation, I decided to build one.

From the start of this project, I was committed to making the B-17 look as scale as possible.   Little did I know that decision would add around 100 hours of CAD work to the project just designing the scale details like the tire hubs, dummy radial engines, and a ton of simulated panel lines.

This project came introduced some interesting technical challenges as well.  Because this is a four-engine bomber, there is a bunch of equipment installed inside the aircraft that I need to have access to.  So carefully designing various hatches was important.  This included a large, main hatch on top for accessing the fuselage servos and batteries, a rear hatch on the bottom for accessing the tailwheel assembly and the rudder/elevator control hookups, and a hatch under each engine nacelle for accessing the Electronic Speed Controls, main landing gear, and the optional flap servo.  Not to mention, some small hatches to mount the aileron servos to.

The B-17 was produced in several different model versions during its lifecycle, receiving various armament and performance add-ons as World War II progressed.  I personally like the look of the later B-17G model, which, among other things, had a chin turret with two .50 caliber machine guns added underneath the nose.  But some very iconic B-17s that flew during the war, including the Memphis Belle, were earlier E or F Models, which didn’t include this chin turret.   So, I’ve designed both nose styles and the builder can choose which model they prefer.

For the color scheme, I decided to go with a B-17G that served in World War II called “A Bit O’Lace.” It’s a unique color scheme with its natural metal finish and bright yellow tail.  For initial test flights I didn’t completely paint all the details in case of a total catastrophe, but I at least wanted to add the yellow portions for better visibility in the air.

I designed all of the windows (and the B-17 has a bunch of windows) with a 0.5mm recess, so they have a natural border for paint to remain in.  I found it difficult to paint the windows with nice, crisp lines using a brush, so I settled on using paint pens.  This process was pretty enjoyable and made me feel like a kid again, just trying my best to color within the lines.  The resulting windows came out with nice, crisp edges.

The aluminum-colored paint holds shadows well, so it really makes the panel lines and little scale details pop.  I still need to paint some the details, like the turbochargers, in more realistic colors, but seeing the crispness of these little details, even in the plain, base silver color makes that extra CAD time put into designing these details all worth it. 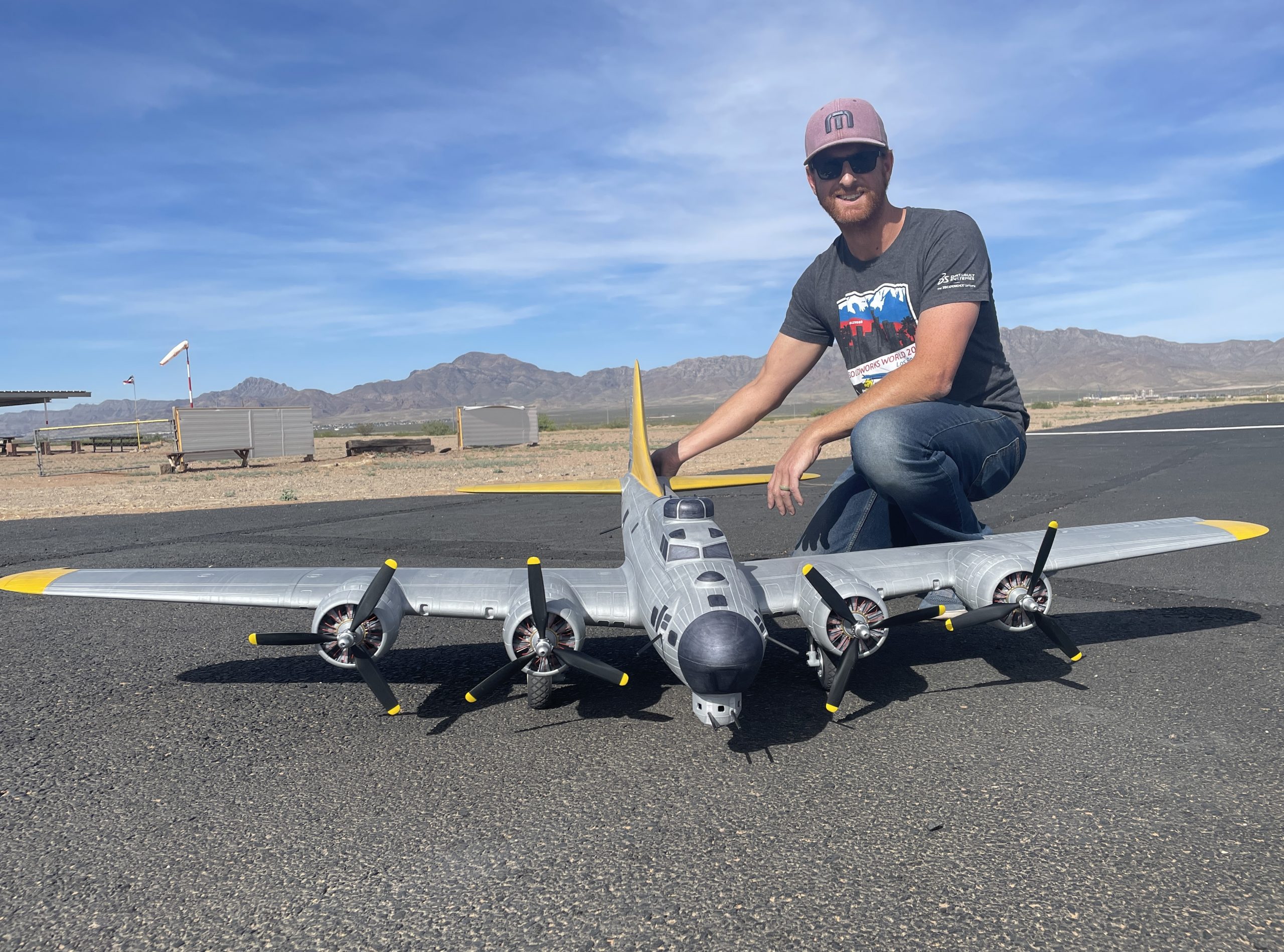 With the wings attached the size of this model is impressive.  It is 1/15th the size of the full-scale B-17, which brings its wingspan to 83”, or about 2.1 meters.  With the batteries mounted as far forward as possible, it balanced perfectly, with no added weight, bringing the final flying weight to just under 5,500 grams, or about 12 pounds.

I couldn’t be happier with the resulting look of my B-17.  But good looks were only half of the goal with this project.  If it didn’t fly, and fly well, I was afraid I’d walk away from this project unfulfilled.  Check out the YouTube video linked below to see the results.

There is just something inspiring about seeing a B-17 in flight.  As I was posting frequent progress pictures for this design on various social media platforms, the posts received a lot more engagement then normal.  The B-17 seems to strike a chord with people.  Whether you are an aviation enthusiast or not, you can’t help but feel some sort of emotion just looking at this plane.  Sure, part of the reason for that is it just looks cool, with all its gunner positions, and the shape of the cockpit windows make it appear it’s flying around with a scowl on its face.  But the thing I personally feel the most when I look at this plane is Respect.  Respect for the crews who operated this aircraft, and the intense situations they willingly put themselves in, in the name of protecting what they unwaveringly knew was right.  Thinking about that makes me question myself.  Would I, or others from my generation, be capable of doing what they did?

Thanks for watching, and as always, I encourage you to never stop exploring, never stop questions, and never stop playing.