Hear ye, hear ye! The SOLIDWORKS Magic Wheelchair Build Team has exciting news for the world: we officially have a ruling monarch and her name is Princess Freyja. On a crisp, perfectly New England autumn day in October, Freyja donned her hand-made satin dress, accepted her regal sash from her big sister Thora, and made her first official royal proclamation: “I look like a girl scout princess!” 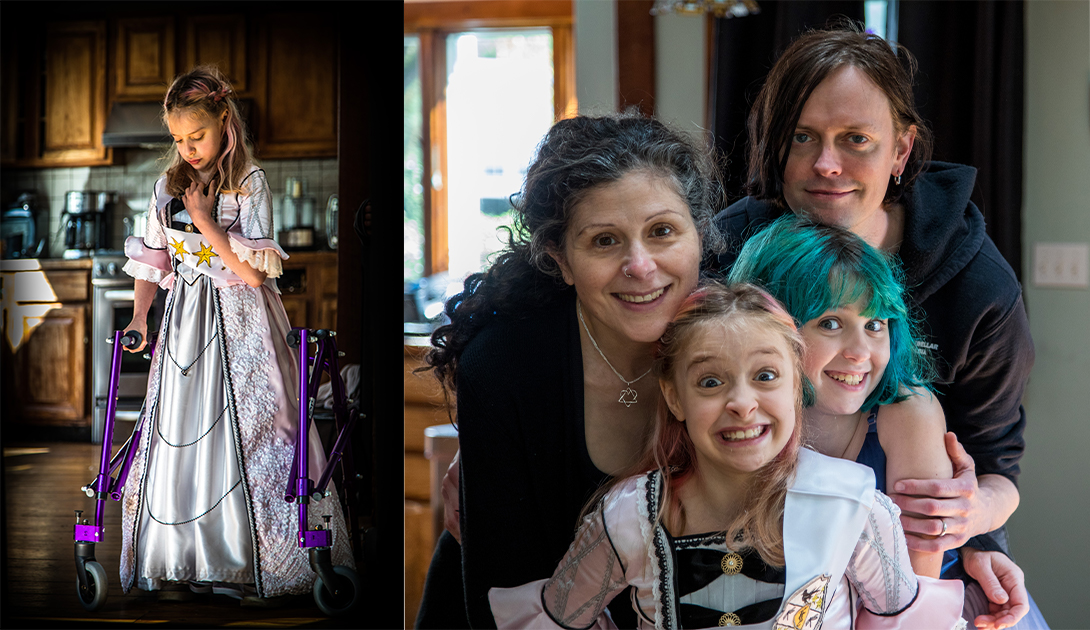 Left: Freyja in her dress. Right: Freyja and her family, Aimee, Johnny, and Thora.

Everyone present laughed. Rachael Naoum, Annie Cheung, Arnav Mukherjee, and I had been invited to Freyja’s house to watch and document her as she appointed her regalia (i.e. put on her dress). We joined Freyja’s sister, mother, father, and grandmother in admiring her outfit, but the group wouldn’t stay that small for long.

In a few hours, over 40 friends and family, along with local Massachusetts-based build team members, would come together to see Freyja’s completed costume and celebrate her tenth birthday. People came from near and far. Freyja was most surprised and delighted to see Medha Palnati, her favorite counselor from Double H Ranch camp, who came all the way from upstate New York to see Freyja’s coronation and join the fun. 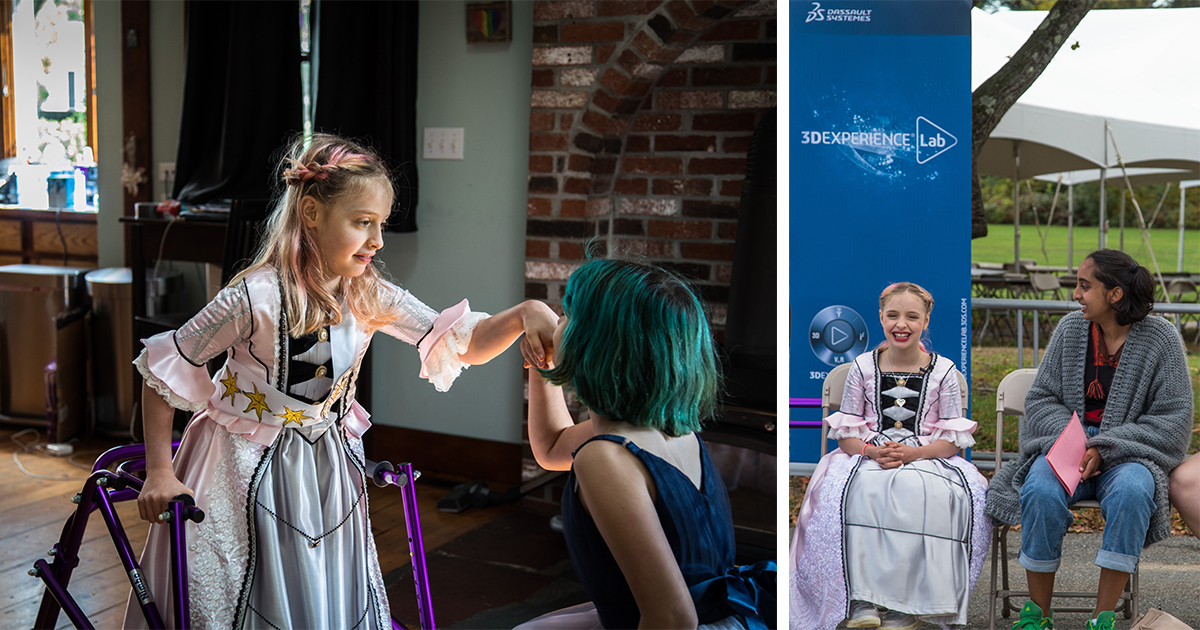 The celebration was held outside of Freyja’s elementary school in the open air, where people could remain socially distant and feel safe. Freyja and many of her friends are still too young for the COVID-19 vaccine, and it was important to her family and SOLIDWORKS that everyone felt comfortable and secure in such a large group.

In the hours before Freyja and her guests arrived, the local build team was hard at work putting her costume together. After months of designing and planning and fervent weeks of cutting, milling, coding, painting, sanding, threading, and beyond, the costume was finally ready for presentation. In the previous two weeks, build team members stayed in the 3DEXPERIENCE Lab well past midnight creating the costume and all of its accoutrements. 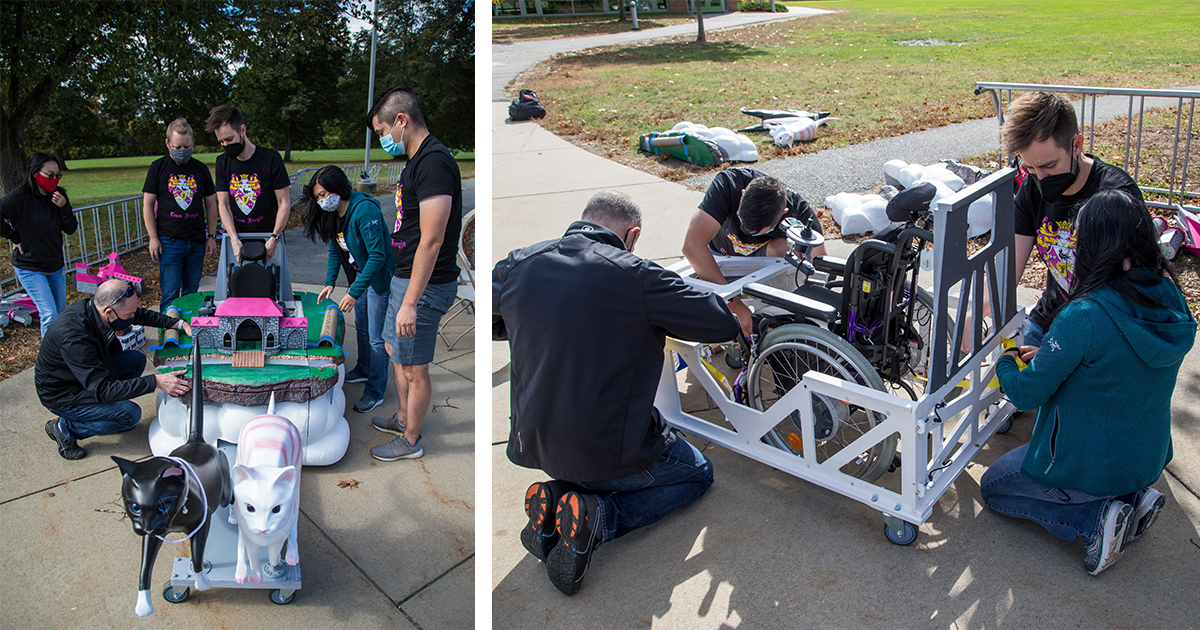 The build team putting Freyja’s costume together at the school

The day of the reveal was the first time many of the build team members saw the costume in its final form. And while all involved were proud and impressed, there was only one person whose opinion really mattered: Princess Freyja. The team draped the costume in sheets and laid down a pink table cloth on a folding table where they placed other gifts for the princess and her family.

Freyja’s family arrived at the school a little early to greet the guests. With her pink hair plaited and her face full of makeup, Freyja looked adorable and imperial at the same time, showing the full force of her inner princess power. Aimee, Freyja’s mother, had sent out invitations to the reveal/birthday party and had goody bags full of chips and snacks waiting for party goers. The build team borrowed chairs from the school’s tented outdoor eating area and set them up on the curb so people could get front row seats to the reveal. 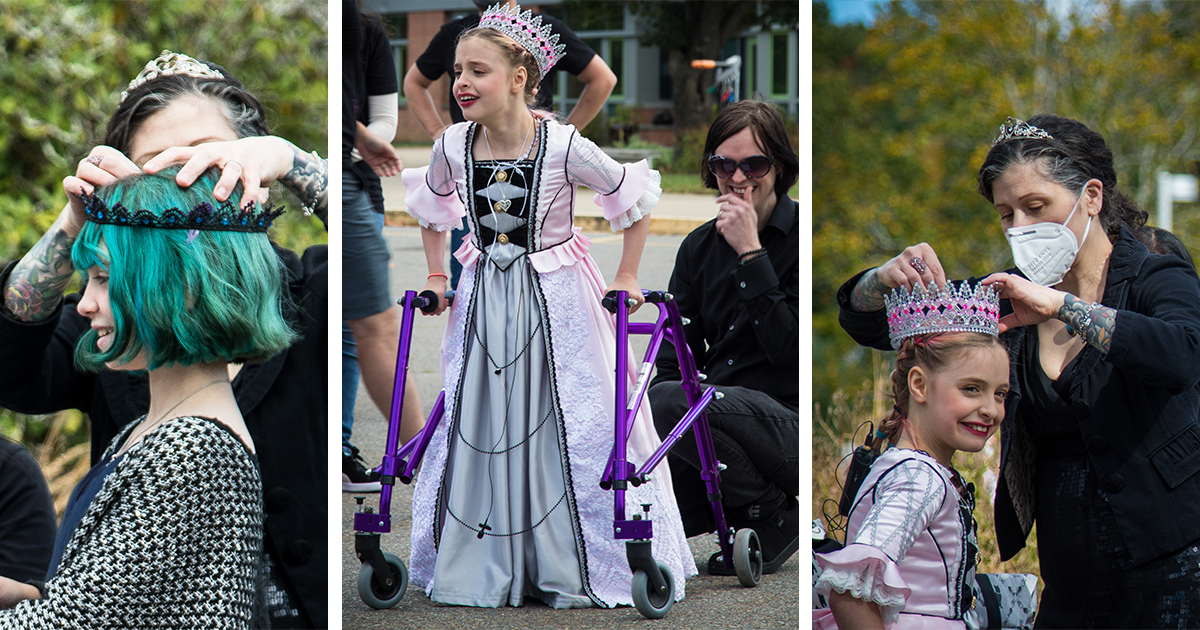 At two o’clock, it was time. The build team gathered next to the covered costume while team leader Annie stood with Freyja and her family and started the gift presentation portion of the proceedings. After complimenting Freyja on her beauty and her dress, Annie asked, “What else do you need to be a princess?” From a bright green bag she pulled out a special crown made just for Freyja. Presented on a pillow inside a glass cloche, the sparkling pink and silver crown matched Freyja’s dress and made her jaw drop. Aimee and Thora helped Freyja put the crown on, and then Thora was surprised with her own present: a glittering black princess crown. Both sisters got to be their royal selves for Freyja’s birthday.

There were more gifts to be had. Annie found Thora’s art on Instagram and made her a metal print on a wooden base. “This is a picture I drew a really long time ago,” Thora told the crowd. “I’m snuggling a cat here, this is my dad, this is my mom with a cat on her lap, and this is Freyja in the bathtub.” The guests all cheered while parents Aimee and Johnny looked on in pride and delight. 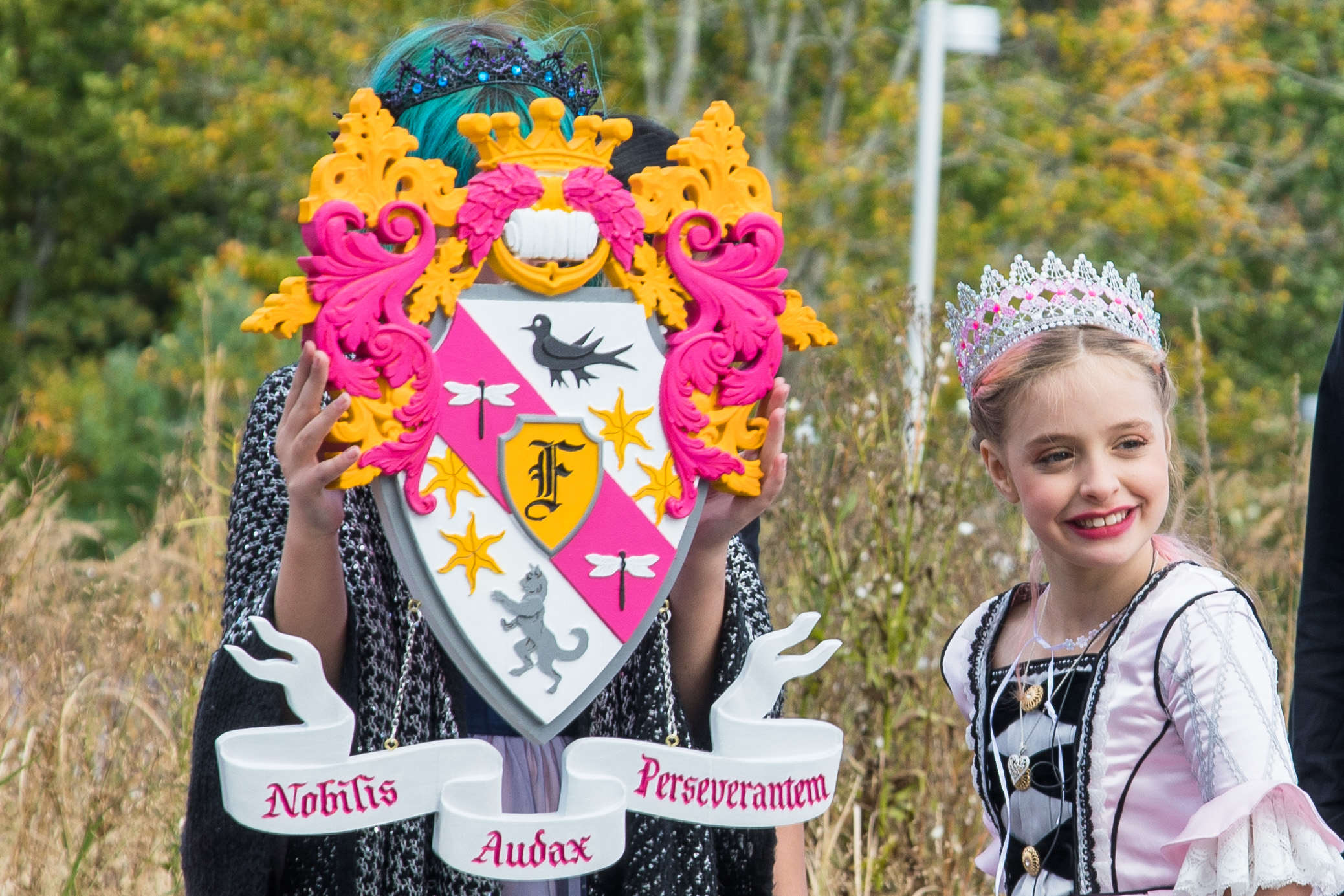 Then Thora helped Freyja open another gift.  Build team member Chinloo created a nightlight just for Freyja, with a dragonfly design and the words “Princess Freyja” etched into it. When the nightlight was turned on (thanks to a portable battery), Freyja gasped, “Oh my gosh, that is so cool!” Then Freyja’s whole family was presented with two t-shirts: one emblazoned with the royal crest the build team created for Freyja and the family, and one with the Magic Wheelchair logo on it.

The final gift before the BIG gift was the royal crest itself. The design on the build teams t-shirts was brought to life and hand painted. Upon seeing it, Aimee burst into tears. “She’s happy, she’s happy,” Johnny assured Freyja. Thora showed the crowd the bird, dragonflies, and cat on the shield (some of Freyja’s favorite animals) and everyone admired the Latin adhered to the bottom: Nobilis, Audax, Perseverantem. Noble, bold, perseverance. Three words that absolutely describe our princess and her family.

The moment of the reveal.

Once the happy tears were wiped away, it was time for the main event: the reveal of Freyja’s costume.

“Okay Freyja,” Annie said to a smiling princess. “You have your dress! You have your crown! What’s the last-last thing every princess needs?”

“Uh huh!” said Annie. “Are you ready to see your castle?”

The crowd shouted out, “Three! Two! One!” and the build team pulled off the drapes, revealing Princess Freyja’s castle.

As the crowd cheered, Freyja gasped and her hand flew to her heart. Eyes wide, she finally gazed upon the castle built just for her. 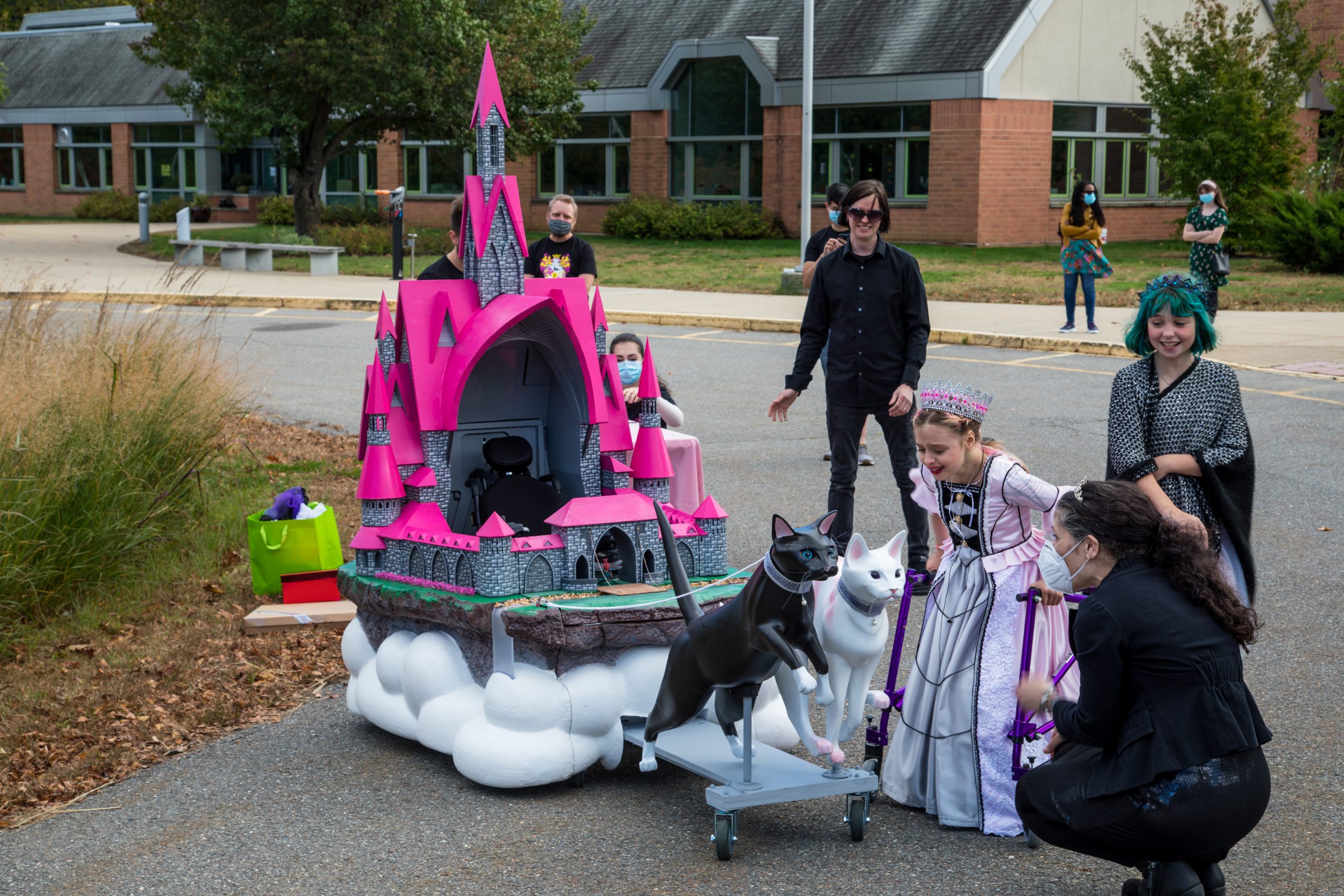 Freyja and her family admire her castle.

Over seven feet tall at its highest point, Freyja’s castle lives on top of clouds. With pink roofs on its many towers and hand painted stone walls, it is the most detailed costume the SOLIDWORKS Build Team has made yet (and that’s saying something). Freyja’s castle has a drawbridge hanging over a light-up moat the flows into waterfalls cascading down both sides of the costume and into the clouds. The two hand painted “stained glass” windows are lit by flickering LEDs, as though there are candles burning inside. On the grounds outside the castle are metal pink shrubs with sparkling fairy lights woven through them. There are lights on the bottom of the clouds which change color. And the castle is pulled by two larger than life 3D printed cats: Princess Freyja’s favorite animal, and a callback to the Norse goddess Freyja, whose chariot was pulled by two cats as well.

Of course, Freyja went straight to the cats. She pet the pink and white one for a moment, then turned to her mother and said, “I’m crying too!” It was hard not to cry, watching her and her family’s reaction to the costume. 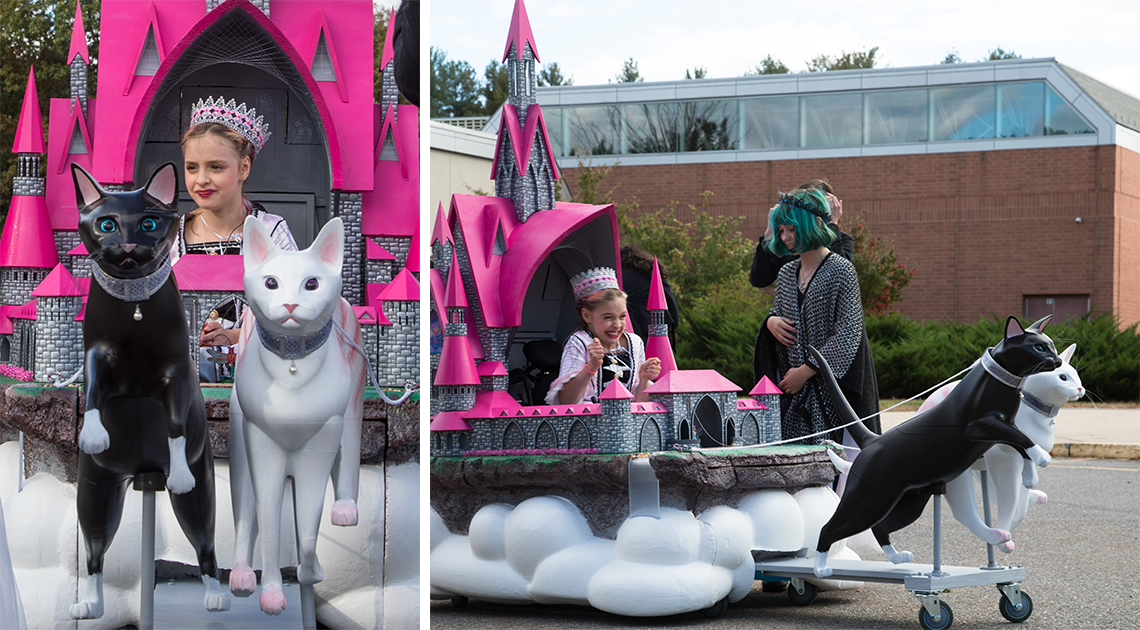 Princess Freyja in her castle.

“Did we capture what a Princess Freyja world would be?” Annie asked. Freyja nodded enthusiastically and then called to the crowd, “And look, there are two cats!”

Then it was time. Johnny lifted Freyja into her wheelchair and everyone broke into raucous applause. The princess was finally in her castle.

One of the main concerns the build team had while creating the costume was the weight. While built to be as light as possible out of foam and wood, the sheer size of it (along with the 3D printed cats that each weighed over 10 pounds) seemed like it could be daunting for the small motor attached to Freyja’s wheelchair.

We quickly discovered there was no need to worry. As the crowd hollered, cheered, and clapped, Freyja began driving around in her castle. Freyja practiced her princess wave as she drove, then chased her sister up and down the road, laughing maniacally. A smile never left her face as drove in her castle and showed her gift to her friends and family. 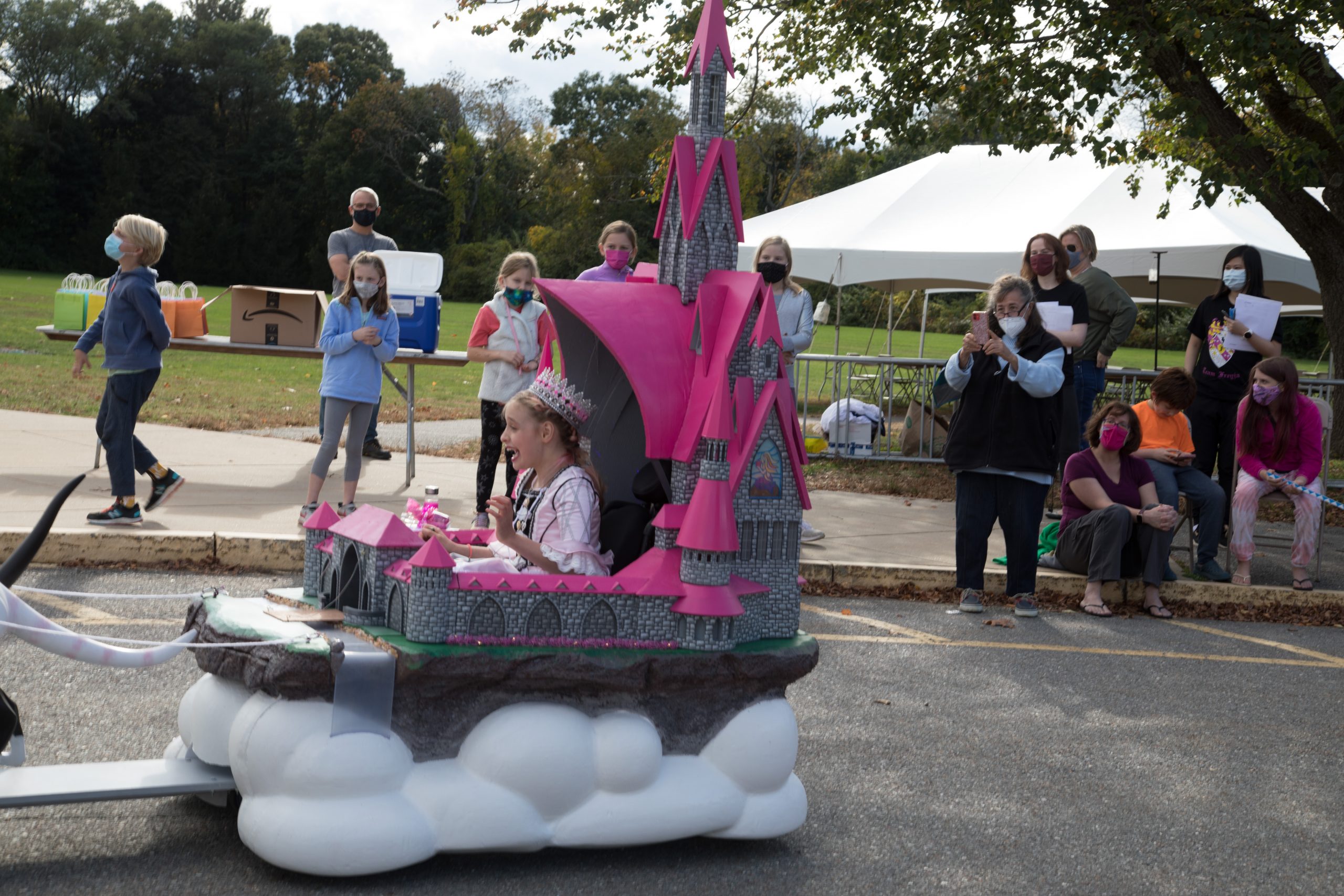 Freyja and the crowd.

The rest of the time at the party was divided equally between guests coming over to admire the costume and frantically running away when Freyja sped towards them. The cool fall air was filled with laughter and happy chatter from a group of people coming together for a girl who brings love and fun with her wherever she goes.

“Hey Magic Wheelchair team!”  Medha called out. She led Freyja and her family in a camp cheer: “TH-AN-K-Y-O-U! We thank you, we thank you, we love you!” The crowd and the build team applauded and cheered right back at them.

Everyone on the build team agrees it was beyond lovely to be cheered for and thanked, and all those involved are humbled by and grateful for the gratitude. But watching Freyja enjoy herself as the sparkling, vivacious princess she always has been, for us, was the best gift of the day. 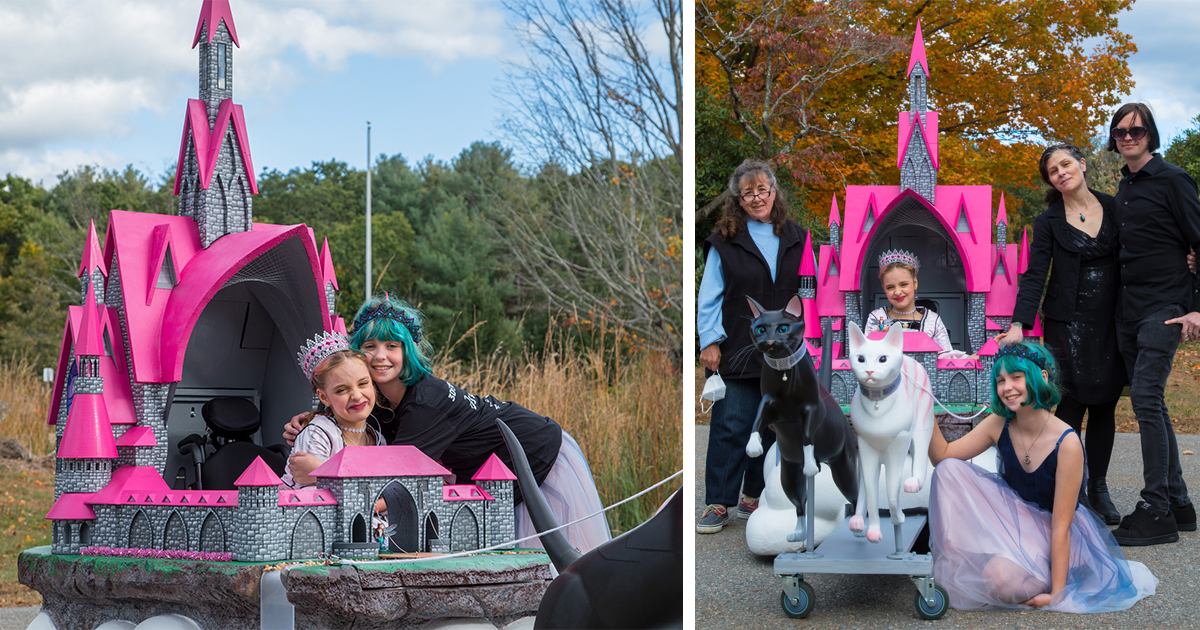 Princess Freyja and the Royal Family

Want to learn more and see video from this royal reveal? Be sure to tune in on Thursday, November 4 at 11 AM for a special episode of SOLIDWORKS Live that’s all about Freyja and the Magic Wheelchair reveal. 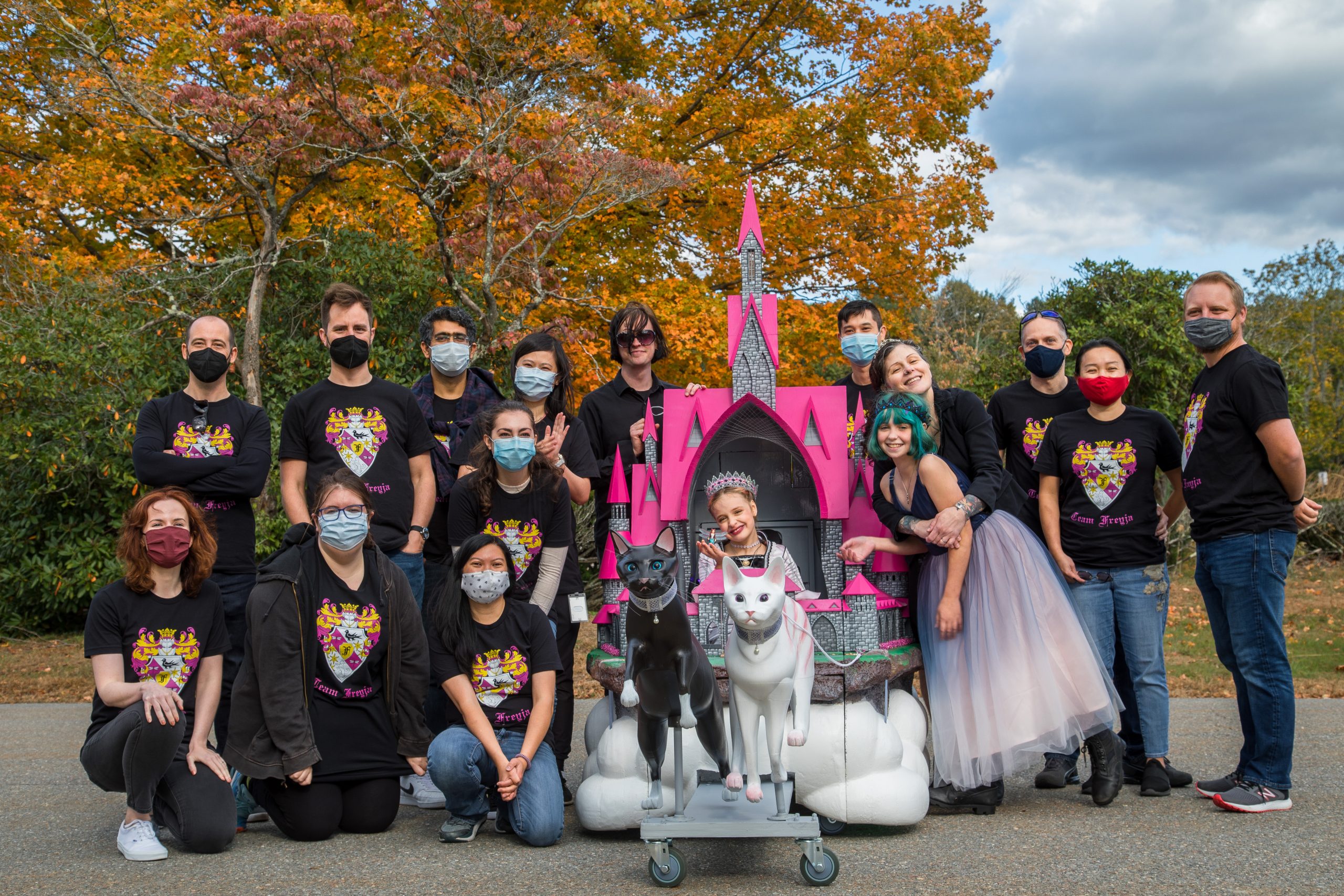 Princess Freyja, the Royal Family, and the local build team

We always give thanks to the crew at Magic Wheelchair, especially Christine Getman, for their friendship and support. And we are grateful to Willard Elementary School for allowing us to use their grounds to reveal Freyja’s costume, and to all the friends and family who showed up to support our princess.

Finally, this entire project would not be possible without Freyja and her incredible family and friends. It was an honor and a pleasure to create a special experience for a spectacularly sassy and royally rambunctious kiddo. 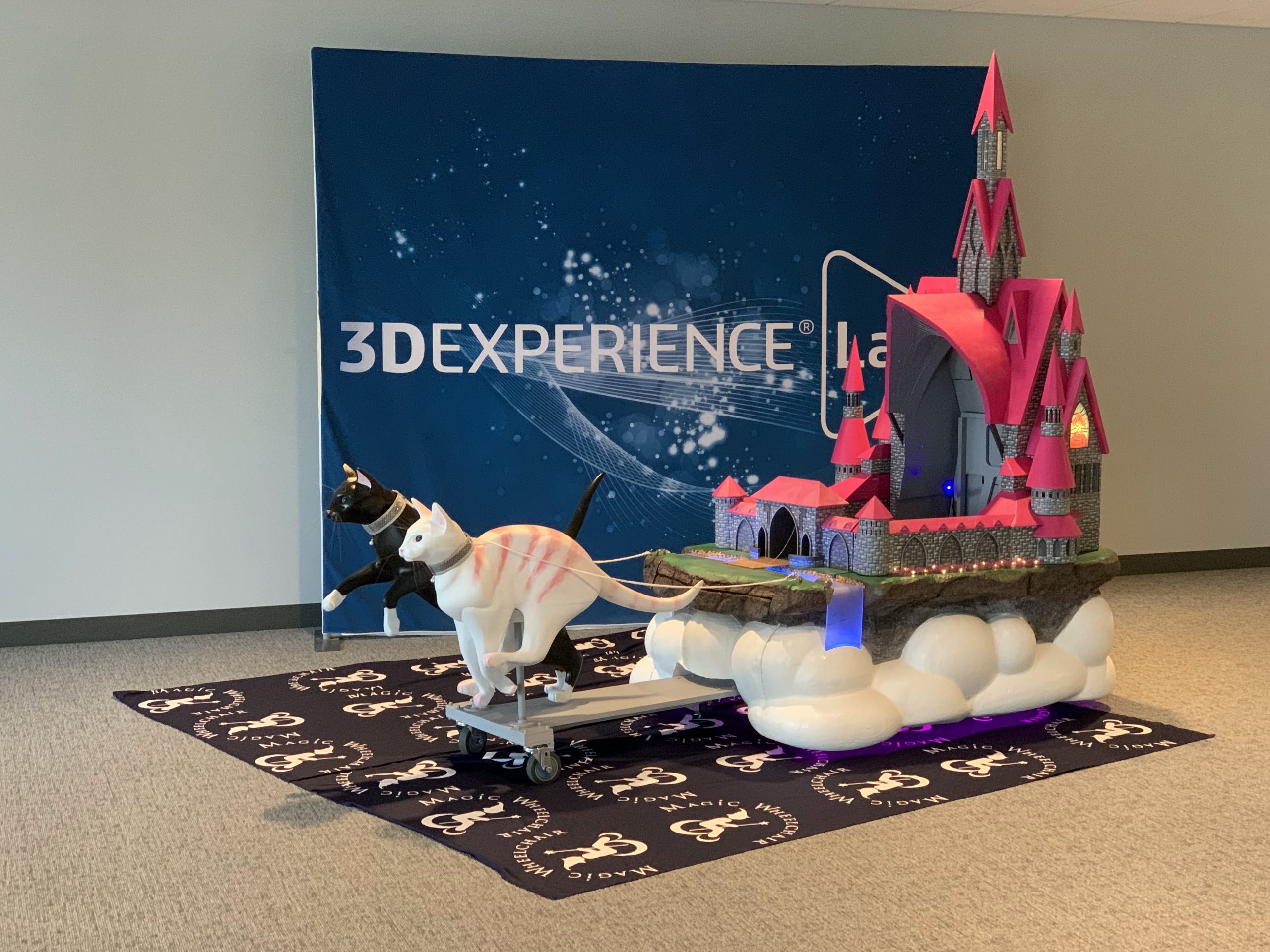 Magic Wheelchair project is proudly accelerated by 3DEXPERIENCE Lab and supported by Dassault Systèmes US Foundation.The 3DEXPERIENCE Lab is the global startup accelerator and open innovation program of Dassault Systemes and is committed to empowering startups and makers with ideas that can potentially shift scales of innovation in their particular domain. In case of Magic Wheelchair, the project scored super high on its ability to leverage collective intelligence and 3DEXPERIENCE platform solutions to create huge impact on society.

The 3DEXPERIENCE Lab is made of up passionate makers, and any team of volunteers who want to work on building an epic Magic Wheelchair costume will be provided with free access to the 3DEXPERIENCE platform. The platform has a full range of 3D modeling, collaborative, information intelligence and simulation apps, including industry leaders CATIA, SOLIDWORKS, xDesign, SIMULIA, and 3DSWYM. We invite anyone interested to join our community. 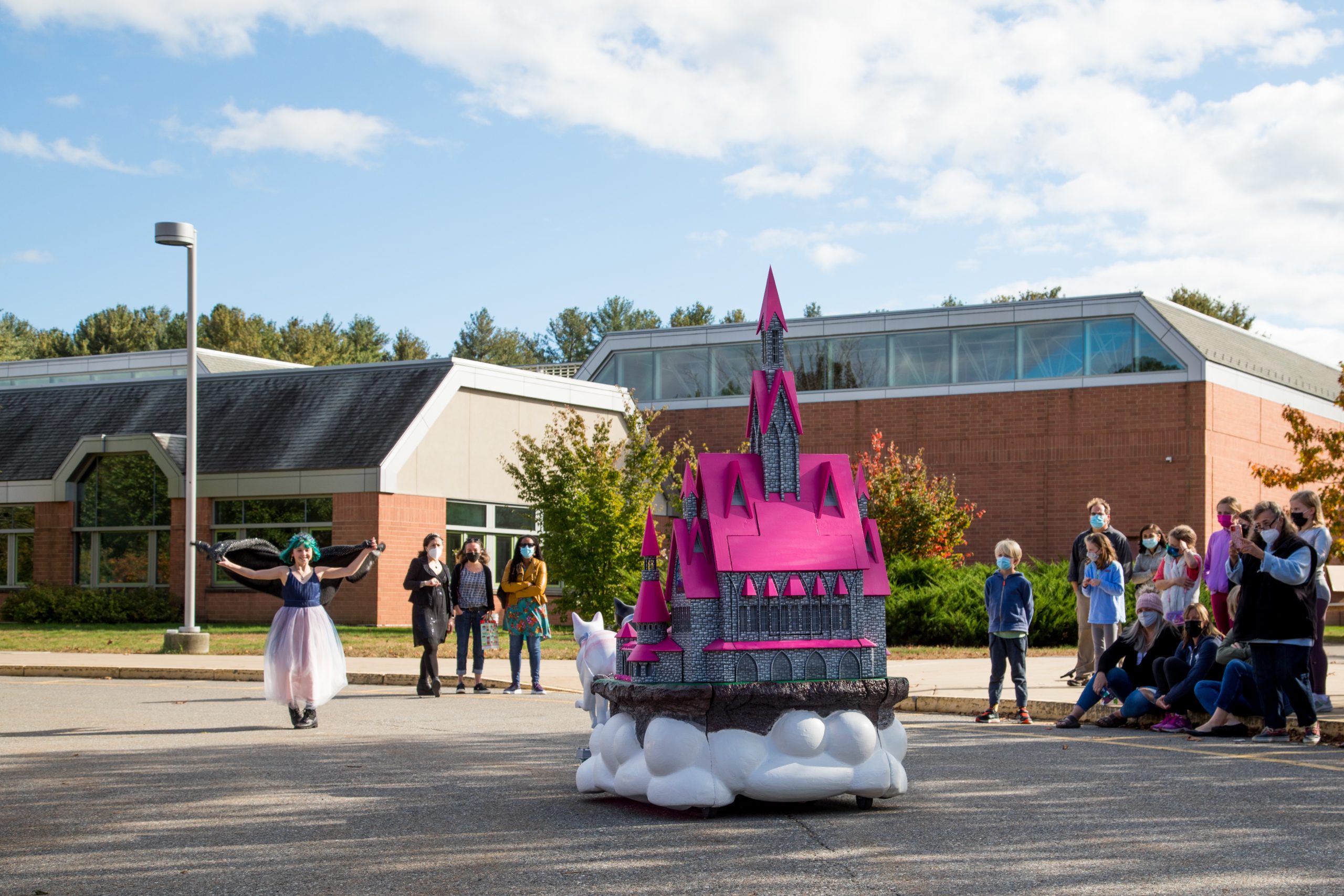 You can still get involved with Magic Wheelchair by starting your own build team or donating in Freyja’s name on her Classy.org page. You can also help support inclusion and outdoor programs for children with serious medical conditions by donating to Freyja’s favorite camp, Double H Ranch.

In the weeks to come we’ll have more blogs revealing the details of the costume and showcasing how the team created Princess Freyja’s castle. Get ready for a lot more princess power!