It’s summer and here in Pennsylvania, we’ve had some blazing hot days. And, in some of their recent videos, Linus Tech Tips has showcased blazing fast renderings while testing powerful GPUs using SOLIDWORKS Visualize.

No, I didn’t just write this article for the purpose of writing out that intro. But if I had, would you really blame me? 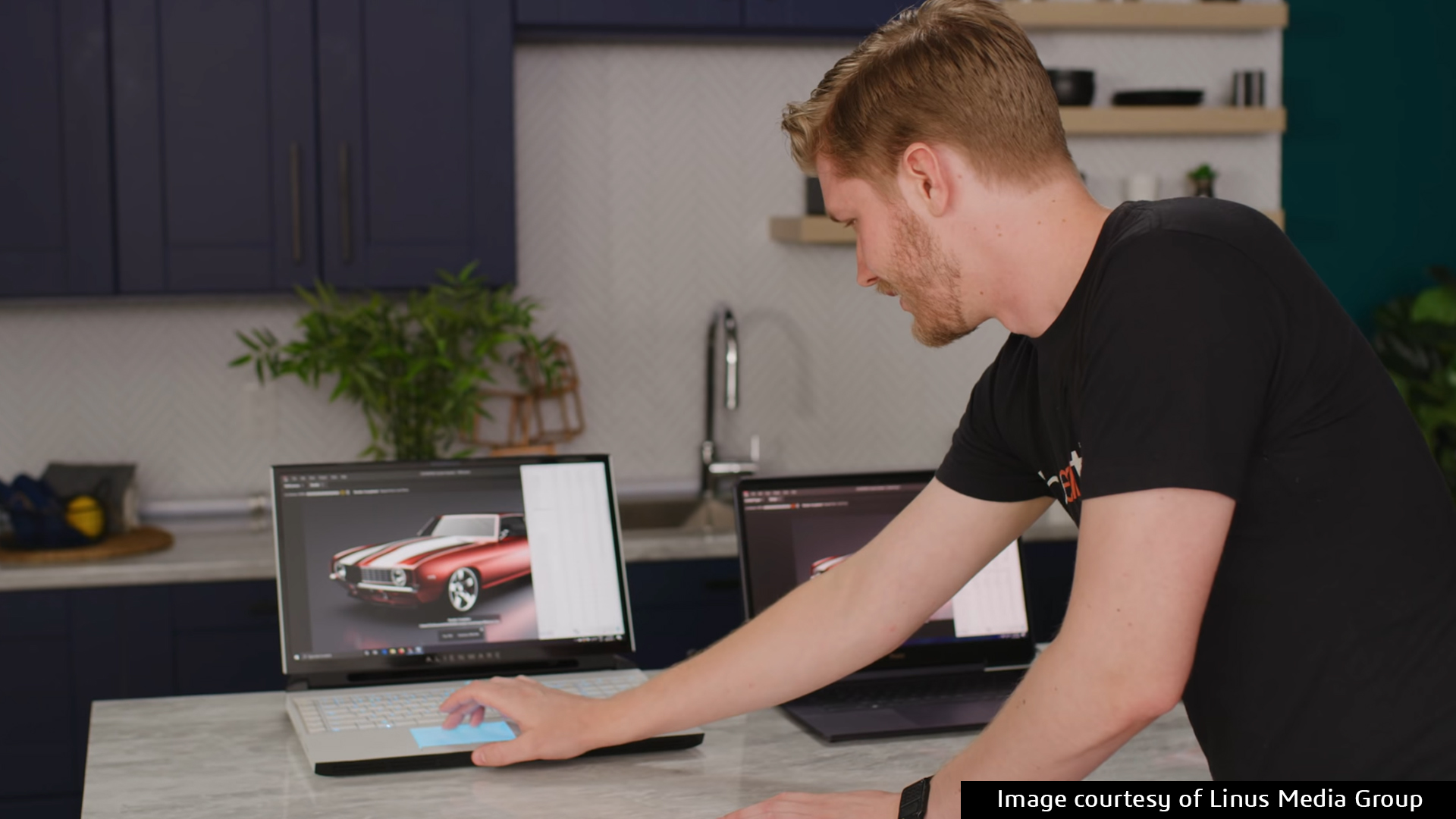 Our friends at Linus Tech Tips are back using SOLIDWORKS products to explore a topic I can assure you that SOLIDWORKS users like myself love to geek out over. Namely: GPUs! Last time we checked in with them on the SOLIDWORKS Blog, we talked about how Linus and SOLIDWORKS Champion Alex Clark were busy using SOLIDWORKS Flow Simulation to perform transient analyses on cooling mods to an 8K camera.

This time, they’re using SOLIDWORKS Visualize – their go-to in this area – to test, at a side-by-side level, the relative power of several GPU configurations on different engineering laptops.

Here’s the video, started at the point where SOLIDWORKS Visualize is introduced prior to Alex performing a basic ‘race to rendering’ test, with three separate machines seated next to one another hosting three different NVIDIA GPUs.

If you’ve used SOLIDWORKS Visualize for its beautiful, lifelike raytracing rendering capabilities in the past, you know that there are many, many factors that can influence the speed at which an image (or an animation) renders for us. Factors may include: output image size, DPI, number of passes, etc.

Of course, another factor is the source media. In other words: what are you rendering?!

In the interest of performing a more uniform test, Alex equalized the source project and the settings within Visualize across the board. The source project in this case was a nifty ’69 Camaro, which is probably a fileset you’re used to if you’ve ever opened Visualize. It’s right on the home screen! 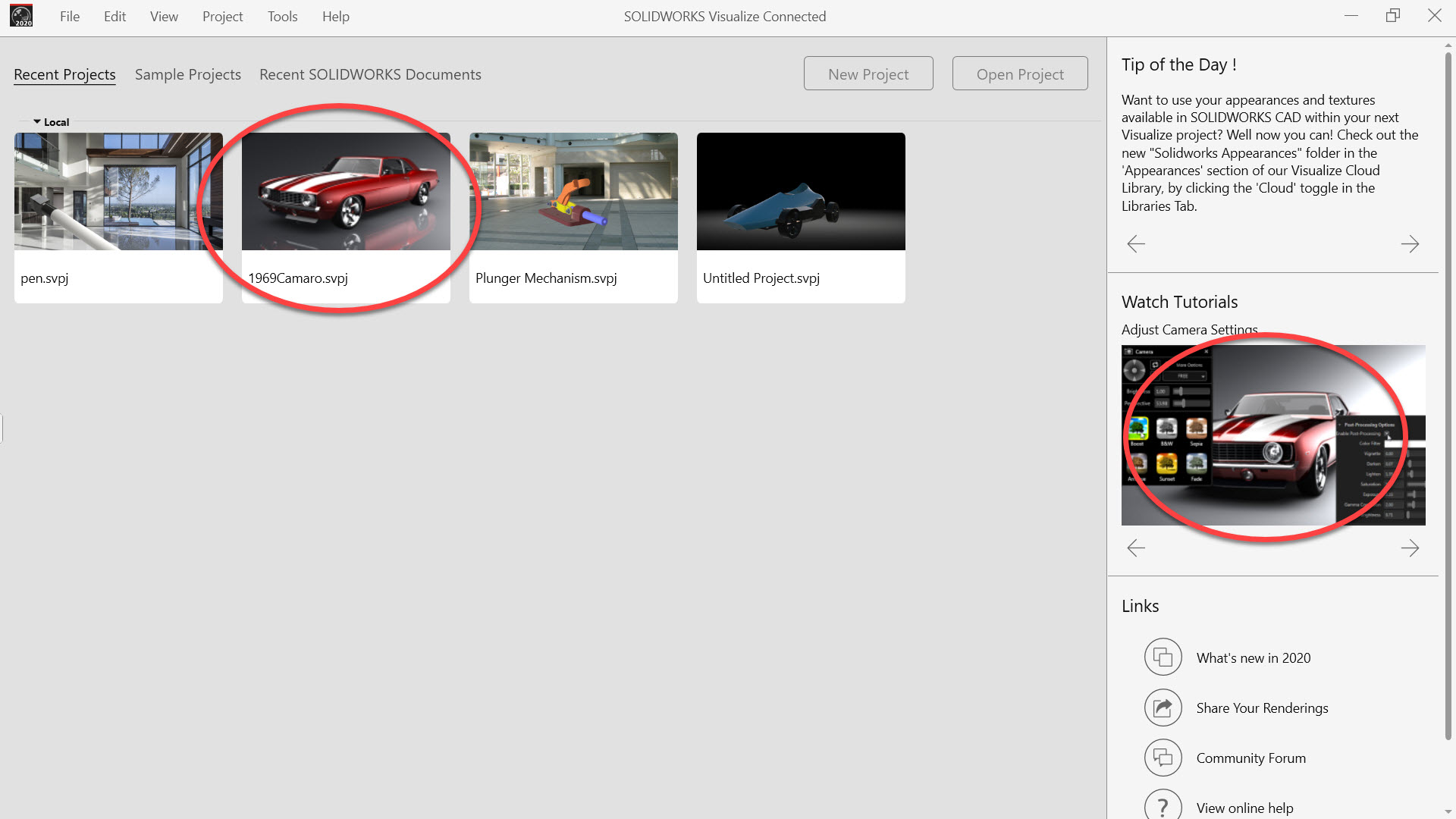 Here, you can see me using SOLIDWORKS Visualize Connected (incl. in the new 3DEXPERIENCE SOLIDWORKS Offers), connected to the cloud so that anyone in your company can store and access 3D data for renderings via the 3DEXPERIENCE platform. And hey, there’s that ’69 Camaro!

Spoiler alert if you haven’t watched the video embedded above yet: the fastest time to render was under 2 minutes! And with it doing 1000 passes for an image sized 2560×1440, that’s a pretty high fidelity output for a lifelike looking image that you’re good to go with for your next pitch deck or product catalog in not even a couple of minutes.

Think about how many things you can do in under 2 minutes. In terms of productivity, getting an amazing look at your products has to rank very high on this imaginary list.

While these videos are hugely entertaining, I also want to note that there are many ways to ensure you’re working on a technically supported workstation configuration when it comes to SOLIDWORKS Visualize. One of the best ways is to check out this site, which contains recommended drivers for many popular cards from several manufacturers.