A significant aspect within the midstream stage of the petroleum market is storage. Above-ground storage tanks (ASTs) are commonly used as a container to store petroleum products. In order to comply with regulations, AST facilities are focused on operational integrity. This includes periodically inspecting the inside of the tanks to assure proper performance. However the inside of a petroleum AST can be a challenging environment to inspect. Currently most inspections are done by taking the AST out of service, which means the tank is drained, opened, cleaned and then a manual nondestructive testing (NDT) inspection in performed. Repairs are completed, if necessary, but often after inspections these tanks don’t require repairs. Taking a tank out of service is time-consuming and highly disruptive to tank operations.

Square Robot’s solution keeps the AST in service. By using an autonomous hovering robot the field team can provide refinery and terminal operators with tank floor survey data, allowing for failure prediction without disruption of service. The petroleum product is left in the tank, the robot is lowered into the tank where it then detects and maps all obstacles before beginning a grid survey of the tank floor, collecting thickness measurement data with up to 95 percent coverage. Not only does using the robot for inspections avoid putting humans in confined areas, but the robot is also capable of collecting a superior dataset than a human could. Therefore, the autonomous hovering robot help tank owners manage the AST integrity and matches their commitment to collecting the best datasets while operating at the lowest risk level. 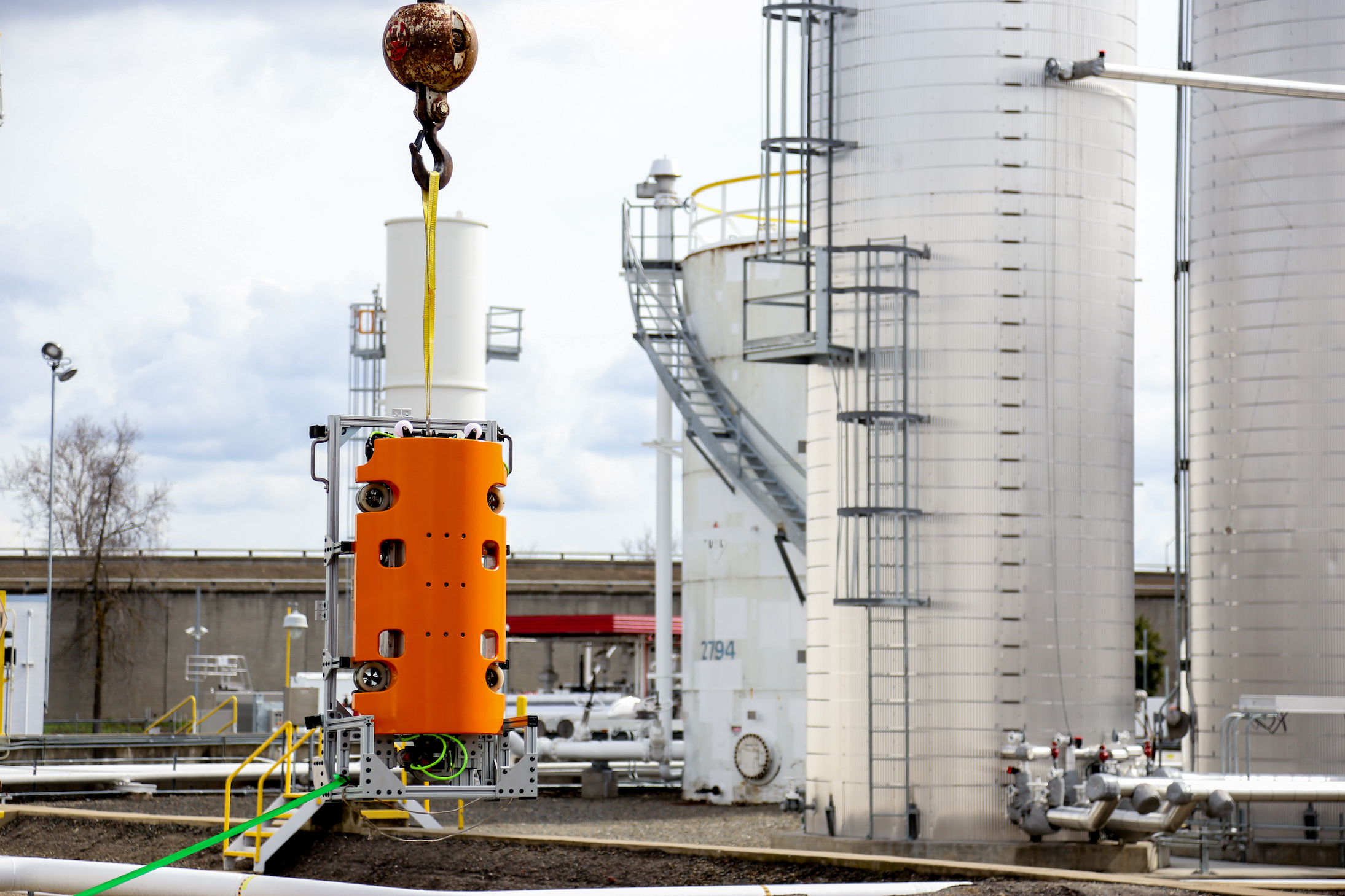 As the founders of Square Robot began building a talented team, they brought on engineers with autonomy backgrounds and a passion for sub-sea robotics. Some initial team members were proficient with SOLIDWORKS so it was selected as the CAD program to develop the robotic inspection systems. The team began to grow, including remote workers, so the need to share revision-controlled CAD data between multiple locations arose. Additionally the founders had implemented a no-local-server policy to reduce IT overhead. Therefore, this CAD storage solution needed to be cloud-based. At this time it just so happened that the SOLIDWORKS 3DEXPERIENCE® data and lifecycle management Lighthouse Program was kicking off. Square Robot figured the best move was to try the cloud-based offering, specifically 3D Component Designer and Project Planner directly from SOLIDWORKS.

Prior to using 3DEXPERIENCE data and lifecycle management solutions the team of about five SOLIDWORKS users would use Google Drive to store SOLIDWORKS parts, assemblies and drawings. Google Drive is capable of storing CAD data but not in an intelligent way that maintains revision history and relationships between assemblies and their related items. Large CAD datasets would be exchanged between users via Pack and Go’s. This required one user to be the main organizer of the top-level vehicle model and be very diligent when selecting what items to override in their local files. This method is time-consuming, burdensome to the main organizer, prone to human error, and it doesn’t easily facilitate collaboration.

Migrating to the 3DEXPERIENCE platform helped fast track collaboration and the team can now instantaneously synchronize CAD data over long distances. One person no longer needs to be the main organizer of the top-level model. 3DEXPERIENCE data and lifecycle management solutions helped the team take care of that organization, making it easy for multiple users to trade off making edits to high-level assemblies. The platform maintains revision history in one location and eliminates the teams need to archive Pack and Go’s to retain old revision models.

The platform also prevents edits to parts by maintaining them in a Read-Only state, requiring users to actively reserve items if they want to edit. Reserving items avoids multiple users from simultaneously editing the same item and making duplicate or contradictory changes. Item reservations also help indicate to users what other team members are actively working on. The 3DEXPERIENCE data and lifecycle management solutions run in a browser and seamlessly integrate with SOLIDWORKS desktop solutions. Through a web browser non-SOLIDWORKS users, such as project managers, have been able to use the 3DPlay app to view items using functions such as rotate, explode and measure. This capability allows managers to get a better understanding of the design or check the progress of a project without disrupting the designer.

Square Robot has been using 3DEXPERIENCE 3D Component Designer and Project Planner for nine months now. As with any new solution, there was a learning curve, but in general, the solutions are intuitive and getting started with them was fast. The 3DEXPERIENCE data and lifecycle management solutions run in the cloud, are instantly available and seamlessly integrate with SOLIDWORKS out of the box. And since they run in the cloud, the setup effort was minimal.

The data and lifecycle management solutions helped solved Square Robot’s CAD sharing dilemma by effectively connecting multiple SOLIDWORKS users across far distances without investing in hardware infrastructure. The team’s collaboration speed has drastically been improved by leveraging the superior job that the data and lifecycle management solutions do at storing and organizing configurable and revision-controlled data. For Square Robot, as a start-up that finds it important to move quickly and accurately without IT overhead cost, the 3DEXPERIENCE data and lifecycle management solutions have been immensely beneficial. Square Robot is only scraping the surface of the available capabilities on the 3DEXPERIENCE platform and is excited to continue exploring the opportunities to improve its organization’s daily workflows.

Learn more about how 3DEXPERIENCE data and lifecycle management solutions are helping Square Robot improve its daily workflows without having to invest in costly IT infrastructure.

With eight years of mechanical design experience on underwater and land based robotic systems his focus is on developing robust and user-friendly autonomous vehicles for harsh environments. He holds a Bachelor of Science in Mechanical Engineer from Northeastern University. Outside the office his hobbies gravitate towards building apparatus that can launch him in the air especially on skis.