Today we conclude our blog series brought to us by car enthusiast and SOLIDWORKS Senior Area Technical Manager Mike Sabocheck on SOLIDWORKS at the SCCA Run-offs at the Indianapolis Motor Speedway. If you missed day one, you catch up here and you can find out what happened on the track on Day 2 by reading Wednesday’s blog post here and results from Day 3 here and results from Day 4 here. Now let’s let Mike catch us up now on what happened on Race Day.

This day is by far the most stressful and high-anxiety day of the week. All the work that went into this season’s racing comes down to this race. An SCCA National Championship is at stake and Team JBS has a good shot at a podium finish. Even being in the top 10 out of 42 competitors will be a satisfying end to the season. About the only thing we do before a race is go through mental checklists, making sure everything on the race car has been checked and re-checked. The drivers get their game face on by spending some time alone and mentally driving the track. I take care of gathering everything we’ll need in the pits just in case and preparing the car for the tow to the false grid.

Indianapolis Motor Speedway is a huge complex. When you consider the track for the Indy 500 and NASCAR Brickyard 400 is 2½ miles around the area inside the track is extremely spacious. For us to get to the false grid it’s about a 10-minute tow. Our paddock spot is in the north paddock and grid is in the south area near turn one of the Indy track. Our race is 19 laps long, and we race on the Formula 1 road course built in 2008, which uses the front straight of the Indy track and a bit between turns 1 & 2. We race clockwise like Formula 1 whereas Indy and NASCAR cars race counter clockwise. Here’s a map of the track.

Gridding is a straightforward process. You know where you qualified and you head for that spot. The grid is marked off and the grid workers will help you back up into your spot. The drivers are already in the car so they spend time focusing on driving the track. At this point we finish the process of belting the driver in and hooking you the HANS device and radio. We’ll check the radios and the wait for the 5-3-1-minute countdown to leave the grid for the track.

The cars will be led by a pace car for one lap then leave the track just before start finish. At this point the 1st qualifier has control of the pace to the green flag. Once the green flag flies, the race is on but in our case it didn’t fly. The starter deemed the field wasn’t bunched up properly and decided not to wave the green flag. According to SCCA rules the race has started when the cars cross the start/finish line and the 1st lap is under caution and no passing is enforced. If you get caught passing under yellow a penalty of three positions is accessed shortly after the race.

The cars slowly went around for the 1st lap coming back to the start/finish line to take the green flag this time. As the cars raced for turn 1, you lose sight of the team cars and when they turn into 1, it’s so quick you think you saw them but not sure. Indy is a modern track and has large screens showing the internet feed of the race. On the front straight the screens helped us keep track of what went on over the 90 percent of the track we can’t see while in the pits. Both cars made it through turn 1 unscathed. Now time is spent watching the screens and providing info to the driver on his position and what cars are around him. We only communicate on the front straight unless there’s something Kevin needs to know before he reaches the front straight or something we find out from the screens. Most of the time the radio is quite.

The war of attrition started early when the 3rd qualifier went out, then the 1st qualifier, later on the 2nd place qualifier, our good friend Rick Kavitsky, went out. This not only helped Kevin move up but also our team mate Chris Dryden. From about a third of the way into the race Chris started to move up on his own. His smooth driving style and patience paid off for him when he passed the 2nd place car and started to gain on the 1st place car. Chris worked really hard to maintain his position. He was hounded by a past National Champion for the last four laps. Chris finished 2nd, a tremendous accomplishment for him. A week before the Run-offs he had problems with his engine and almost gave up on attending. He has perseverance for which he was well rewarded with a podium finish and all the fanfare that goes with it. Chris is on the left in the picture below. 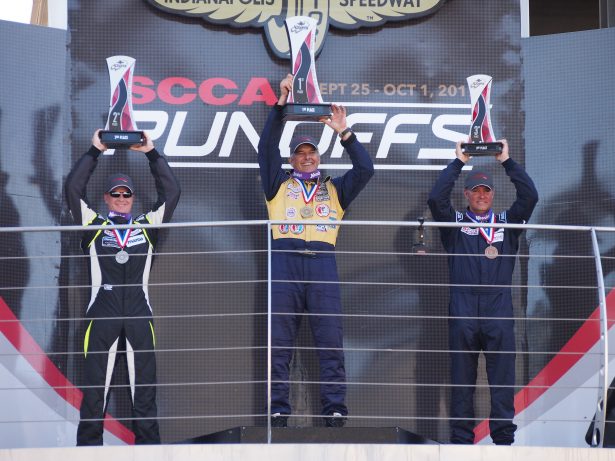 Kevin’s tires went away about four laps from the finish, which means they lost grip. I could see it in his lap times. Racing tires get “sticky” when they’re hot and when they lose that, it makes the car feel like it’s on a wet track. Another thing you can’t account for is close racing and sometimes you go home with some reminders of your race as shown below with the wheel circles from a competitor. In fact, the driver that bounced off of Kevin’s car stopped by our paddock to apologize for the contact. SCCA racers are upstanding people.

Kevin initially finished 10th but was later moved up to 9th because a driver in front of him was penalized for passing under yellow. He was also stopped in the pits to be interviewed by the SOC’s on what happened on track. This is something the SCCA has always done to insure they get the truth on what happened on track and make informed judgments.

By far this was the best Run-offs I’ve had the privilege to attend. I’ve deepened my friendship with the team, and we’re already talking about what improvements we’ll do to the race cars over the winter in preparation for another SCCA Run-off.