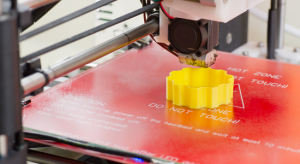 The holidays are upon us and it is time to not only think about family, food and gifts, but to also think about what the coming year will have in store for us. Not only for ourselves, but what does 2015 have in store for the manufacturing industry? Some of my 2015 “predictions” are based on market trends, some based on rumor and innuendo and some based on good, old-fashioned hopes – after all, I still like to think world peace is achievable! For now, these are the trends I believe will continue to evolve and dominate in the next 12 to 18 months.

3D Printing
You can hardly read any blog, or even watch a television show now, where 3D printing isn’t discussed. Heck, 3D printing was even used as a murder weapon on Elementary! In the manufacturing industry, this remarkable technology can cut prototyping down to a mere fraction of before, saving both cost and time. It can also produce viable, usable products!

I was fascinated to read about the first, fully functional 3D printed car. Not since the magic of the fax machine (and before that, the microwave) have I been so astounded by a technological advancement. It is clear that I am not the only one. At the upcoming NPE2015 show, an entire pavilion area will be designated to this very subject. Speaking of that fully 3D printed car, rumor has it that it will be duplicated at NPE2015. Starting on Day 1, the printing process will begin and on the last day, the car will drive out of the convention center. If this is true, it will be very cool to watch (See, I told you some predictions were based on rumor!).

In-Person Events
With the onset of social media (such Facebook and Twitter), Internet connectivity, travel restraints and more, in-person events could have been considered an interaction mode that was fast becoming archaic. Even in our personal lives, we tend to communicate face-to-face less and less. In fact, I still stick by a paper I read in college about how the advent of the automatic garage door led to people becoming less personable … but I digress.

Yes, technology and social media have helped us stay connected with great ease, but as purse strings are starting to loosen and the economy starts bouncing back, in-person events are growing again. We just concluded our IQMS User Group 2014 conference and by far, the most appreciated aspect was getting to meet and discuss issues, in person, with some of the other 500 attendees. From conferences to forums to large tradeshows, people are realizing, again, that networking with someone standing physically in front of you is far more beneficial than a simple phone call, email or video chat.

Social Media and Manufacturing
OK, I just knocked social media a bit in the previous paragraph but in reality, it isn’t a fad that is going away. The manufacturing industry can and should embrace the opportunities that social media has to offer. It is a fantastic way to get your message out quickly and communicate with individuals or companies with whom you have much in common. Social media can help boost a brand, preview a product or even create a groundswell of public publicity that turns potential marketing tragedies into hysterical company wins – just look at Chevy…and stuff!

Focus on Reduce, Reuse, Recycle
We learned the mantra “Reduce, Reuse, Recycle” years ago and it has become so ingrained in us as a nation that many kids today would never dare throw an aluminum can in a regular trash can. Kudos to us! But we can and should do more. I was recently at a conference centered on plastics and the speaker showed that video from the early 70s of the American Indian crying due to litter (Am I dating myself here to say I remember this video?). Interestingly enough, the speaker highlighted how paper was the main source of litter in that video and, the thought then was, if we could just move to plastic, our lives would be eminently better and no litter would ever exist. Cut to 40 years later and paper is now loved and plastics is, well, I will say it, evil.

Or is it? Don’t let the bag bans fool you! The emphasis moving forward in 2015 will focus on ways to continue to recycle and find viable alternatives to achieve a Zero Net Waste environment through education, knowledge and programs such as Operation Clean Sweep. Perhaps what is most intriguing, and in my opinion something to geek out about, is taking an existing waste product, like carbon emissions, and turning it into a usable product. Think that is impossible? It isn’t and the manufacturing company in the link is doing it right now, with great success. Imagine the ramifications of their “air plastic!” Why are we not talking about this more?! I believe in 2015 we will be.

As we move into 2015, I am sure there are many other trends that will take hold and shape our future. What are some trends you see for the manufacturing industry and what do you think we will be talking about this time next year?

Glenn Nowak, IQMS Vice President of Sales, has more than 25 years of experience in software and business management. His broad background and problem solving skills have increased IQMS’ annual profits by double digits every year. Prior to joining IQMS, Glenn worked in consulting for various companies including Weston Solutions and Ogden Consulting working on a wide range of projects including operations and business management.