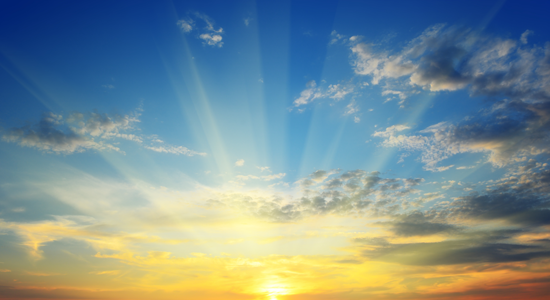 In the world of manufacturing where mission-critical enterprise applications such as Enterprise Resource Planning (ERP) and Manufacturing Execution Systems (MES) are used to run factories, companies have historically been hesitant to embrace cloud based software.

Recently, IQMS CEO and president Gary Nemmers and his leadership team were a bit surprised when over 65 percent of its customer advisory board told these leaders that they plan on or are seriously considering moving to the cloud including even their core manufacturing applications.

This number is much larger than anticipated with stated reasons including that the customers want to get out of running IT infrastructure so they can focus more on running their manufacturing operations and improving financial results.

What is Cloud Based Software?

The term cloud based software is a metaphor for computing over the Internet. Typically, a centrally located computer or servers share applications or software among many users via the Internet.

Traditionally, software was ran from hardware or devices on company premises. But with cloud based software, all computing is done from a remote location.

Cloud vs. On Premise Software

Many have said it is too risky to run their operations over the internet instead of having software and data housed in their own data centers. If there is a loss of internet connectivity, production can be shut down.

With the evolution of better high speed Internet technology like fiber optic cable and redundant connections, the risk of losing Internet connectivity has been reduced dramatically in recent years.

So after two and one half decades of offering its manufacturing operations applications entirely as an on-premises, licensed model, IQMS now offers customers three ERP deployment models.

For context, here are high-level definitions of the major deployment options:

At a level of detail below these high-level definitions, there are many more differences that fully define a deployment model: 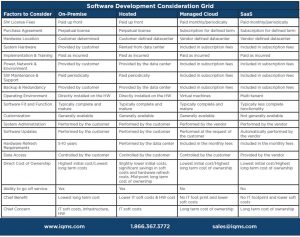 Some solution providers pursue a “lift and shift” strategy simply transferring the on-premises software to a commodity cloud infrastructure.

IQMS leaders want to provide cloud customers capabilities that they did not have previously. This is the reason that the company is partnering with Oracle to offer Oracle’s Business Intelligence Cloud Service right along with IQMS applications.

This will enable customers to analyze and visualize the production performance data collected by IQMS on the factory floor to make the Internet of Things (IoT) a practical reality for manufacturers of all sizes.

Since all IQMS applications run on Oracle Database, the company is also now offering all customers Oracle’s cloud backup service which has generated strong interest due to its reliability, strong security and price point.

A new generation of leaders in closely held private manufacturing businesses as well as innovative startups are choosing to move to the cloud.

In the case of companies like startup Elio Motors who makes a three-wheel, high-mileage vehicle with a modest base price, the move to the cloud was a simple decision. They didn’t give on-premises IT any serious consideration. So, they became the first IQMS customer to be moved to Oracle Cloud Platform.

These kinds of companies have decided that the cloud ERP gives them the opportunity to derive more value from their shop floor data, pursue lean manufacturing, and redirect scarce resources from classic IT roles to other uses to boost productivity.

CEO Nemmers explains “The real value [in offering a cloud ERP from IQMS] is everything we build around it, including security and encryption, BI and analytics, and the backup and recovery components of Oracle”.

While many customers cannot or will not soon move to the cloud for various reasons, from my viewpoint gained from years of work in manufacturing plants and decades in enterprise software application.

This is not just a move from one server location to another. It is the smart structuring of a safe and secure platform choice to house manufacturing operating systems for the long term.

To learn more about how IQMS provides strong choices to fit the needs and interests of manufacturers everywhere, download our whitepaper, ERP Deployment: Choice is the New Cloud

Ed Potoczak, IQMS Director of Industry Relations, has more than 30 years of experience in the manufacturing industry. Formerly an ERP consultant at the Oakstone Group and Plante Moran, Ed has also held positions as a senior systems engineer for Chrysler, technical sales leader in parts suppliers and general manager for a process equipment builder.