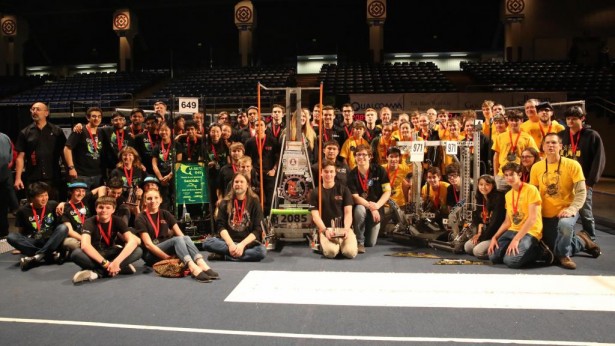 Here is their story:

Things are in motion for our trip to St. Louis.  As promised, here is a little more detail about what is going on and some more highlights of the Silicon Valley Regional competition.  We’ve been busy getting a robot shipped and gear packed as well as making travel arrangements.  We have 17 students and 11 mentors and parents attending.  Fortunately people have stepped up and helped make it all possible since making travel arrangements at this late date is difficult.

The pits at SVR 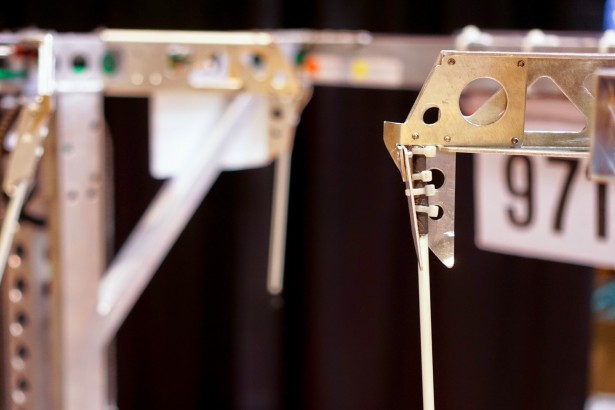 Our new guides on the end of the flippers.

We also had trouble picking up the recycle cans at the Sacramento Regional competition when they were sideways on the ground and changes were made in the pickup procedure to make that work better.

Our pit was a busy place at the Silicon Valley Regional competition.  There were a lot of people stopping by to see our robot. 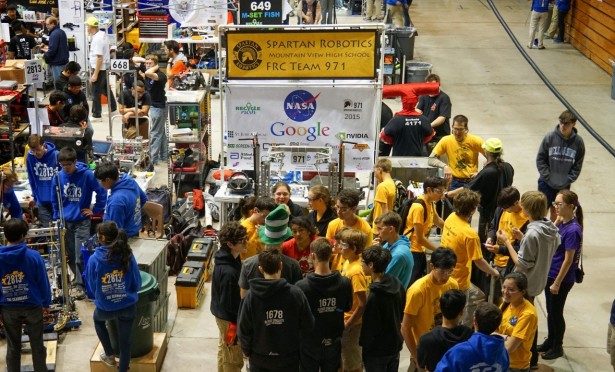 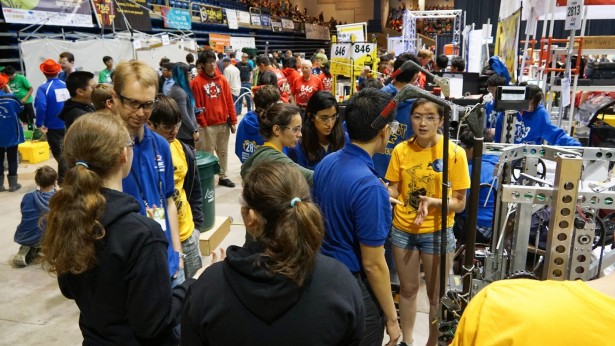 There was also a lot of interest by the competition judges.  Apparently the team made a good impression because we received the Excellence in Engineering Award for our impressive robot design and control software.  Many people told us that they really liked how our robot scores the stacks of totes.  The robot moves the stack straight out and smoothly, gently and quickly places them on the scoring platform.  It appears that the judges agreed. 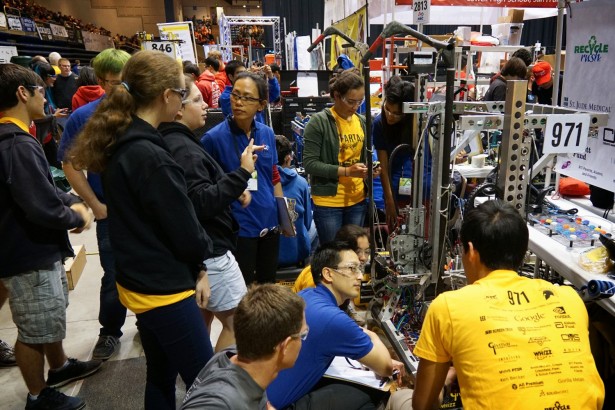 Judges visiting – they are in the blue shirts 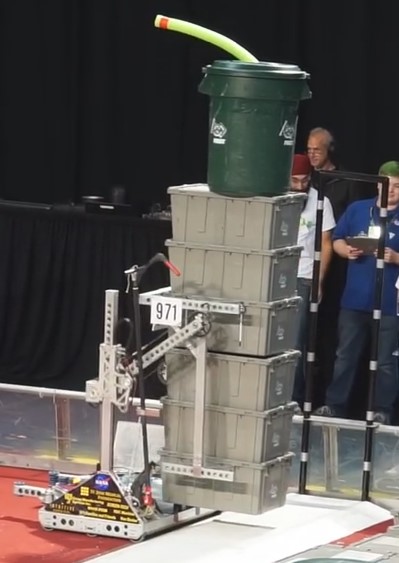 Placing a stack on the platform 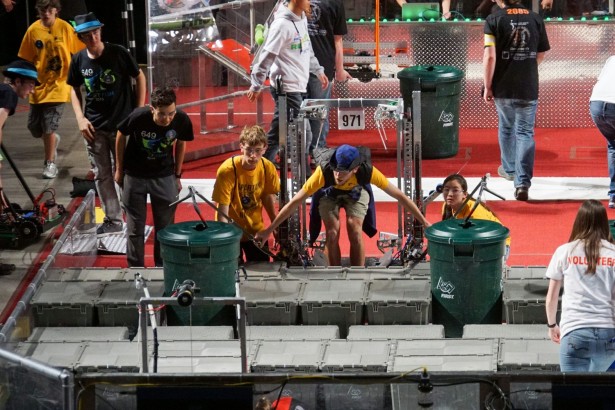 We had problems in our first two matches but then we started to perform much better.  The can grabbers were lightning fast but had to be aligned properly at the beginning of each match or they would miss the cans. 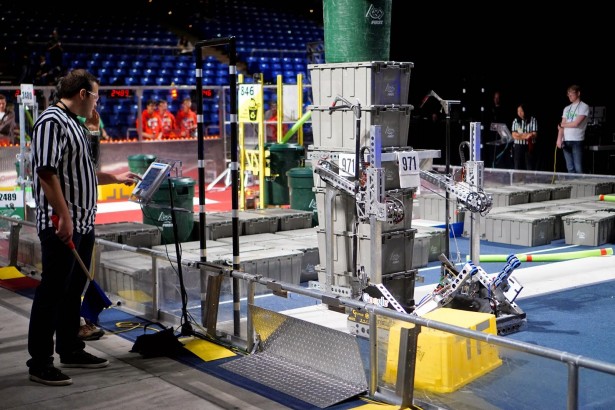 Positioning the can grabbers

The actions of the robot was complex and needed a lot of coordination by the driver and the arm manipulator who had a bunch of buttons to keep track of in order to pick up totes and cans and then place them on the step.

Placing a stack on the platform 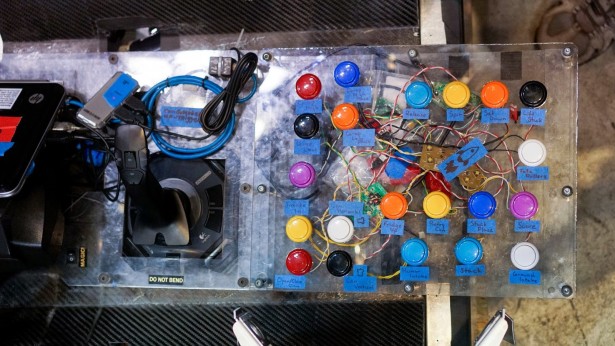 Each of the buttons performed a different pre programmed task.

The human player loading the totes into the robot also had a big job.  The difference between scoring an additional stack of totes and not was often just seconds that were lost at each part of the process.  The interaction between driver, manipulator, and human player had to be very smooth.  Practice between the Sacramento Regional and SVR helped with this. 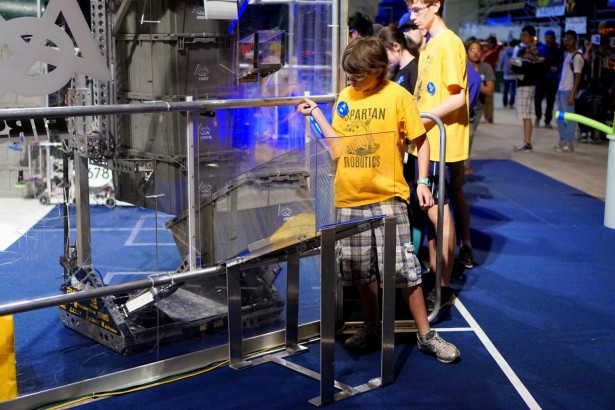 The human player loading totes and opening the shoot.

Sometimes things just didn’t go they way they were supposed to so as always, it was back to the pit to watch videos and figure out how to do better.

In case you would like to see the robot in action, here is a video of one of our quarterfinal matches.  We are on the red alliance (far side of the field) at the left side of the video.  We grabbed the two recycle cans during autonomous and had some trouble shaking them loose because of some modifications made on the grabber at the competition.  Once free of the cans, we went on to place two full stacks on the scoring platform.

Work has continued on the robot in preparation for the Championship Event in St. Louis.  The drive team has also been practicing to get ready.  The division lists are out and we will be in the Carver division.  If you want, you can follow our progress during the competition on the FIRST Championship site.  We will be leaving this coming Tuesday for St. Louis and again, thanks for all your support.

The SOLIDWORKS EDU team is going to FIRST Championship 2015.   We want to visit you so message us your division @SOLIDWORKSEdu.  Marie

Director of Education & Early Engagement, SolidWorks at Dassault Systemes SolidWorks Corporation
Marie Planchard is an education and engineering advocate. As Senior Director of Education & Early Engagement, SOLIDWORKS, she is responsible for global development of content and social outreach for the 3DEXPERIENCE Works products across all levels of learning including educational institutions, Fab Labs, and entrepreneurship.