In 2021, The SLUGME Committee had a wild idea to hold a 24-hour event and deliver technical presentations from around the globe. This seemed like an insurmountable task, and it was very far outside everyone’s comfort zone. With the help of many people, in August of 2021, we pulled off an epic event known as SLUGME6. You can watch a highlight video of that event here. SLUGME6 was watched by over 3,000 people and 41 countries and the broadcast continued for 25+ hours. These were mind-blowing numbers and we could not have asked for better results. 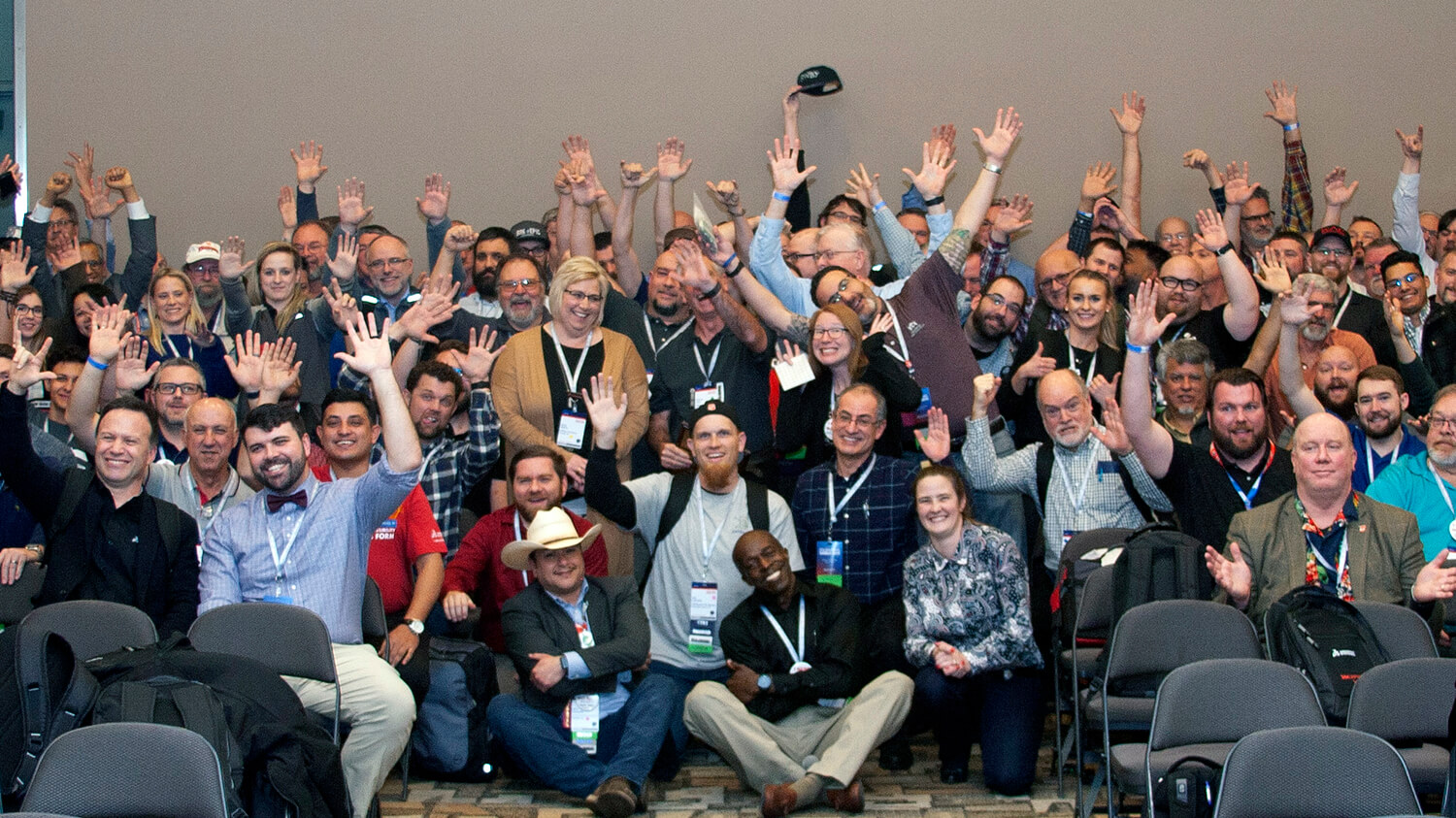 Fast forward to 2022, we began to formulate the plan for SLUGME7. The bar was certainly set very high, and our expectations were even higher. While the 24-hour event was epic, we wanted to start by targeting a 6-8-hour broadcast for SLUGME7, taking place on September 10th. This would allow us to focus our attention and deliver more compelling content in a shorter period of time.

So, where would we get six hours of content? One of the most successful aspects of SLUGME 6 was the Magic Wheelchair Build completed by Johnny Harrison and Kirby Downey in the UK. You can see that video below. The response and engagement with this build from SLUGME 6 inspired the master plan for SLUGME 7.

We decided to reach out to the SOLIDWORKS community and find several projects that we would partner with for SLUGME 7. We were hoping to find and support seven projects over the course of about four months (April through July). The plan was to heavily document each one, and during the month of August, develop recap videos or mini-documentaries. We could then roll those clips on September 10th and recap each project over the course of our six-hour broadcast. Since there happens to be seven continents, we were also hoping to support one project every continent. How did we do? You will have to watch the broadcast to get the entire picture, but let’s try to recap as much as we can.

So how did we do? Let’s take a look at our projects

In Africa, we are fortunate to have Ahmed Abdelnasser as our SWUGN Committee representative. He helps us support existing groups and find new leaders in all parts of Africa and surrounding countries. Naturally, we asked Ahmed what was happening in Africa this year and how can SLUGME help. We began to talk about all the amazing students who were entering into our fantastic design competitions, ARM4All project and The Project of the Year. Ahmed introduced us to Ahmed Al-gazar and Mahmoud Labib, 2 students in his region that were participating in these projects. We also learned about a few other SWUGN community members outside of Africa who were entering these projects, Nikhil Naikade & Nadir Oktay. We had a chance to chat with all these students and Valier LeColle (Marketing Director – SOLIDWORKS EDU). We talked about the importance of participating in projects like these as a student. You can re-watch this segment here.

Within Asia, we have seen the fastest growth of SWUGN in India over the past few years. So we decided to reach out to all the SOLIDWORKS User Group Leaders in India and ask how SLUGME make a difference. Their response was unanimous. They all said that we should support SOLIDWORKS certifications by holding an event where the certifications are free and we provide the hardware and software. With these feedback in mind, we scheduled two certification days at Dassault Systemes’ offices in Pune and Bangalore and welcomed in any SOLIDWORKS users who wanted to take a predefined list of available certifications. We also created a virtual option by sending certification access to anyone who completed the 3D Creator or 3D Sculptor Training modules within the month of July. We received support from these amazing User Group Leaders; Nikhil Naikade, Amrit Lal, Puneet Sikka, & Prasad Adiga. We also had support from a few colleagues in India, such as Divakar GM and Pradeep Niduram. You can watch this segment here.

As previously mentioned, the Magic Wheelchair build from SLUGME6 truly inspired our plan for SLUGME7. Working with Kirby and Johnny once again, we were excited to watch as they completed another Magic Wheelchair for a child in the UK. They were paired with Preston and they learned shortly after meeting with him that he was scheduled for surgery in September, and he may end up with a new wheelchair, which would put their project on hold. Kirby and Johnny decided to pivot into building an interface device that would help young Preston interact with his family. To understand the full impact of this build and to see just how happy Preston was, you need to go back and watch this segment. Words cannot describe the joy that Kirby and Johnny brought to Preston and his family. They are hoping to complete the entire Magic Wheelchair build in the future when Preston is ready. Watch this segment here.

Jose Saldana is our Western US representative for the SWUGN Committee, and he also helps us in any Spanish-speaking regions. In Peru, we recently on-boarded Juan F. Chirinos Mego as leader of Perú SWUG. Jose and Juan discussed a few possible projects that we could support and we settled on a non-profit called Peruvian Hearts, an organization that encourages social, economic, and political change in Peru. They are working to end poverty and gender inequality through educating young women and empowering them to become community leaders. They introduced us to Aldeyny Gonzalez, a young woman who is studying to become a systems engineer. Jose went to Peru to personally meet Aldeyny and her family. He was also able to lead a STEM workshop focusing on SOLIDWORKS and robotics with young children in Peru. This was truly an epic trip and you can watch this incredible segment here.

Through our relationship with Magic Wheelchair, we were introduced to a young woman named Jenica. She is a third-year electrical engineering student at Purdue University and she is confined to a wheelchair with limited mobility. She is a brilliant and passionate designer and has some experience with SOLIDWORKS. We brought in some of the best and brightest here at SOLIDWORKS and asked them to design the ultimate workstation for Jenica to use SOLIDWORKS and other design tools. Jenica participated in the decision-making and drove a lot of the design elements. She is a big fan of the TV Show “Dr. Who,” so many of the elements were modeled after some of the aspects that you might see in the show. Through the course of our 6+ hour broadcast, we checked in with this team to see how the design was going. Jason Pohl took us through the initial concept design, done in SOLIDWORKS Connected. Jordan Tadic created the frame for the workstation in xShape. Andy Barnes crafted some out-of-this-world geometry in xGenerative Design. Shreyaz Vaidya completed the design with some much needed validation. This was a very inspiring design and we could not have done it without Jenica’s help. We are hoping to have this workstation (or something similar) physically built and delivered to her in the future. 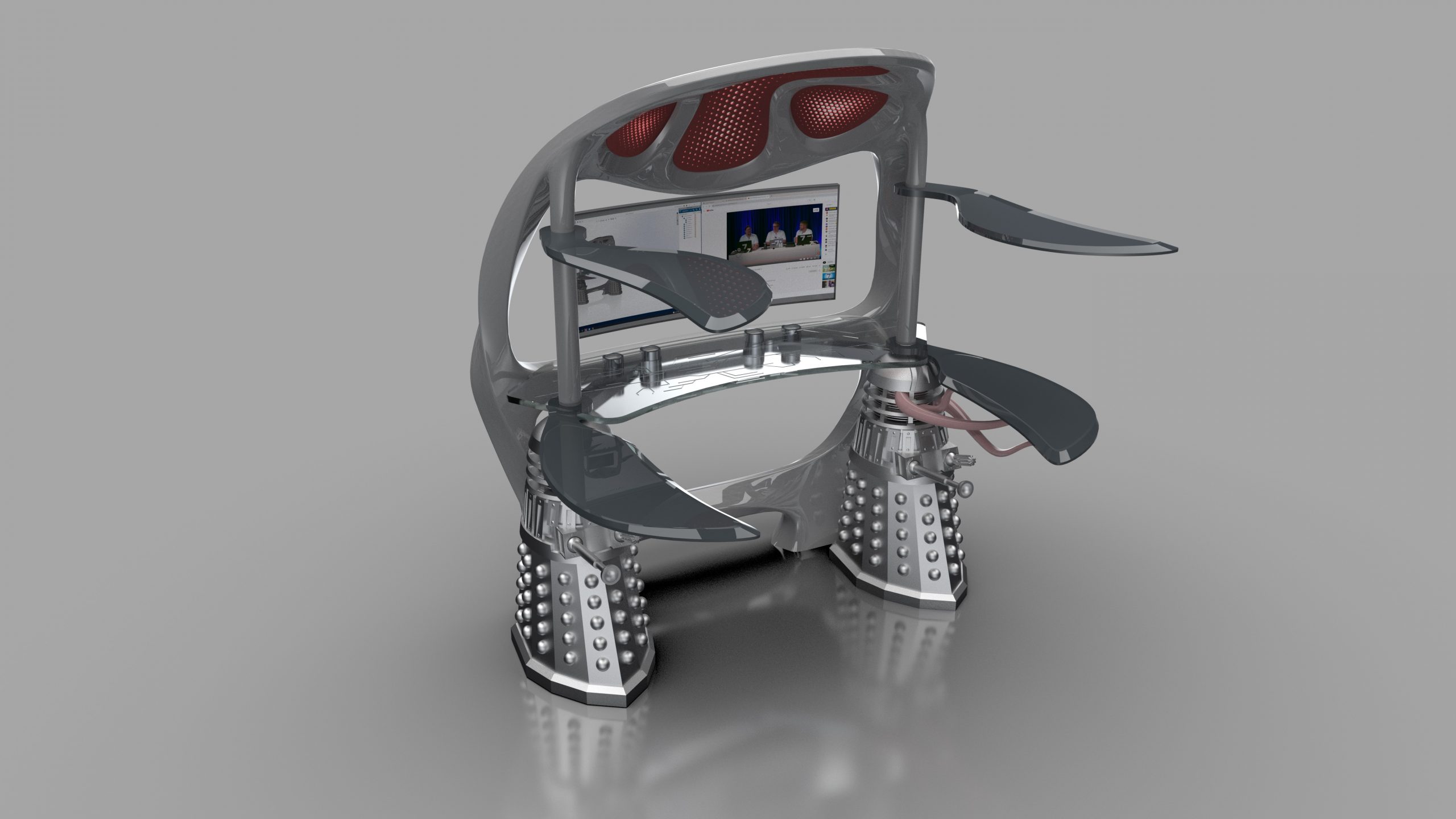 The final continents were tough to fulfill. For Australia we were not able to find a project to support, but we are already talking about some possibilities for SLUGME 8.

For Antarctica, when we started discussing SLUGME 7, it was a constant running joke about how difficult it was going to be to find something to support. Todd Blacksher did a lot of searching. He started with National Geographic, where he found out about Amy Leventer, a research scientist, and a Professor from Colgate University. After a handful of emails, Amy suggested that Todd reach out to David Harwood, a research scientist, and a Professor from the University of Nebraska in Lincoln, which happens to be Todd’s home town. Too good to be true! David was on the research team with Amy, and lives only a couple of miles away from Todd. They met at a local brewery and talked a LOT about Antarctica. The film “The Lake at the Bottom of the World” documents the research that they did in Antarctica. Subglacial Antarctic Lakes Scientific Access (SALSA) is the organization that handles the research that was documented in the film. Todd’s original goal was to get several people working together to 3D print a topographical map of Antarctica to show the locations of all the research stations, and possibly 3D print scale models of some of the futuristic research stations. You can google “Antarctica Research Stations” to see pictures of several of the different stations.

In the end, we just wanted to highlight David’s work while we had a captive audience, and we hope to find some other projects that we can support in the future.

As we have seen with the event in India, SOLIDWORKS Certifications were a huge part of SLUGME 7. Anyone that viewed SLUGME 7 on YouTube was invited to complete a survey and then gain access to nearly $700 in certification exams. More then 1,400 people completed the survey and received the exams for free. After the two-week testing period after SLUGME, the results are staggering. Nearly 1,000 newly earned Certifications are a direct result of this event. Thank you to everyone that participated and a big thanks to the SOLIDWORKS Certification Team for supporting us, once again.

Here is the breakdown by certification. 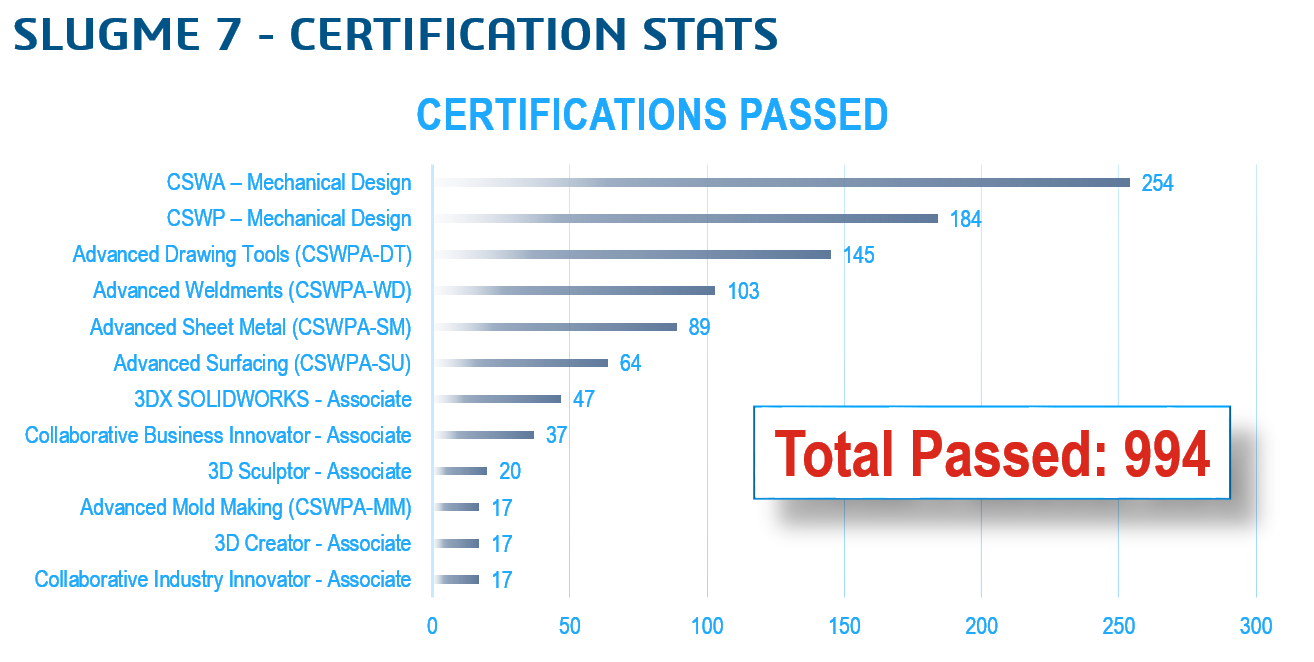 SLUGME 7 was viewed by more than 4,100 people in 52 countries. I think we truly made an impact and it’s awesome to see the SOLIDWORKS community come together to support projects like these. There are so many people to thank that it would take an entirely separate blog to do so. I want to personally Thank Todd Blacksher and Eric Beatty for taking me on the wild ride that SLUGME has become over the past couple years. I can’t wait to see where we go next.

To wrap up, here are a few more facts about SLUGME7. 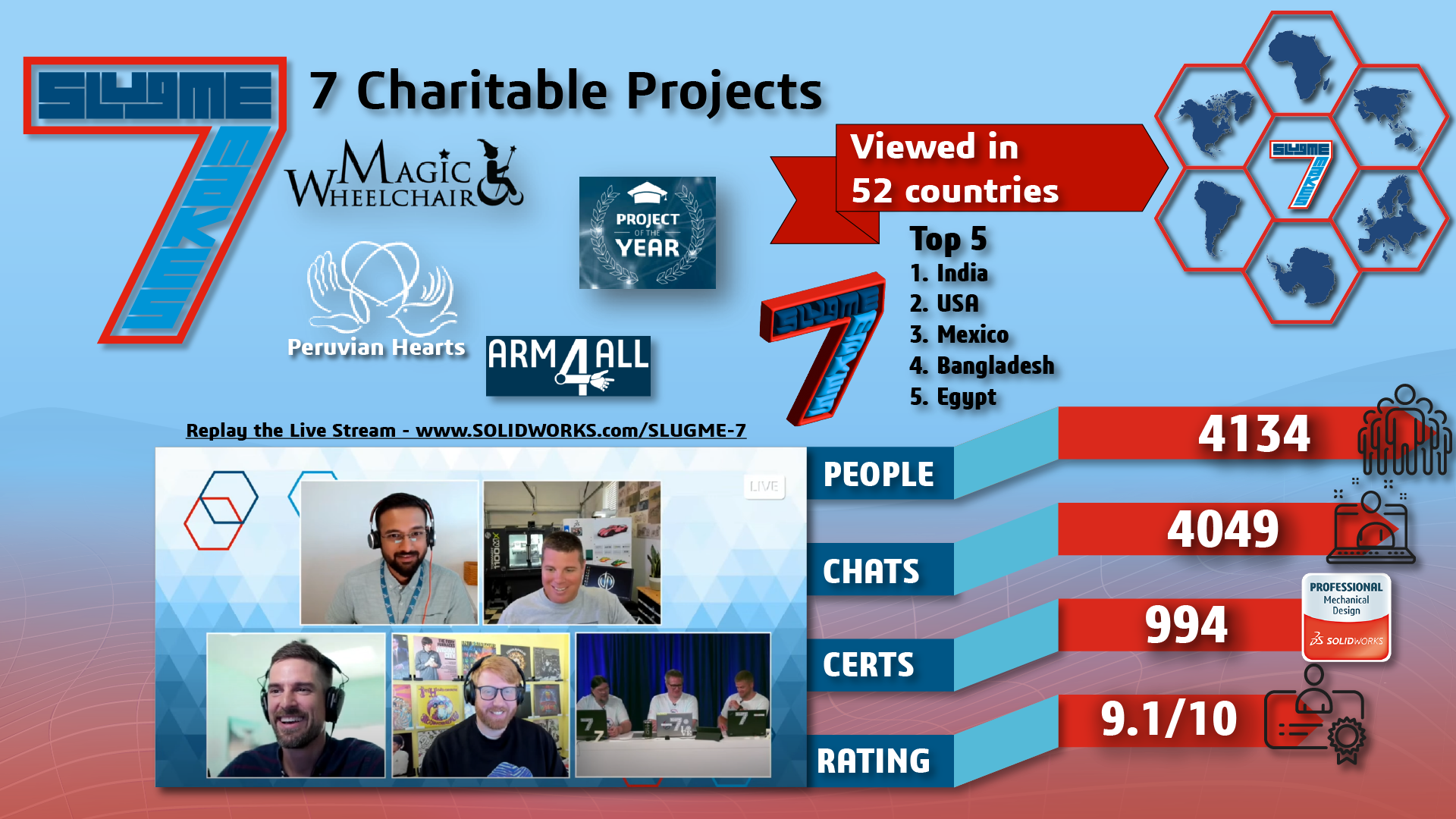