Note: this blog post was written by Eric Beatty, the leader of the Seattle Area SOLIDWORKS Power Users Group, and Senior Mechanical Designer at OMAX Corporation.

Early March, 2016. Todd Blacksher sits watching Alin Vargatu, one of THE preeminent presenters in the SOLIDWORKS user community, deliver his world-class “Large Assembly Tips” presentation. As one would expect, Alin drops knowledge bomb after knowledge bomb. Despite being a CSWE-level SOLIDWORKS user, Todd is never afraid to admit that he just learned something new, useful, and amazing. He turns to his side and eagerly asks, “Did you know that?”

But there was no one there to answer him. In his excitement, Todd has forgotten that he’s watching a webinar. Only a month earlier, he was in Dallas, TX for SOLIDWORKS World 2016, where such remarks, whispered to a fellow attendee seated next to you are extremely commonplace (as are the ultra-high caliber of presenters and sessions to attend).

As a user group leader, Todd is more than aware of the difficulty of securing dynamic speakers and engaging presentations on a consistent basis for quarterly or monthly user group meetings. Just the travel costs and logistics alone can be daunting to bring in a noted speaker to his area, if not outright prohibitive. But this doesn’t deter Todd. Instead, he comes up with a plan.

Todd’s idea was born that very moment. Webinars are already a commonplace event in 2016. User groups have been a part of the SOLIDWORKS universe since 1996. Why not combine the two. Arrange for a noted SOLIDWORKS speaker to deliver their presentation via webinar AND (instead of individuals tuning in) stream it to user group meetings all around the country, if not the world potentially. This was the idea behind the SOLIDWORKS Largest User Group Meeting Ever (SLUGME).

He immediately sent off an email, pitching the idea to SWUGN leadership. And he continued to pitch the idea, even though it was falling on mostly deaf ears. Nevertheless, he persisted. And at long last, Todd received (not quite) the answer that he needed:

Then he took it to the SOLIDWORKS Forums, where the idea really gained traction.

On December 7, 2016, almost 750 members of 33 SOLIDWORKS user groups in 19 different states and regions gathered together (physically AND virtually), ate 201 pizzas, and learned from Tom Cote’s “Large Assembly Techniques” presentation – which he delivered from the SOLIDWORKS corporate headquarters in Waltham, MA, with CEO Gian Paolo Bassi in attendance. 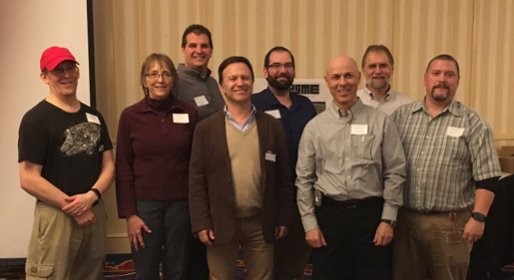 The event was a rousing success. So much so that planning for the 2nd SLUGME event got underway almost immediately. In November 2017, webcasting from Lincoln, NE, Todd Blacksher presented his acclaimed SOLIDWORKS World “All The Small Things” presentation. As for the event statistics, SLUGME 2, aka SLUGME 2017, set the bar even higher. The number of user groups, the number of attendees AND the number of pizzas consumed ALL doubled from the first event. 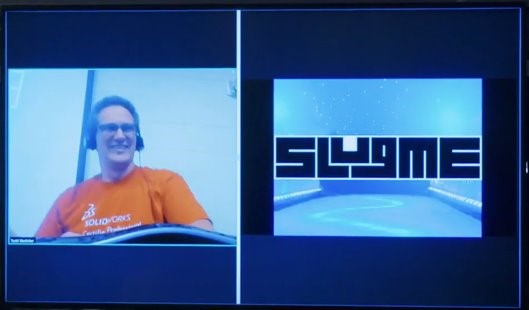 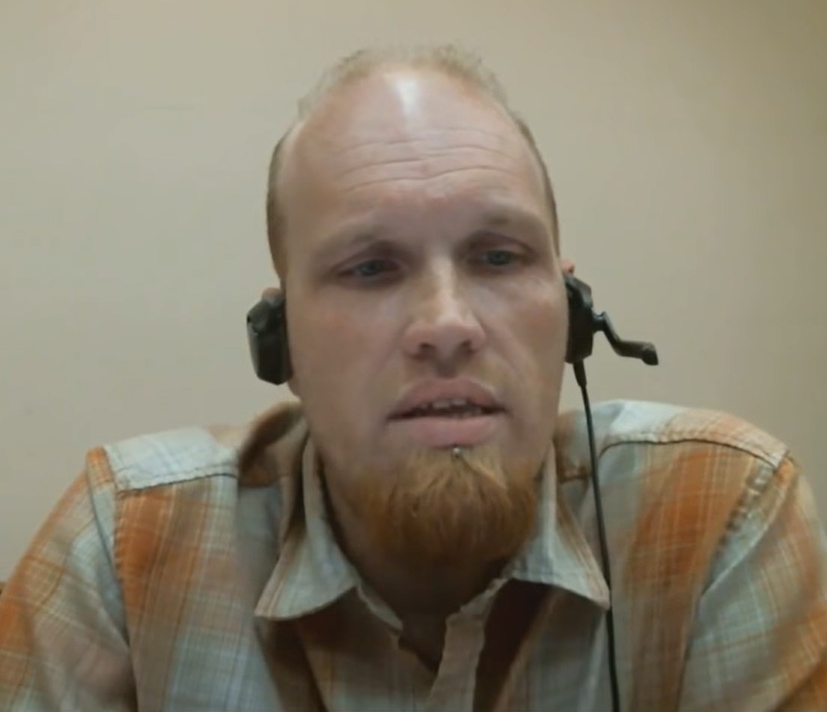 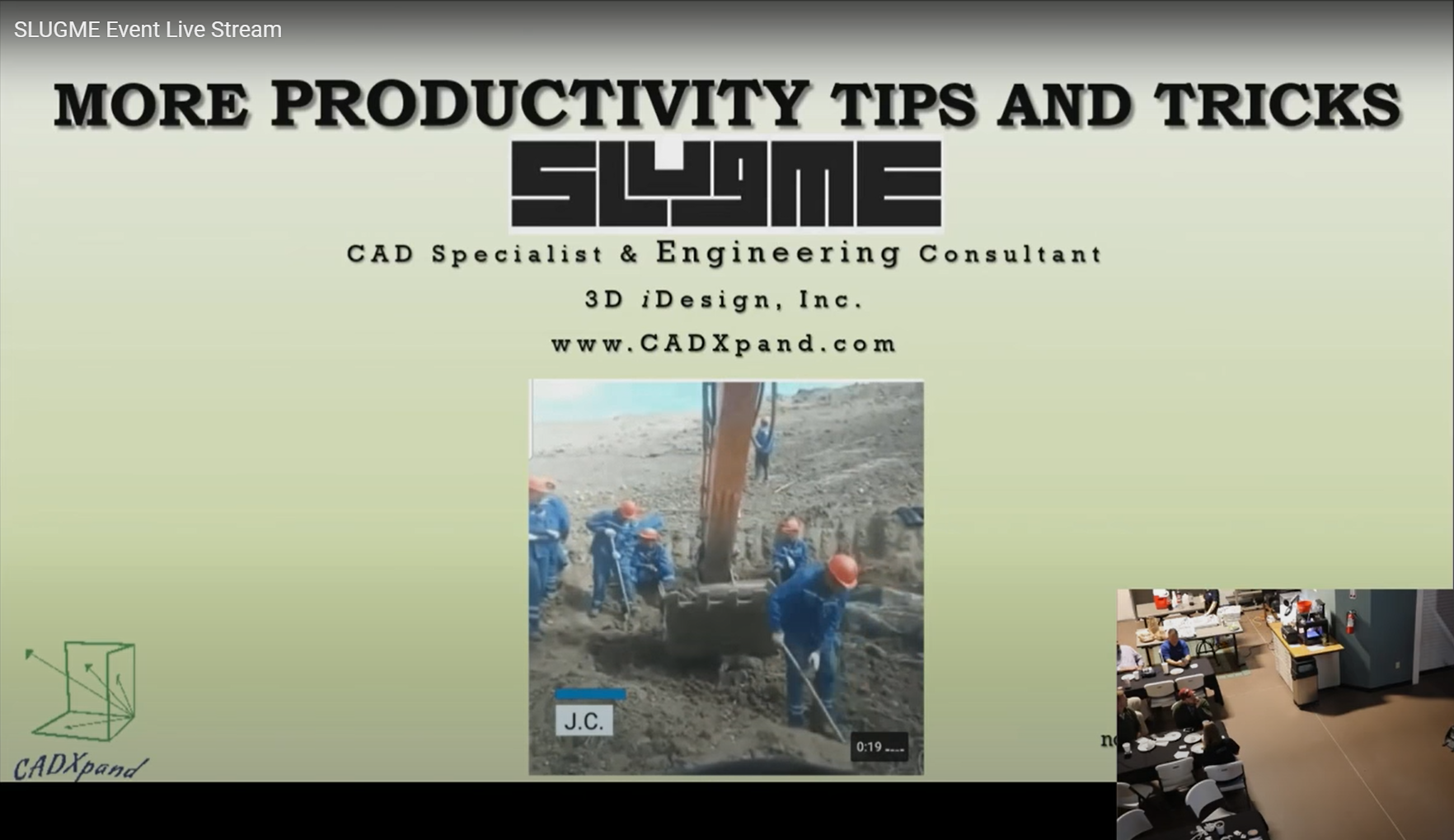 At this point, you’re probably seeing a trend. With each successive event, the hosting time zone changed. Time zones have always been a challenge to SLUGME organizers. Starting an event “after work” on the East Coast of the U.S. means that attendees on the West Coast have to interrupt their work day to participate. Similarly, a West Coast event starts way too late for Eastern groups. So, in 2019, Kam Smith and Eric Beatty joined the SLUGME organizing committee and they attempted to correct this imbalance.

Kam and Eric suggested that, instead of offering a single webcast presentation, there should be TWO of them. Both sessions would be streamed live for Eastern and Central time zones. In Mountain and Pacific USA time zones, the 2nd session could also be viewed live and the first session was recorded and made available for immediate playback. It was a logistical gamble but it paid off. Eric Beatty served as overall host/announcer while co-organizer Kam Smith kicked off the event with his popular “Maniacal Modeling Methods” presentation. Following Kam, Alin Vargatu (the original SLUGME inspiration) delivered his much-acclaimed “Multi-Bodies Save the Day” talk.

As we all know, 2020 changed the rules in SO many ways. SLUGME was no exception. SWUGN leadership made the decision, very early in the pandemic, that user groups should not be holding physical, in-person meetings. This was hard to accept at first. These types of meetings have been at the core of the SOLIDWORKS user group community since the very beginning. Even with their virtual meeting aspect, each of the first four SLUGME events had ALWAYS paired an in-person meeting with the webcast component.

At the same time, you might say that SLUGME had well-prepared the SWUGN community to pivot rapidly and successfully to an online meeting mode. And so, for SLUGME 5 (aka SLUGME 2020), we went entirely virtual for the first time. Kam and Eric switched roles. Eric served as the “opening act” presentation. He took a look at SOLIDWORKS Connected and the 3DEXPERIENCE Platform cloud apps, xDesign and xSheetmetal. Noted Industrial Designer and surface modeling expert Ed Eaton encored his well-received “Trees of Blood” feature manager troubleshooting tips and techniques. Additionally, SOLIDWORKS own Mark Schneider (of Model Mania fame) joined the team for a special edition of “Stump the Chumps.” The added content took the meeting length to nearly four hours! 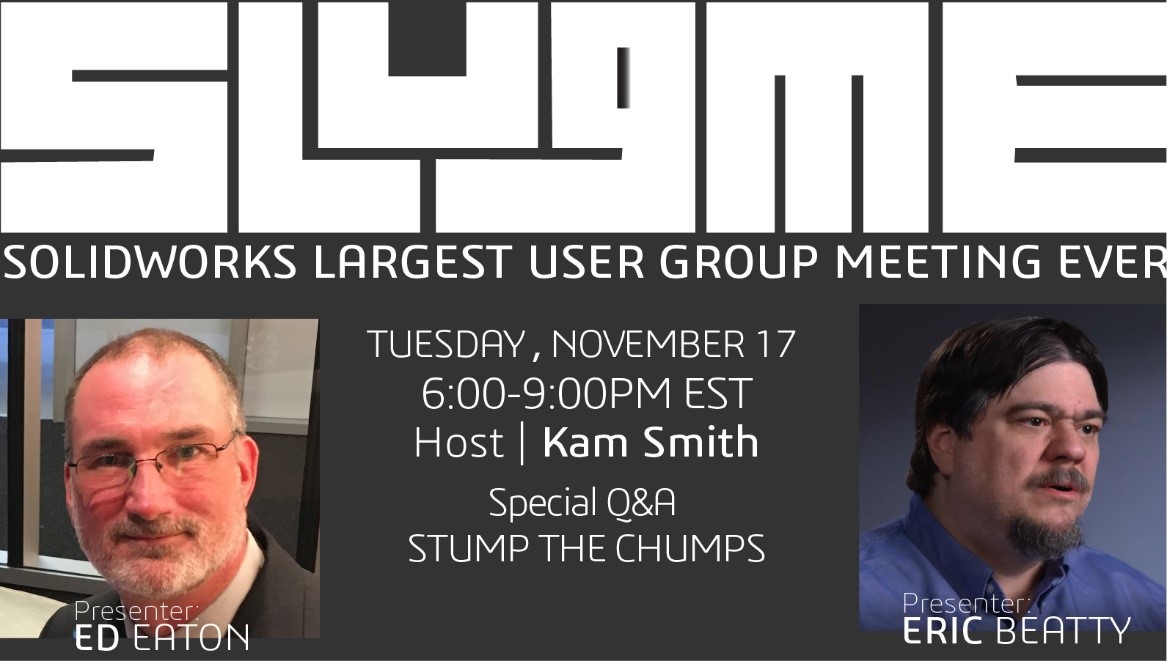 That almost four-hour run time inspired Joe N. Lance of the Houston, TX user group (HOUSWUG) to remark “I thought the ‘L’ in SLUGME meant Largest? Isn’t this the LONGEST user group meeting ever?” The SLUGME organizing committee immediately replied “Challenge Accepted!” and SLUGME 6 was born. The only logical next step was a 24-hour meeting, but we needed a theme. So, we figured – SOLIDWORKS is part of Dassault Systemes, which is is based in France. What else is based in France and 24 hours long? The 24 Hours of Le Mans auto race. Kam, Todd, and Eric were all fans of the movie “Ford Vs. Ferrari.” It all came together. They recruited a team of SOLIDWORKS experts to design a Le Mans Hypercar-series racer and pitched the idea to SOLIDWORKS management. The result will debut, starting at 5PM Paris, 11AM ET US, 8AM PT US and proceed, time zone by time zone, to deliver 26 hours of “pre-race,” event, and “post-race” presentations full of amazing SOLIDWORKS learning content at 6PM no matter where in the world you are.

Register for SLUGME 6 today, and watch live on the SOLIDWORKS YouTube channel on Saturday, August 21. Please join us!