If you want to practice building empathy, a good way might be to imagine being the car from one of your favorite movies. Seriously – think about it. Take a second to recall the vehicle from one an action movie you might’ve seen lately. Sure, it might have its glossy moment (say, in the film poster advertising its release), looking all nice and shiny. But, at some point during the film, it might very well:

Sometimes one of these things happens. Sometimes, all four happen. If you’re like me, this spurs many, many questions, such as:

Before long, you realize: it would be nice to actually talk to someone who knows how all of this works. And thankfully, that’s something I got to do on a call very recently with Dave Clark of Dave Clark Designs. Dave’s worked on vehicle concepts/builds for movie franchises like Mission Impossible, Terminator, and Ready Player One. Surely, I thought: he could answer some of our questions!

Q: So Dave, how did you get into design in the first place? What’s your story?

A: For as long as I can remember, I’ve been able to draw. And my father was always hands on around the house – building extensions, knocking holes through walls, etc. He was never shy about picking up a drill and making stuff!

My uncle was very artistic, and he showed me the fundamentals of drawing one day. Perspective, vanishing points, drawing a face, working with symmetry. I was always sketching cars and buildings, and once I could draw a car, that was it. I’d go to my dad’s workshop and carve the wood into the shape of cars. Then I’d take it to the next level, trying to make go karts. Then, I tried to carve gears out of wood – get some rack and pinion action going on. And I continued on from there. 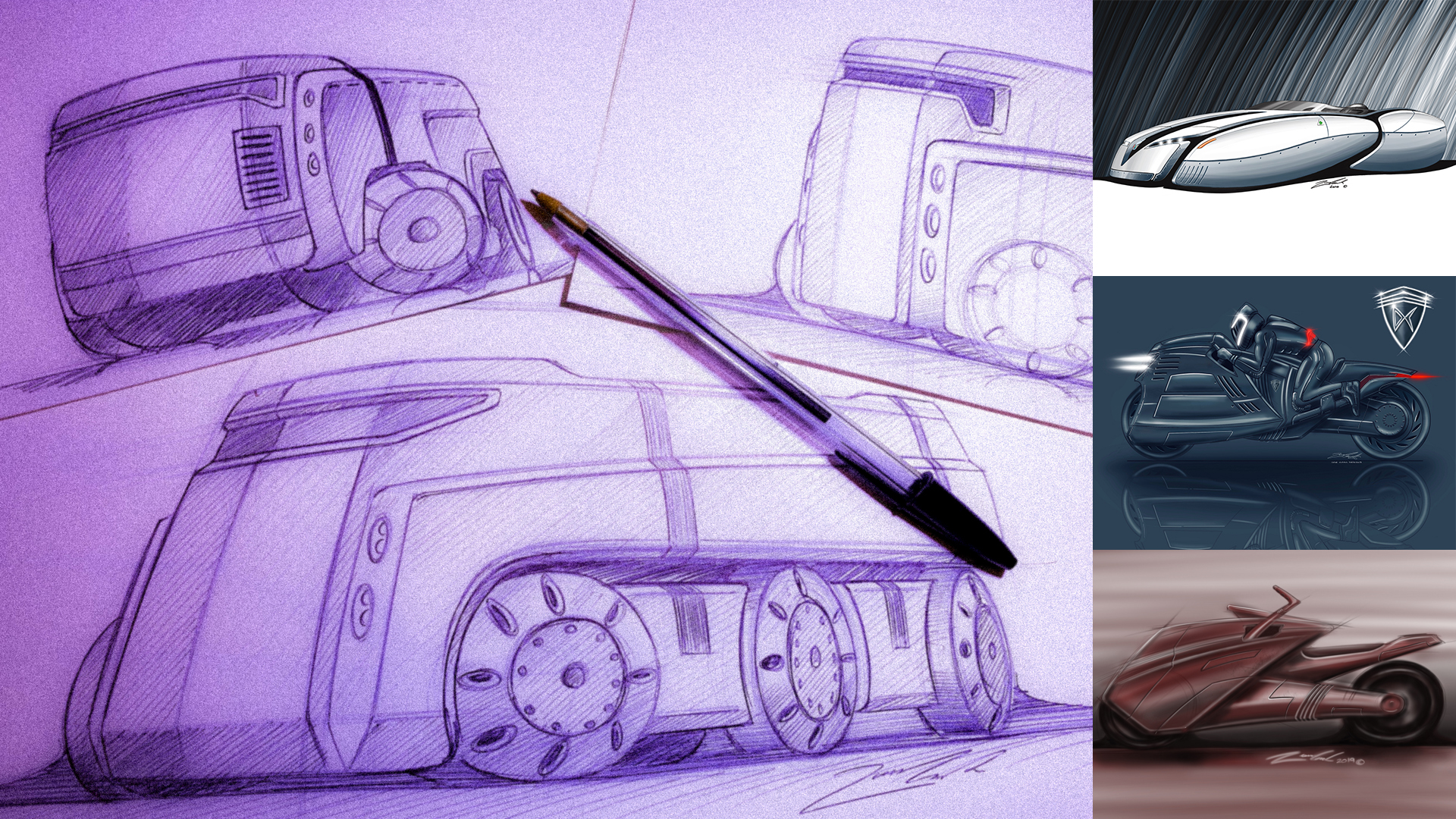 In school, I tended to struggle a bit. I found I was actually dyslexic, but things I was always good at as I grew up were metalwork, wood work, art, technology, and those sorts of things. Basically, things I could get hands on with.

Q: What about your early career? What kind of work did you wind up getting into when you were getting started?

A: I found a local company to work for in their lab. They made plastic moldings for the car industry. My dad encouraged me to get a job in their lab when I could because we knew they had a drawing office there. The idea was that since I wanted to get a job working in the drawing office, I might be able to get there easier if I started off in their laboratory. So, I did.

I didn’t want to be a tool maker; I wanted to be a designer. But I spent three years in the tool room, learning how to lathe, mill, and all that – and looking back, it was the most precious time I’ve ever spent. I can make what I design. And when I draw, it helps to know how things are going to be made.

Q: I totally get it. Design for manufacturing is still a huge topic, even with different, newer manufacturing methods becoming more prevalent today. What was next for you after that apprenticeship?

A: I started with a company looking for service engineers at the time. I was out on the road servicing printing equipment, but they were also looking for people who could design new installations as well. I was doing surveys on production lines, designing equipment, installing it. I found myself having to modify out standard equipment to fit unusual circumstances.

I also got to use my industrial design side since they wanted the newer products to stand out a bit more for exhibitions and so on. I spent 13 years with that company.

So, where did his desire to go freelance come from? How did Dave decide to make this big jump, ultimately?

After 13 years at the company described above, Dave “figured he’d done all he could do with that job.” Ultimately, he knew he wanted to be a freelance designer. The most logical path, prior to making the choice to give it a go full-time, seemed to be to work for as many different types of companies as he could to in order to see what he could do.

From there, Dave jumped over to the lighting industry, which is where he got a lot of exposure to 3D CAD. It was a bit of an adjustment from the drawing board he was accustomed to using. There was one feature that really got him hooked, however: Undo. He joked: “As soon as you discover the ‘Undo’ button, all’s forgiven.”

“There’d been a couple jobs that I wanted to go for that required SOLIDWORKS,” Dave remembers. “This company had just purchased SOLIDWORKS. I knew 3D was the way to go. With that, I learned SOLIDWORKS pretty well as I worked there in lighting over a three-year span.”

He made stops in a variety of other industries. Along the way: building retractable barriers for airports, making Maclaren baby buggies (making them, in his words, “light as a feather, and strong as an ox!”), and working at a design consultancy. 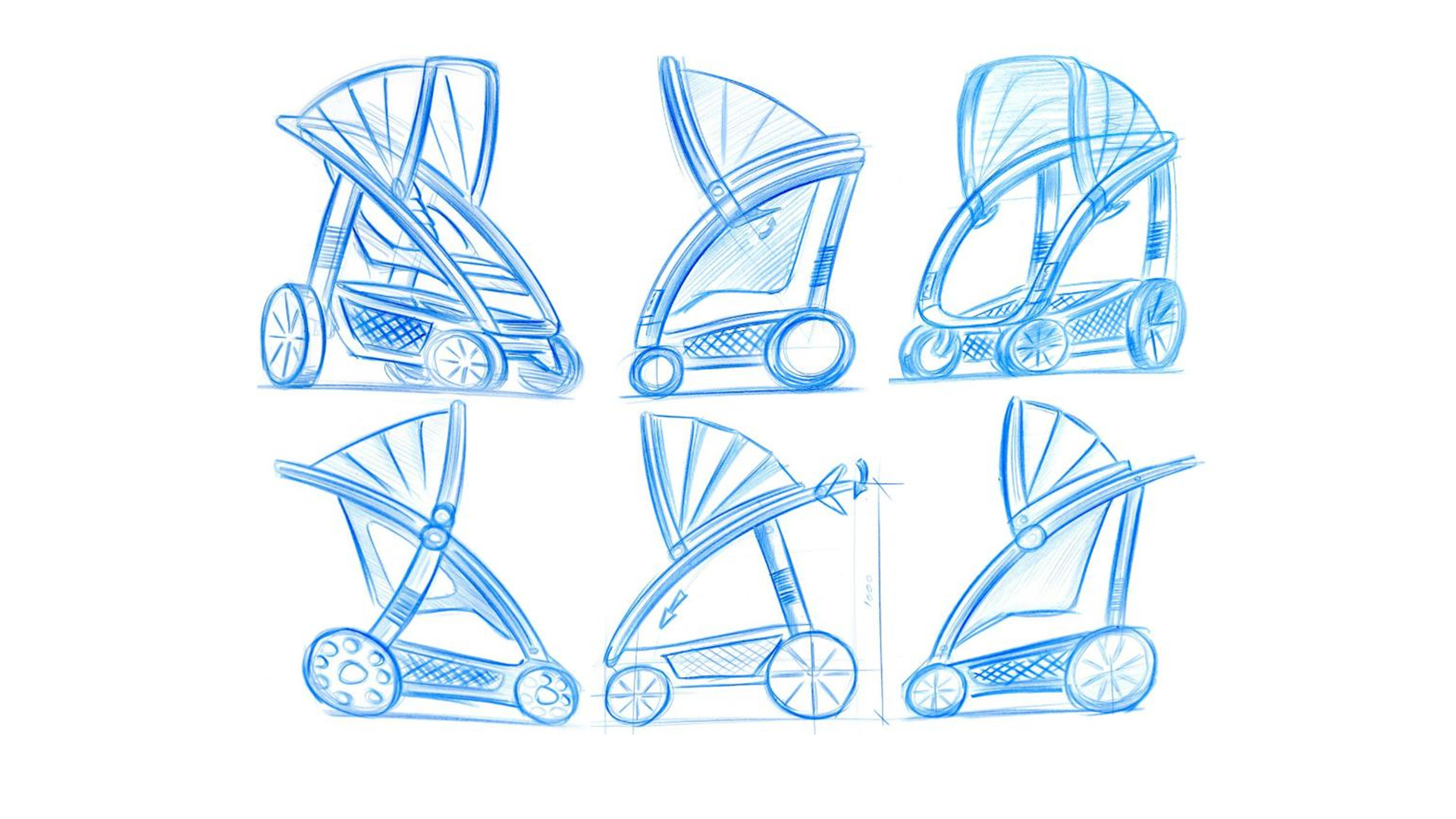 Eventually, he went at it alone. He got into freelance at first with a project he’d taken on from a friend of his. He knew he inevitably wanted to balance his freelance work (where he frequently did work for other companies using SOLIDWORKS), design his own furniture (tables, chairs, etc.), and his own vehicle sculptures – which is something he’s really gotten more into through today. It seemed to be a great meshing of his diverse ME/ID skillset.

“I really needed to design stuff that I liked,” Dave recalls.

Along the way, he “found a guy making replica Aston Martins” from ventures related to his sculpture work. He looked at Dave’s sculptures, and said, “I don’t want a sculpture, but are you any good at making full-sized cars?”

Dave did some work through this contact for a couple months, and got to know a certain vehicle mechanic over this time. A few years later, through these contacts, someone reached out to Dave and said “I have someone working with me here who’s recommended you as a designer. I work in the movie industry.”

From these connections through to today, Dave uses SOLIDWORKS 3D CAD and SOLIDWORKS Visualize to make not only the vehicle designs you see in movies, but the rough concepts and details you may or may not ever get to see. Visualize specifically comes in handy when conveying concepts to studio executives (instead of making several physical prototypes, which would be costly in terms of time, labor, and expense).

And with Dave’s industrial and mechanical backgrounds, he can not only make designs that look great, but designs that can assuredly be made practically using available manufacturing methods.

Q: I have to ask, Dave: what are some assumptions you had before getting into the film industry that have been dispelled during your work there?

A: I always assumed that if you saw one car in a movie, this was the one version of that car that was used. Really, it’s: if you build one, you build seven of the same thing. You have the ‘hero’ vehicle without a scratch, another one coming off the side of a building on a six-foot drop, one that rolls over, and one that explodes, for example. So, you’re building seven of everything – if not more.

I design them as if I’m spending my own money on them. On one film, the amount of people involved and length of filming is astronomical. A ten-minute chase scene can take four weeks to make. The level of detail we go to – we go down to really fine detail. For example, we’ll apply things like custom logos in a car that no one will ever see! 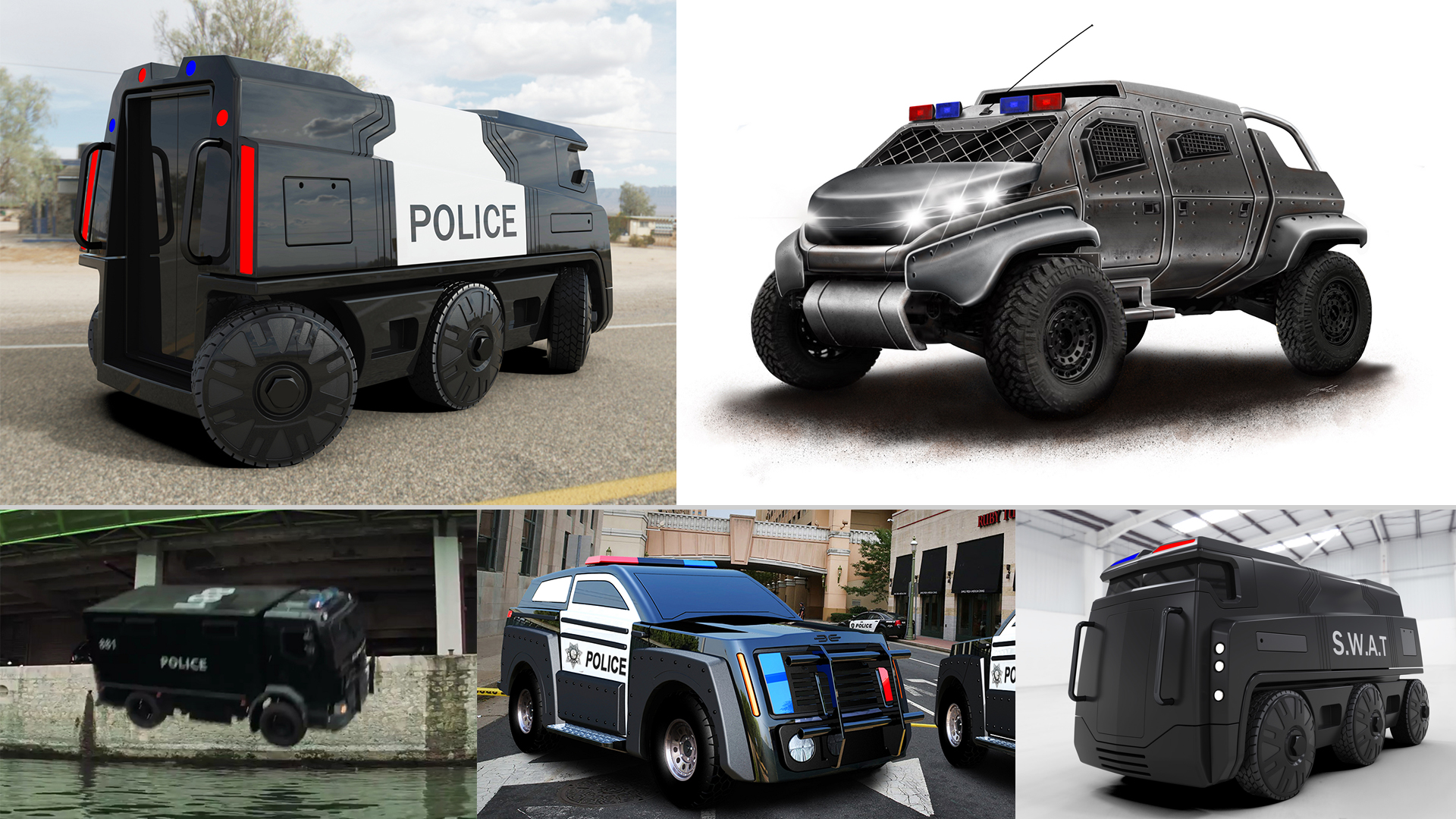 There’s moldings, fabrications, multiple materials, and ultimately, we have to engineer them – having all seven of these vehicles side by side. But this sort of work ticks every box for me. It’s sort of like the baby buggies I used to make. It has to look pretty, but the build of the cars and how they operate is quite complex.

Q: That’s an interesting parallel. What are some differences in usage consideration between the stunt cars you rapidly create for the film industry versus, for example, a daily driver someone would traditionally drive to work?

A: All of a sudden, with stunt cars, requirements can change. All of a sudden, you might hear ‘it needs to go backwards 18 mph.’ So now, we have to figure out how to achieve that when we didn’t expect to. And every day, you’re creating something that didn’t exist, so it’s really exciting.

Longevity is also a big difference in terms of considerations. With films, it has to be reliable, but it only has a certain lifespan. It doesn’t have to be indestructible. It’ll have to do a stunt 1-3 times, or we might know it is going to get destroyed in the first go-round. You’re not designing for thousands of units; you’re designing for seven or so.

When I designed lighting equipment, you might be designing for 250k units a year. So you have to be sure. And tolerances can be different.

Q: It sounds like there’s a very necessary confluence of both the thematic artistic considerations for these cars as well as mechanical function. How does the conceptualization process usually flow through you?

A: In the film industry, there is usually an art department for each film. You get a great picture from them- an artist’s impression, which is a drawing of what they want out of a vehicle. When you try to make what they’ve drawn work with the vehicle you’re modifying, what they’re thinking might not work with the vehicle specified. You have to keep in mind that you need a roll cage, a stunt driver with a helmet, protective gear, etc. to fit into these cars.

At times, I’ll go into SOLIDWORKS, knowing the vehicle we are building these stunt courses off of, and I’ll build a mock-up of the vehicle in a short time. I can then run it through Visualize. I’ll put it in a desert or on a highway scene, and it looks great.

That goes to the art director for approval, and we have a collaborative process where they might suggest things with an artist’s drawings and I can easily add it in 3D in SOLIDWORKS. SOLIDWORKS is so cool to use, for example, to make something so quickly that looks amazing – and to get several different looks at a concept. 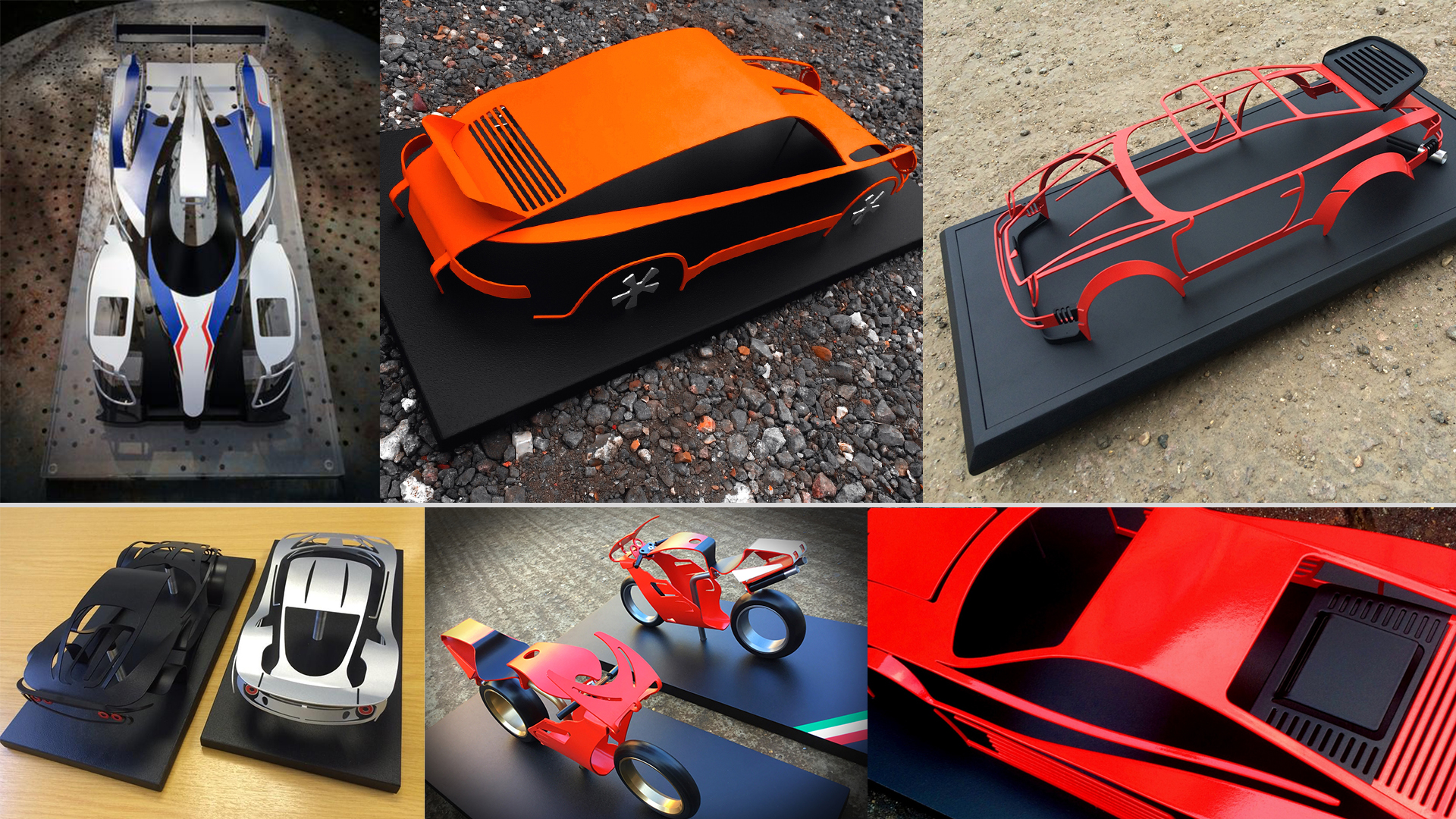 In terms of his film work: what’s Dave up to next? One of the next films Dave’s done work on, Infinite (starring Mark Wahlberg), is due for release in 2021. And, if you’re into cars whatsoever – or know someone who is – I absolutely implore you to check out Dave’s awesome 3D sculptures. I’ve included some examples here, and you can contact him via his website to learn how to get one of your own!