The SOLIDWORKS community is home to all different types of users who create the products that make our world go round. We have users who create machinery, high tech devices, consumer products, and much, much more.

As the world evolves, our users adapt. They change their products, along their ways of doing things, in order to keep up with the tides of innovation that come over time.

Preparing individuals to enter the ever-changing workforce is the mission of our colleges and universities around the world – to prepare their students to contribute to and keep up with these changes. One school that aims to do this in a relatively progressive manner is Full Sail University.

Full Sail University has a program called the Simulation & Visualization program. It provides students access to SOLIDWORKS, as well as other tools, to give students experience “with the programming and critical-thinking skills needed to study and design virtual systems.”

One student working towards earning his B.S. in this program is Jaime Soto. Jaime is a student from Colombia who’s currently studying in Florida. I’ve gotten to know him over the past couple months as he’s worked to complete his finals project for the year.

The project? To build a miniature Stewart platform and pair it with Unity, a widely-used development platform enabling 3D visualizations, to make a gaming experience featuring the use of physical controllers. As part of the project, the platform would serve to practically mimic the input fed to Unity by the controllers (like the thrusters).

On a call with Jaime, he explained the process in detail:

Now, if you’re unfamiliar with what a Stewart platform is, our friend Wikipedia offers a succinct definition. It’s “a type of parallel manipulator that has six prismatic actuators, commonly hydraulic jacks or electric linear actuators, attached in pairs to three positions on the platform’s baseplate, crossing over to three mounting points on a top plate.”

But who are we kidding? We are SOLIDWORKS! We’re visual learners. And we’re writing an article about Jaime. Let’s take an even closer look at how he put this thing together, piece by piece.

Miniature Stewart platform made at @FullSail! It has movement in all 6 Degrees of Freedom and uses an Arduino Pro Mini. pic.twitter.com/qeNaYrTcqj

From a mechanics standpoint, how did he get here?

Anyone who uses SOLIDWORKS knows of its ability to perform powerful design automations. Testing kinematic motion before part production, as he told me, was core to the build process for Jaime’s platform.

Using SOLIDWORKS, he was able to discern “what the movement of the top platform needs to look like for each degree of freedom.”

For the physical platform, Jaime had acrylic and plastic parts made. He created these using a couple different methods, including laser cutting and 3D printing. “The middle plate was laser cut,” Jaime said. “It included some slots for the servo wires to go through.” 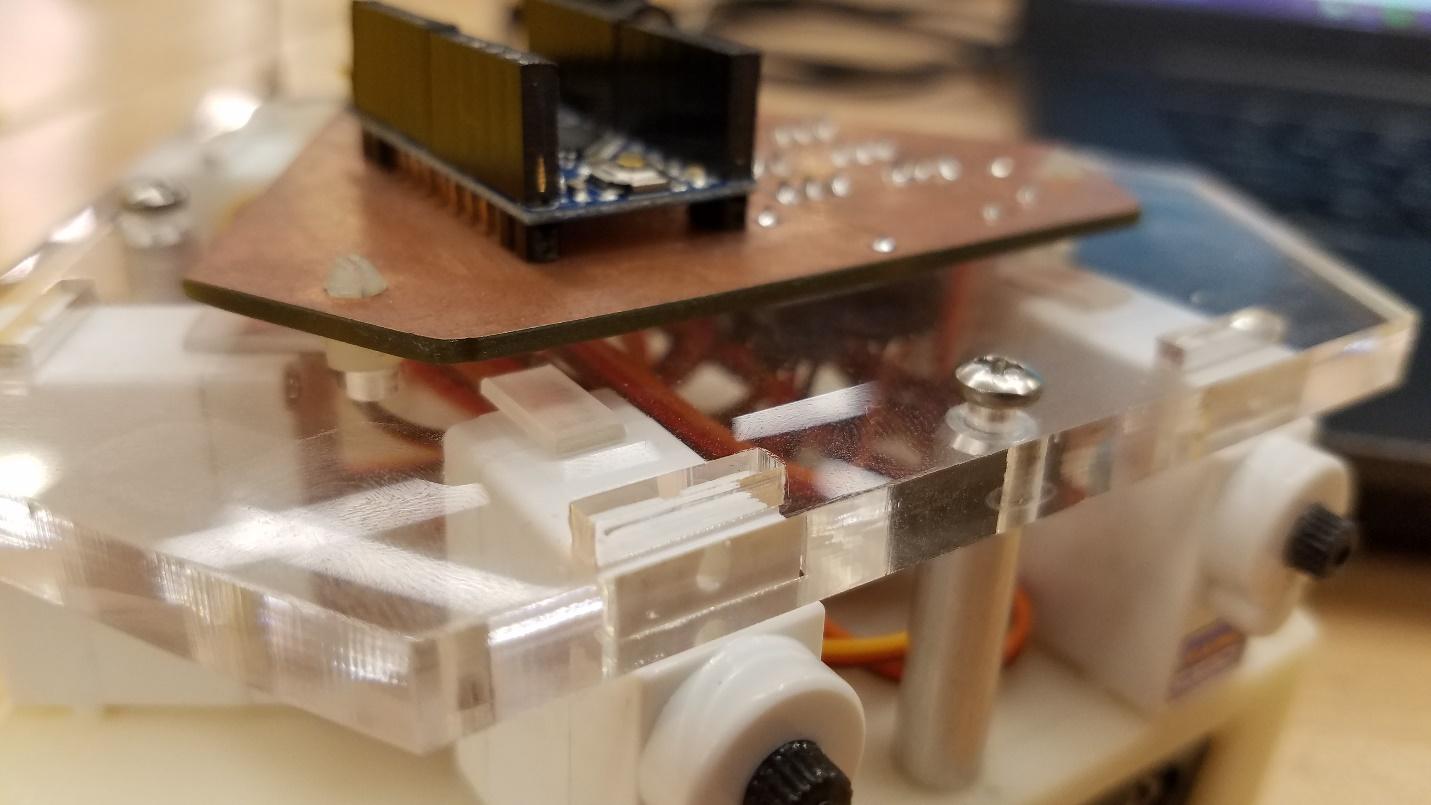 “We needed everything to fit perfectly.”

Once he got the acrylic and plastic parts put assembled together, it was time to integrate the circuit board. For that, he utilized an Arduino Pro Mini. “The Arduino Pro Mini sits on a custom cut circuit board alongside a power plug and some pins for the servos on the bottom side,” Jaime explained. 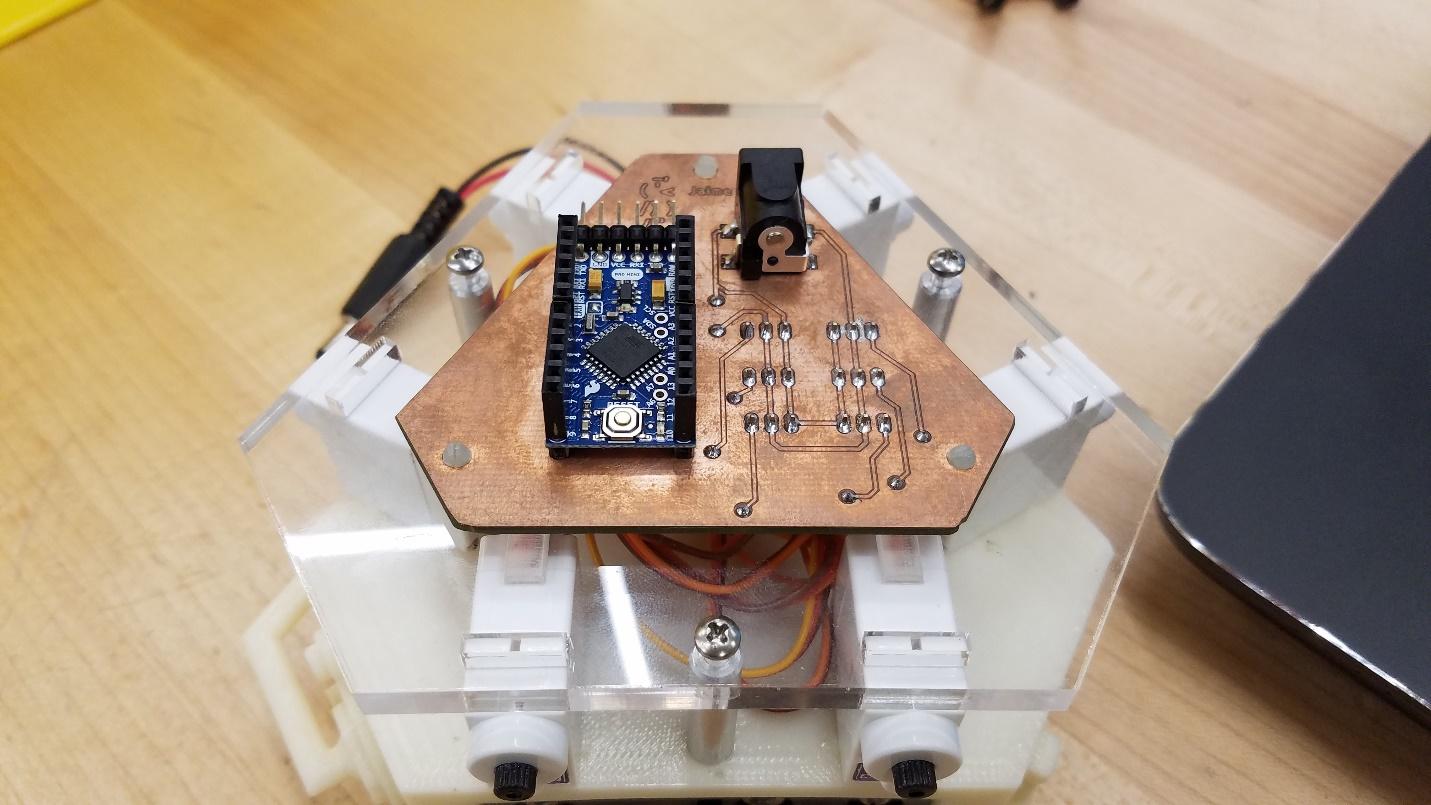 In terms of programming the actual movement planned in SOLIDWORKS, he “needed to move the servos to match” the calculations they’d come up with.

“It took some tweaking and testing, but we finally got the platform dancing through all six degrees of freedom,” Jaime intimated.

It’s important to remember the goal of making this platform — and it hallmarks a unique benefit of the program Full Sail offers. With this project, Jaime got to leverage skills in part creation, using circuit boards, and 3D visualization to make a remote-controlled, enjoyable graphical experience.

Next up: He mounted a model of a miniature SpaceX Tesla Roadster onto the platform, and incorporated custom, physical controls. 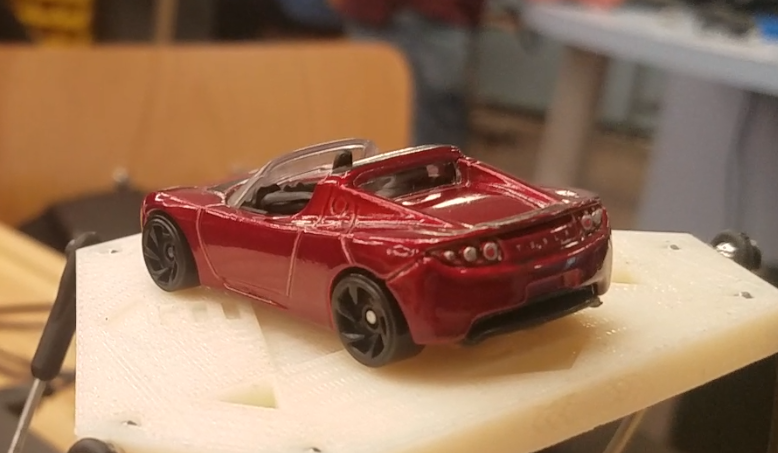 “For the controllers, I went ahead and made some thruster controls that fit a potentiometer and screwed them onto a piece of wood,” Jaime explained. “The potentiometers are connected to the Arduino Pro Mini which then sends information to Unity.” 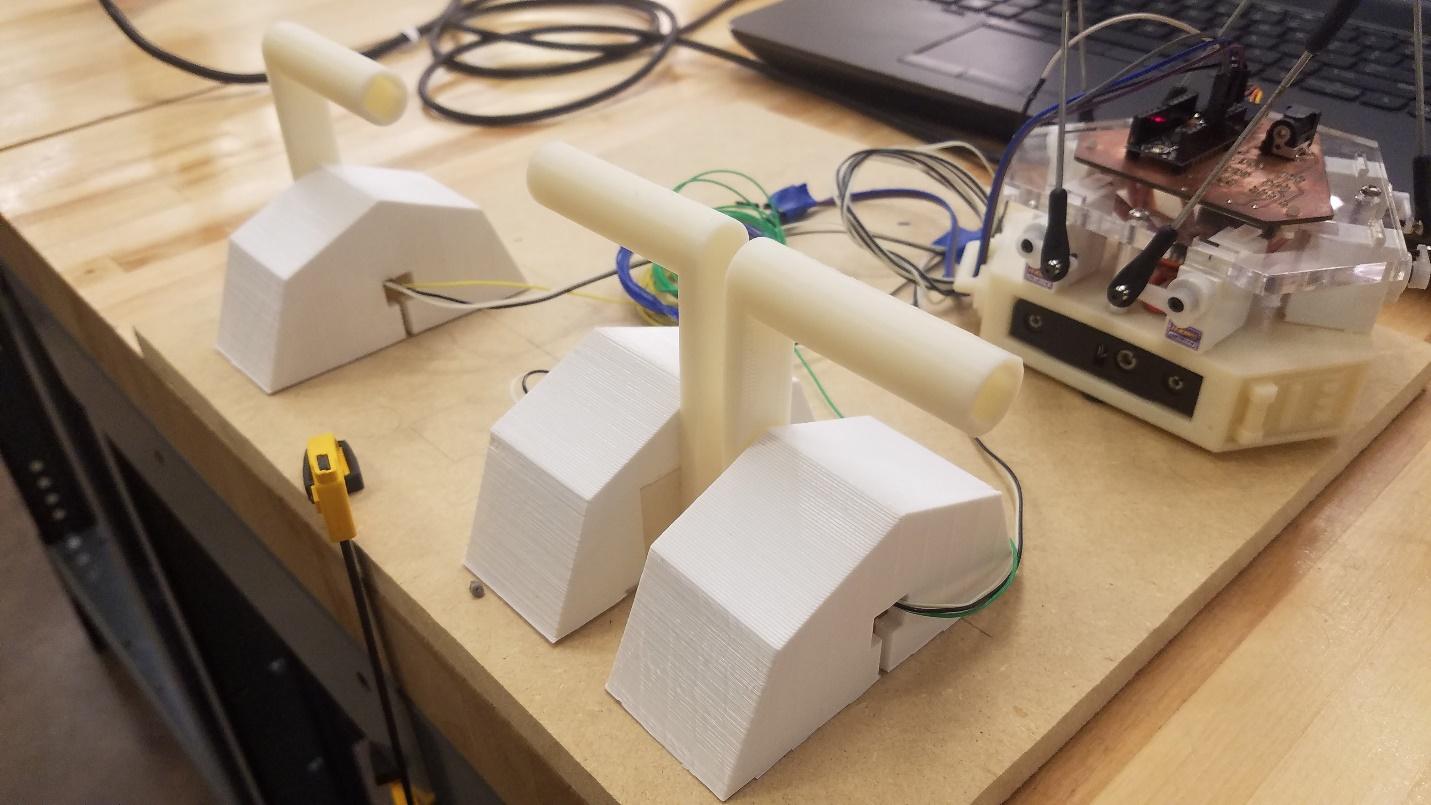 Exploring the full integration of the system further, Jaime went on: “As the Arduino sends information to Unity, it is also receiving information and adjusting its position to match what you would feel if you were in the car.”

“To fly the car, you have 3 thrusters controlled by each lever. One on each side of the car (left, right) and one at the end (pitch).”

Jaime continued: “I added some neat particle trails to each thruster and created two scenarios – a ‘sandbox’ where you fly around space and just play around with the controllers and particles, and a challenge scenario where you have to pilot the car through checkpoints in a set amount of time.” 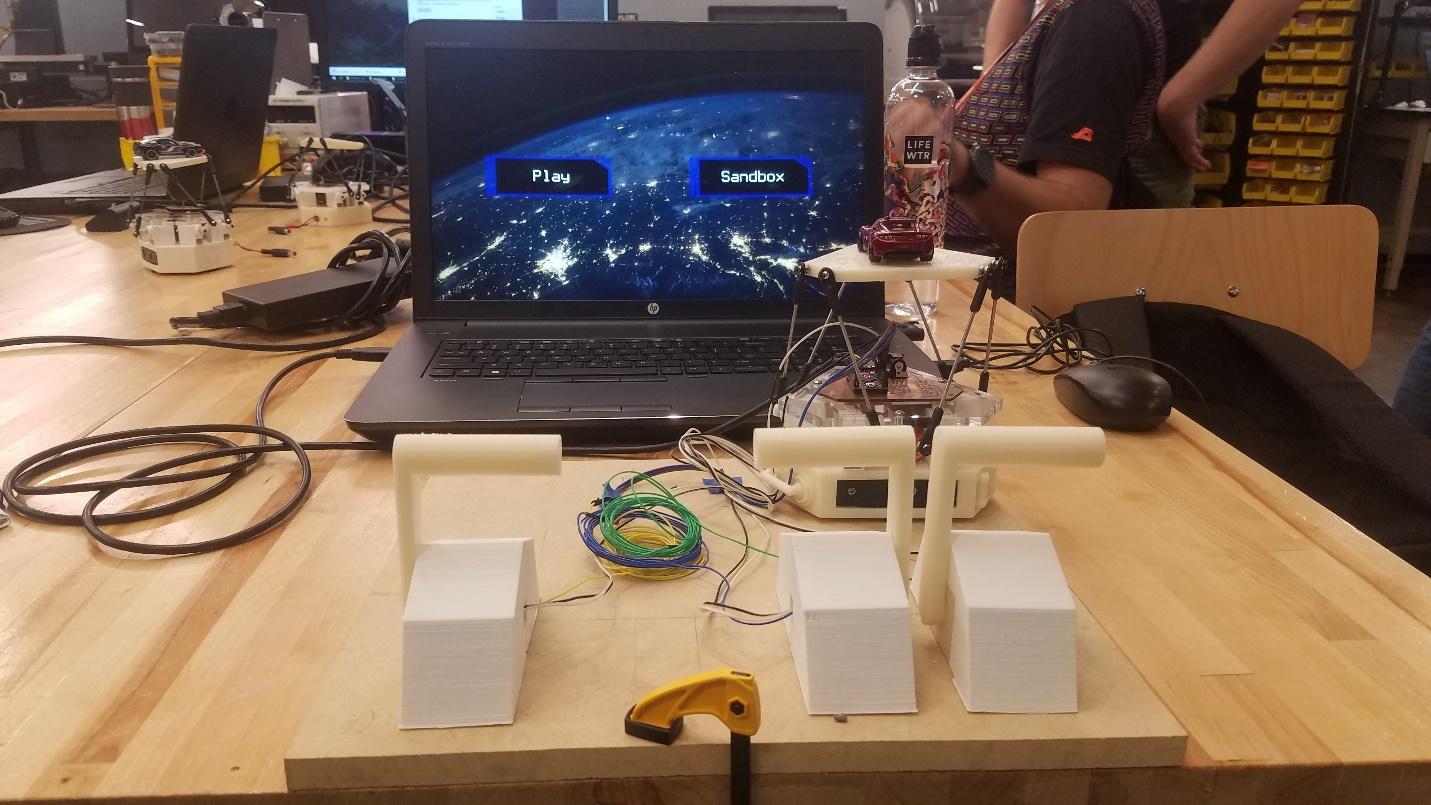 As Full Sail states, the goal of their Simulation & Visualization program is to prepare its students to become part of a community of engineers who will “provide vital solutions necessary for growth across a variety of disciplines.”

The usage cases for 3D visualization technology will only continue to evolve, with individuals like Jaime working hard to set themselves up as leaders for the future in this growing field.