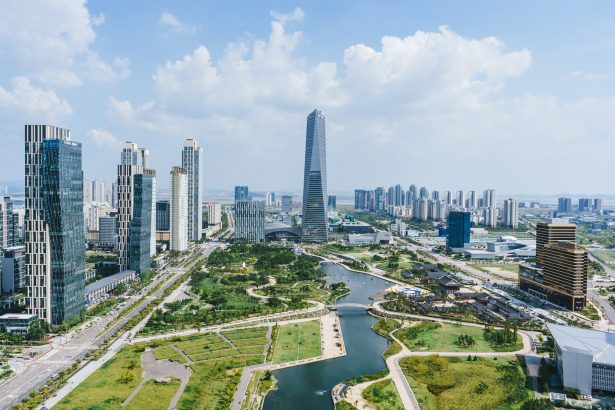 The concept of home is intensely personal. For some it represents safety and security. For others it’s a place to escape from the rigours of modernity. Yet, while those definitions may prove timeless, the homes of the future look set to be connected learning environments that are seamlessly integrated with the urban community around them.

Taking the bins out and sorting the recycling. Presumably it’s not at the top of your list of hobbies. Alas, it’s just one of those many chores that are part of looking after your home. Unless you live in Songdo in South Korea, where household waste is sucked straight from the kitchen, to a central sorting facility, via an underground network of pneumatic tubes. There it’s either turned into energy for the city, or recycled.

Construction work on Songdo started from scratch back in 2002. It shows what’s possible with modern urban planning and serves as a fascinating test case in the journey towards the cities of the near-future. With 31 percent compound annual growth rate in the number of connected homes in the U.S. between 2015 and 2017, a revolution in urban living is upon us. But what will it look like  and how does a smart home integrate with a smart city?

Powering this urban revolution requires energy. Lots of it. No city – smart or otherwise – can survive without power, and with 60 percent of the world’s population expected to live in cities by 2030, it’s essential that cities are proactive in resolving their energy challenges.

However, it’s the top-down changes in energy consumption made possible by smart cities that are most exciting. The era of big data provides infrastructure managers and urban planners with a treasure trove of anonymised information on real-time energy consumption across entire cityscapes – as is for Berlin. That makes it easier to manage urban environments in real-time, while allowing urban planners to more accurately scrutinise long-term strategy. So while items such as smart meters and smart radiator valves – the use of which is growing rapidly – may define energy-related innovations at the micro-level, the bigger picture is one of each connected home contributing to a city-wide picture of energy consumption.

Fanning the flames of the future

Between 2nd and 5th September 1666, a fire ripped through central London that destroyed 87 parish churches as well as the homes of an estimated 70,000 of the city’s 80,000 inhabitants. The Great Fire of London has since been immortalised in history – and while fire-fighting techniques have obviously come a long way since the seventeenth-century, 1666 serves as a pressing reminder of the ferocity with which fire can scorch the urban environment.

The future is one where smart smoke and fire alarms automatically contact the emergency services and warn neighbouring residents. This type of preventative maintenance will become increasingly commonplace as smart homes become more entwined with smart cities. For instance, the same pipe-monitoring technology used to inform the homeowner of a leaky water pipe can be used to inform local authorities of developing problems with the sewer network. Using digitally-connected monitoring technology to solve problems before they develop could save huge sums of money and prevent frustrating disruption to civil infrastructure.

Whose data is it anyway?

Big data makes the management, provision and planning of civil services in tomorrow’s urban environments far easier and more cost-effective for local authorities, but there will be inevitable questions about the way in which data is collected, stored and interpreted. There are also critical security issues to consider lest the very infrastructure of tomorrow’s cities be left open to cyber attack. Therein lies the bone of contention as we hurtle towards the era of the smart home. The connected products made possible by the IoT come with remarkable capabilities. But where is all that data going?

There is inevitable medical benefit in stool analysis – and the homeowners of tomorrow will have the ability to purchase that study their morning offerings for bacterial and parasitic infections, blood cell loss and dietary sensitivities. But who owns that data and who else has access? Likewise, there are privacy concerns with connected children’s toys that capture your progeny’s biometric data to monitor health and wellbeing. “Digital parenting is the future of child rearing”, one of the more positive articles about the smart future. Whether you see that prospect as a thrilling innovation or the harbinger of digital dystopia is down to you.