The Red Bull Soapbox Race is a global series of events that pit amateur drivers racing in homemade soapbox cars against each other in a battle not just for speed but for most innovative design. This unique non-motorized racing event challenges both experienced racers and amateurs alike to design and build outrageous, human-powered soapbox dream machines and compete against the clock in a downhill race.

The rules are quite simple: all crafts must be human-powered, meaning no engines, pedals or external energy sources; the machine cannot exceed a maximum of six feet wide, 12 feet long, be at least seven inches from the ground and can’t be taller than seven feet; must have fully functioning brakes and steering; and it can’t weigh more than 176 pounds. Easy, right? Well, add in some crazy obstacles, like jumps, stairs, and bowl turns, to the course you’re trying to barrel down at break-neck speed and things can get interesting. 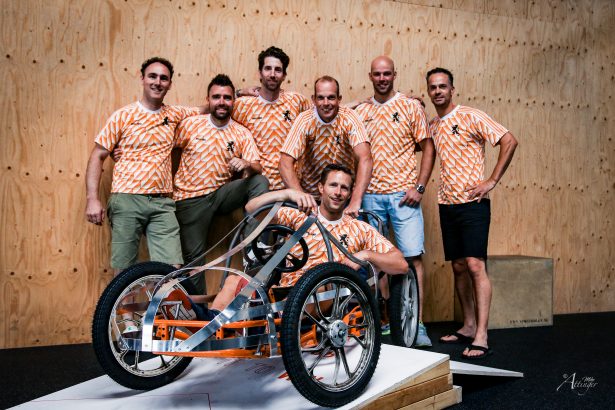 One of the teams (shown in image above) competing in the Red Bull Soapbox event in Valkenburg, The Netherlands, on August 19th is a team sponsored by SOLIDWORKS value-added reseller CAD2M. The team includes an interesting assortment of men from various backgrounds, including a retired semi-professional dirt bike racer who will drive the car, four mechanics three of whom work in the automotive industry and one who is a skilled carpenter, and Teun Willems, the marketing manager at CAD2M.

The theme of the team’s car is the Soccer European Championship of 1988. “People might know that right now our squad is not performing that well. We want to bring the swagger back so we decided to build an 1988 soccer shoe to race, with and we’ll be flying the original Team88 colors,” says Willems. “Hopefully we’ll inspire the players to find another gear and propel us to the top of ranking once more.”

Will SOLIDWORKS be the team’s secret to success?

The team started out by buying an old go-kart frame; drew the frame in SOLIDWORKS and then determined where they would place the driver. But first the team did their homework by studying the previous year’s event in which many of the teams did not finish because they crashed at the course’s jumps. “Their crafts would nose dive violently, breaking wheels and frames in the process,” says Willems. “So we used SOLIDWORKS to find the center of mass and move it. This should allow is to keep the craft more level at jumps, thus improving our chances of finishing the race.”

The team used SOLIDWORKS Simulation to determine whether their vehicle could withstand the beating of jumps, stairs and bowl turns, since go-karts are typically designed to race on flat tracks. “We used the frame design in SOLIDWORKS and ran a structural analysis, which showed us that the frame could take the abuse,” says Willems. “We then removed the motor mount structure in the design and used SOLIDWORKS to run another structural analysis to determine we had not weakened the frame. There is an 80-kg weight limit so we needed to cut some parts off. Analysis showed that the frame was still strong enough without the motor mount structure.”

The next step was to determine the right shape of the rear of the craft in order to make it as aerodynamic as possible. The team decided to test three different options to determine the optimum design: flat, round and cone-shaped. “Analysis showed the round shape resulted in the lowest drag coefficient, which should allow us to gain tenths of a second. We expect that racing will be this close. It’s a 350 meter track with 8 percent decline. It will be over quickly and every second counts. It’s almost like F1!”

The team has high expectations, feeling it will finish strong and be in contention for both the fastest time and the most stylish craft. “But this is a crazy race and crazy things can and will happen,” predicts Willems. “One mistake at the moguls (like mogul skiing) and you’re off into the hay bales. So we aim to have fun and just do the best we can and prepare for what we know is coming. We know our craft is tested both virtually and physically. We know our driver is fast. So bring it on!”

You can help out the team by voting for them here, which the jury will take into account to determine their overall ranking. Look for the “Vote Now” button.

Find out how to put SOLIDWORKS Simulation to work on your own design projects by clicking the banner below and downloading the white paper, “Superior Product Design Through Powerful In-CAD Simulation.”