From Kazakhstan to the coastal waters of the UK, through volatile oil fields and across the frontline of warzones, a remarkable design and engineering firm in Devon is using SOLIDWORKS to save thousands of lives. 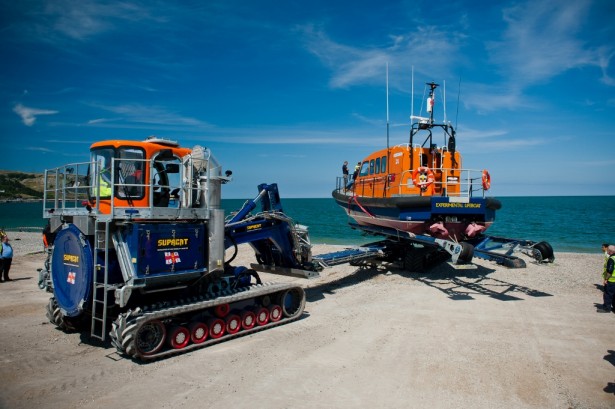 Ask any CAD engineer. It’s a special moment when you get the first glimpse of a finished product that started life as a bunch of notepad sketches and rough CAD files. But when you know that your carefully designed product is going to save lives too? Well that must be some sense of satisfaction. Just ask Supacat.

Meet Supacat, an engineering and design firm based in Devon. Nothing unusual there, you might think. Yet what makes Supacat unique is the projects they work on. In a nutshell they create innovative emergency response vehicles and defence transport for the world’s most challenging terrains and environments. Their clients include the Royal National Lifeboat Institution (RNLI) and the Ministry of Defence. The other notable thing about Supacat? They’re a SOLIDWORKS customer.

When an emergency call comes in, every minute counts for the RNLI. Their 18-tonne Shannon-class lifeboats are capable of racing through violent seas to help those in urgent need of lifesaving support. But getting those boats in the water to begin with – across gravel and shingle beaches – is a major, major challenge at lifeboat stations where there is no slipway or harbour or where there may be considerable tidal variation.

Supacat have designed a launch and recovery system (L&RS) that has changed everything.

The vehicle is a four-track drive hydraulic control system, which supports the integrated movement of both the tractor unit and the carriage elements of the articulated vehicle. The cab and engine housing is watertight, capable of withstanding tides of up to 9 metres as well as periods of total submersion. In short, the L&RS can carry the lifeboat right into the sea for launch. And because each system’s rear cradle can be rotated 360 degrees, lifeboats can be picked up from a bow-first beached position, rotated and ready for bow-first relaunch within five minutes flat.

Hot-zinc sprayed components help to give each L&RS a projected 50-year lifespan, during which the RNLI estimates each Supacat L&RS will help to save 56,000 lives. Thanks to modelling in SOLIDWORKS, the design – which features thousands of separate parts – was right first time.

From waves to flames…

It’s not just at sea where Supacat are helping emergency services with rapid response times. The Supacat Utility Vehicle 600 (SUV 600) gives fire services a fast, effective way of responding to emergency callouts in challenging environments, where access is too narrow or the terrain is impassable for regular fire engines. In essence Supacat’s design is a powerful Land Rover Discovery 4×4, with an added third axle to increase payload capacity and physical space. It can carry four firefighters and – crucially – water tanks and some seriously heavy duty pumping equipment.

When you are in the middle of a warzone, you need to be able to trust your equipment. And for heavily-armoured military vehicles, the MoD turned to Supacat. The result is a fleet of go-anywhere all-terrain vehicles that are uniquely designed for emerging battlefield challenges. (You can take a look here.)

Driving through explosive environments – somewhere in the North Caspian Sea

Hate your commute to work? Spare a thought for the staff of Agip ENI, slogging it out on a manmade island called Complex D in the middle of the icy North Caspian Sea. The crews are working on the experimental phase of the Kashagan oil field development – and if the temperature wasn’t bad enough, there’s also the risk of toxic gases and lethal explosions.

To transport workers from A to B on Complex D, Agip ENI enlisted Supacat to create the world’s first passenger transit vehicle (PTV) to meet the Oil and Gas industry’s ATEX Zone 2 standard for operation in hazardous and explosive environments. The result is a vehicle that packs brains as well as brawn.

The PTV is a 4×4 Mercedes Sprinter with jaw-dropping enhancements. Passengers are protected from explosive hydrocarbons and toxic gases through an onboard Gas Detection System, which constantly monitors external air quality. If the PTV detects a hazardous gas, an evacuation sequence is initiated that disables the engine and sounds visual and audio alarms, while the over-pressurised cabin and sealed interior protects passengers from gas ingress to allow all crew plenty of time to don evacuation breathing apparatus. A water-cooled exhaust and turbo system as well as full electrostatic protection means the PTV can operate in extreme temperatures and combustible environments.

Land, sea and oil field, Supacat are saving lives. Here’s to them.