Riley Lewis, 13 and a quarter years old, is an archery instructor, jazz flutist, blacksmith (in the Victorian style), inventor, and the youngest known user of SolidWorks software. After a 15-minute chat, you want to add genius to the list, but there’s no value in setting apart a bright, articulate, engaging, impressive young man like this. We need him. 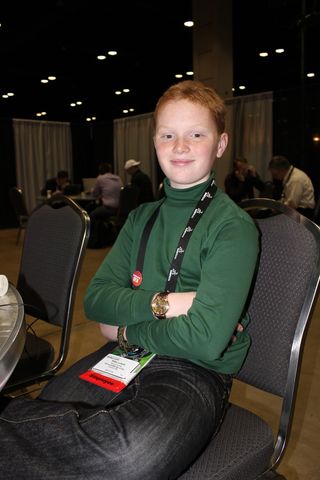 He’s quite clearly having the time of his life here at SolidWorks World 2011 among thousands of fellow inventors. When we found him in the Partner Pavilion, he was fiddling with a new 3Dconnexion mouse he got in return for an impromptu demo he gave at their booth.

The seventh-grader at Discovery Charter School in San Jose, Calif., discovered SolidWorks at age 11 when Google SketchUp just wasn’t cutting it for him. For a school project, he’d been modeling a prototype of a device that would clear space junk out of the sky. The prototype included a cantilever arm made of PVC, which turned out to flex too much. “SolidWorks,” he says, “could have told us that ahead of time and saved us fifty bucks and two months.”

About the same time, professional engineer Elise Moss visited his school and offered students a chance to use SolidWorks. Riley, more than anyone, glommed on to it. With the help of SolidWorks materials definition capabilities, his team ended up replacing the PVC pipe with an aluminum pool pole and a special quick-release mechanism Riley designed. That helped his team earn fourth place in a competition involving 250 teams in three age categories. “It was pretty important for us to use SolidWorks in that competition,” Riley says. “I had been using Google SketchUp for a while and found it wooden and limited. SolidWorks had so many options and the usability was great.”

Okay, cool, that explains why he’s using SolidWorks, but why was an 11-year-old cadding things up in the first place?

“I love being creative,” he says, almost levitating from his chair in the Internet Café. “I’ve been building stuff since age four. It doesn’t matter what it is, any medium, I will be able to build something in it.” You believe him.

His first creation was a tower of blocks with a catapult on top. It was evidently a fully functioning one. “I managed to whack my brother in the nose with it.” Later, Riley built a writing device based on a Victorian draftsman’s pen. And now? “I want to bring my latest prototype to market. It’s an unpickable lock.”

Yes, he picks locks. He taught himself using what he calls online “curriculums,” some from MIT. He can very completely, precisely and convincingly explain how his lock design is better; it goes over your head, however, if you’re not as technical as you’d like to be. He knows of no picks that can defeat his design and no other locks that are unpickable.

We mention a lock brand.

“Give me five seconds,” he says.

He’s just as agile with a bow. He says he can skewer a grapefruit with an arrow at 70 yards. He proud of that, but he’s generous with his acumen. He loves helping doubtful newbies learn to hit bull’s eyes.

He’d also like to help some other folks – like, you know, folks making locks. Maybe their customers would like them to be unpickable. Maybe Riley's design is worth a look. We got 15 minutes with him, and it’s 15 minutes we wouldn’t trade. We need him. And as with the bow and arrow, he can’t miss.

Latest posts by stevemcgrath (see all)