Why Render in SOLIDWORKS Visualize?

Minimize effort and maximize impact; it’s what we’re all aiming for, isn’t it? We all want to expend as little effort as we can and get as much for it as possible. There is something satisfying about optimizing your time. As the old saying goes, time is money.

When it comes to rendering, many people see it as that optional last step that will get done if there is time. But I think the world is shifting. The request is on the rise to see a product in its environment before signing off on a project or committing to purchase. And why shouldn’t it? It just makes sense.

My stance has always been to encourage users to make their CAD data work harder for them. How much time do you suppose goes into any given model by the time it gets completed? It varies given the scale of the project but it’s a significant percentage of engineering time spent. It’s worth it, no doubt. The benefits of 3D modeling far outweigh the time it takes to do so. However, we all want to be smart with our investments. If that time investment could be paying greater dividends, I say, LET IT!

And so it is with rendering. A 3D model is a great investment of resources. It kills me to see groups take a finished model and throw it in the trash heap, so to speak, by archiving it away when they’re done. In a post a-model-yptic world, that model still has some meat on its bones!

Rendering is a great way to get more from your models. With PhotoView 360, I always pushed for people to just create static images. With Visualize becoming available, I’ve changed my tune. With the speed and consistency that Visualize provides, I think a rendered video with simple camera motion has the most “bang for your buck.” It has all the signs of making you an all-star when it comes to minimizing effort and maximizing impact.

Setup time is nearly identical to setting up for a single image render. Set it how you like it, nudge the camera, and let it render. THAT’S IT. Do you want those static images too? No problem, Visualize has already created and saved every frame. Pick the one you like and throw it on the website or in the catalog. You’ve spent the same amount of time, doubled your efforts and gotten a more engaging result along with the static images you would have created anyway.

To me, it’s a no-brainer. That being said, not everyone thinks like a videographer. So to that end, I’ve created these resources for you. In this session we’ll talk about how a camera works and the next session we’ll cover some common video moves that you can re-create in your digital world. In this article I hope to give you a solid understanding of how a camera works so you can translate that information to using Visualize as the camera for your CAD data!

In real life, a camera creates an image by allowing light to pass through the lens where it will focus the beams of light onto the camera’s image sensor (or film if you’re old school). The photographer controls how much light passes through to the sensor with 2 gates. One is called the Aperture and one is called the Shutter as seen below. 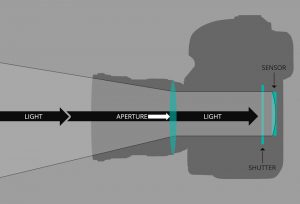 The Aperture is nothing more than an adjustable size hole within the lens. As you can imagine, a larger size hole lets in more light just like opening up the blinds on your windows. This is measured in an “f-stop” value. On a physical lens you may see a range of something like f1.4-f22. A smaller value indicates a larger physical size of the Aperture. (The reason for the strange values is that it is a ratio of the focal length to the physical Aperture size. This allows photographers and videographers to understand how one lens compares to others regardless of focal length)

The Shutter meters light by the amount of time it stays open. For this reason you will see the shutter listed on a camera as a fraction. This is giving you the fraction of a second that the shutter will stay open.

In the land of the living, the camera’s operator will balance a combination of Aperture, Shutter speed and a value called ISO. ISO controls how quickly the sensor processes light. Fortunately for us, in the digital rendering world, we don’t have to be quite so concerned with getting the correct amount of light to the sensor. This essentially eliminates the Shutter speed and ISO values from the equation. We can simply turn the brightness up or down manually.

So why leave the Aperture control if we can control the amount of light manually? The reason for this is because the Aperture gives us additional control that the Shutter does not.

With an open Aperture (low f-stop value), light approaches the sensor at a different angle than it does with a small one (large f-stop value). See the image below. 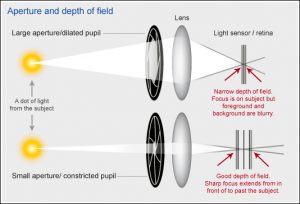 In this image you can see why this happens. The result of this effect allows us to control HOW MUCH of the image is in focus. This technique is called adjusting the “Depth of Field.”
“Well, I want everything in focus of course” you say. Not always. That’s the engineer in you talking. It can be very powerful to draw the viewer’s eye to a particular detail. When used in combination with a video, you can move focus from one detail to the next.

Ok. We’ve covered Aperture, Shutter and ISO and we’ve discovered that Aperture is the most useful for us in rendering in that it allows for “Depth of Field” control. Is there any other camera terminology we should know for rendering? Yes. Focal Length is the last term we’ll look at today. In laymen’s terms, the Focal Length is how far zoomed in you are and is measured in millimeters. Two factors play a role in how large the object appears to us whether we are rendering or shooting a camera live.

We can adjust the size of the object in the frame by:

We’ve become used to those two things being one and the same, but that’s not the case. On small point and shoot or smart phone cameras, digital zoom does not produce the same effect as changing Focal Length on an interchangeable lens camera. To a photographer/videographer, Focal Length is an artistic choice more so than a convenience factor. A change in Focal Length typically means taking one lens off and replacing it with a different one. While it is true that some lenses offer adjustable Focal Length, I find it easier to think of Focal Length simply as what lens we have on our digital camera.

This choice can be purely artistic choice at this point. We have none of the constraints as to where we can physically place the camera that we may encounter in real life. The Focal Length will change how much perspective we see in the image. A wider angle lens will have a small value in mm and will give you a more aggressive perspective. Likewise, a telephoto style lens will have a larger value in mm and will give you less perspective.

This was accomplished by taking the wide angle 20mm shot at a physically closer distance as you can see in the diagram below. 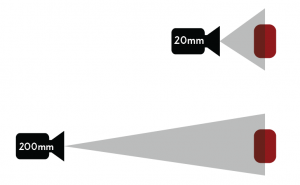 This results in similar framing, but a significant difference in perspective.

So there you have it! That is the basics of how a camera works and what those controls do for you in terms of the resulting image. My approach to setting up a camera when rendering is as follows:

You will see all of these options present in the camera settings on the Camera Tab in Visualize.

In GREEN, the image shape. How tall and wide do you want the image?

In BLUE, choose your “lens.” These sliders move together. I set Focal Length rather than Perspective. 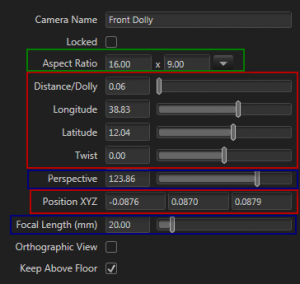 Further down in the settings you will see Depth of Field settings.

From within here, you can turn the feature on or off, adjust what you are focusing on and choose your Aperture settings. Aperture (mm) allows you to set the size of the aperture directly, F Stop allows you to set aperture using camera terminology. I set the Depth of Field using F Stop.

Thanks for reading and happy rendering!

If you just can’t wait for the next session (or want to see it in action), go ahead and watch my webinar, which covers this topic, below!

Senior Application Engineer at CADimensions
I’ve loved SOLIDWORKS since the first time I used it! As an application engineer, my passion is learning and sharing know-how on all kinds of SOLIDWORKS and partner products! My hobbies include: cars, motorcycles, music, photography, videography, woodworking…there’s not much I don’t enjoy doing!