Just like my previous modeling challenges, give this one a shot on your own before scrolling down and reading some of the possible solutions.  As always, feel free to share even more tips and tricks in the comments below.  Today’s challenge is to add 10 degrees of draft to the end of this 2016 cylindrical SOLIDWORKS model while respecting the current location of the fillet.  This may sound easy, but drafting around curved faces such as fillets can be trickier than it seems. 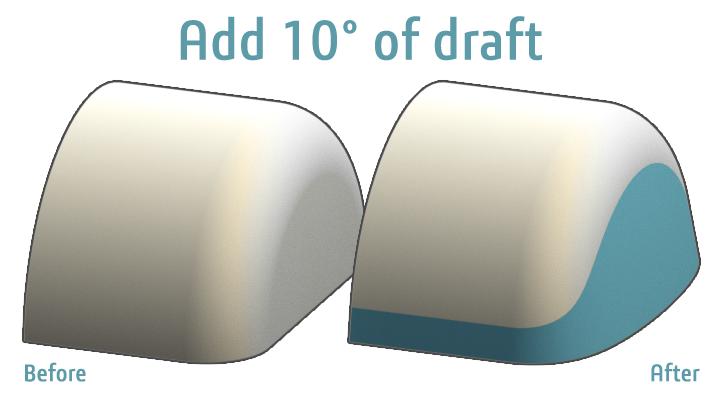 Typically, the best practice for adding draft is to do so before adding fillets.  Just like you learned in Solid Modeling 101, save fillets for the end of your feature tree.  They complicate models by multiplying the total quantity of faces and edges, and should be used as a finishing touch.

This would normally be an acceptable approach, but in this challenge, we do not have the liberty to alter the original location of the fillet.  Let’s try this again by adding the draft after the fillet feature.

The intent of a fillet is to smoothly transition between two faces that would otherwise form a sharp corner.  By definition, fillets need to be tangent to their surrounding faces.  Therefore, we cannot draft the end face before cutting back the filleted face to the theoretical tangential edge that would be formed by a 10 degree draft angle.

This approach brings us much closer to a solution, but falls short in a few ways (besides simply taking too many steps):

Knowing we have to account for draft throughout the entire model, let’s try using a more advanced mode of the ‘Draft’ feature to simplify our workflow.

Not only is this method quick and easy, but it leaves us with the most desirable results – exactly 10 degrees of draft on all of the new faces we added to the model.  Perfect!

Territory Technical Manager - NA East at SOLIDWORKS
Jordan has been serving the SOLIDWORKS community for over 10 years. He’s a mechanical engineer by day and a wannabe artist by night, so he’s at his best when he’s forced to use both sides of his brain to solve complex modeling challenges. If you have one for him, don’t hesitate to share it. His specialties are surface modeling, industrial design, cloud solutions, and technical communications.