577 enhancements ideas are available for voting in the SOLIDWORKS World Top Ten List. You’re bound to fin many you’ll adhere to. So vote for them to show your support.

The Top Ten List will be revealed during the SOLIDWORKS World 2016 in Dallas.

We look forward to seeing your ideas and hope to see you there.

With contributions from Joe Galliera

SOLIDWORKS Flow Simulation 2016 introduces a couple of new thermal parameter results that are actually quite new to thermal analysis. Yes, you read that correctly, new to Thermal analysis… the whole field!

What are they? The Bottleneck (Bn) number and the Shortcut (Sc) number. For this breakthrough, there is actually a US Patent Pending for Mentor Graphics and the inventors: Robin Bornoff, John Parry, Byron Blackmore and Alan Davies.

The Bottleneck and Shortcut numbers are used primarily in electronics systems and other thermal systems.

In a blog post, Robin Bornoff writes: “ ‘Thermal bottleneck’ [is] a well recognized phrase playing on a very obvious analogy. Despite this there were few attempts to quantify such a parameter. Spurred on by its relevance in electronic thermal design, we did just that, put hard numbers to the concept.”

The Bottleneck number identifies flow paths that carry high heat, while at the same time resist the flow of that heat. Definition of the Bottleneck number considers the ‘dot product’ of heat flux and temperature gradient vectors at any point per the following equation.

The Bn is large when:

This is true when the heat experiences a resistance in the direction of heat flow. When a lot of heat flows in a region of a design AND it has difficulty doing so, temperature rises where the heat came from.

Knowing the location of the bottleneck helps make modifications to the design so as to let the heat flow more easily. This decreases the maximum temperature in the design.

The correlation between high temperature and Bottleneck number is flagrant in the example below. See the capacitors: 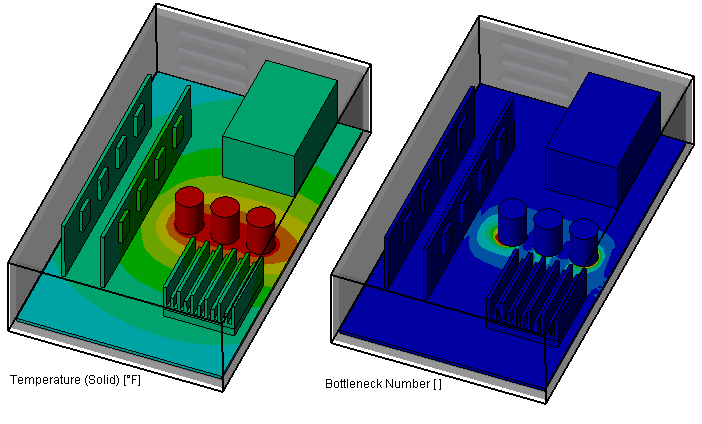 The Shortcut number reveals opportunities for alternate and more efficient heat flow paths, i.e. shortcuts toward cooler areas. A shortcut opportunity exists when it is possible to add a heat flow path in order to bypass the heat to cooler areas.
Definition of the Shortcut number considers the ‘cross product’ of heat flux and temperature gradient vectors at any point per the following equation.

The Sc is large when:

This is true when the heat passes in parallel to a locally colder area.

Where to find them in SOLIDWORKS flow Simulation 2016?

To add Bottleneck (Bn) number and the Shortcut (Sc) number to your plots: 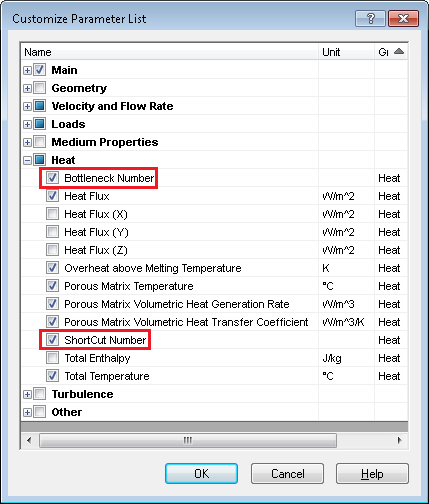 When I apply the “Stability Hotfix for SOLIDWORKS® 2015 SP4” (solution S-070177), what do I do if an error occurs?
In one instance, installation of the hotfix did not succeed because the installer could not stop the process ‘solidworks_fs’.
To work around this issue, perform this steps:
1. Open the Windows Task Manager.
2. Manually stop any instances of the solidworks_fs process.
3. Apply the hotfix.
4. Restart the computer.
From Solution Id: S-070214.

What are the recommended DPI settings when using a 4k monitor with SOLIDWORKS® Enterprise PDM 2015 / 2016?
Some DPI configurations in Windows 7 can cause the EPDM vault explorer view to display distorted menus. This can be caused when the DPI setting is set to a DPI setting of 144 or higher, i.e. a non-default (default setting is DPI 96). This is non-reproducible in Windows 8.1 x64. Recommendations are given in Solution Id: S-070484.

How can I transfer to the Model tab the assembly component positions shown at a specific time in a solved SOLIDWORKS® Motion study?
In SOLIDWORKS® 2016 and newer, it is possible. You can use “Copy Multiple Components” functionality using the simple procedure described Solution Id: S-070544.

Why do I get a ‘Monitor lost connection with solver’ status message when I try to run any project in SOLIDWORKS® Flow Simulation?
Your computer’s firewall software or anti-virus software can block certain processes required by SOLIDWORKS® Flow Simulation. This is true even when you run locally with the ‘Run at’ drop down menu set to ‘This computer’.
Ask your IT department to help you with the procedure described Solution Id: S-070365.

That’s it for this month. Thanks for reading this edition of SOLIDWORKS Support News. If you need additional help with these issues or any others, please contact your SOLIDWORKS Value Added Reseller.

Also, comments and suggestions are welcome. You can enter them below.

Sr. Technical Customer Support Engineer, SolidWorks, EMEA at DS SolidWorks Corp.
I have been a Tech Support engineer for Simulation products since 2002. I was previously a product manager at SRAC, the original makers of COSMOS for those who remember that time! ;-). I am currently in charge of the content of the certification exams for simulation products. I also initiated and still author the Simulation Knowledge Base and participate as much as possible in the expansion and evolution of the SolidWorks Knowledge Base. Finally, I handle the SolidWorks Support Monthly News blog.