Welcome back to the regular schedule of Tech Tip Tuesday after several weeks of new features being released in SOLIDWORKS 2015. That’s not to say they there might not be another hidden gem from SOLIDWORKS 2015 in this week’s post.

Last week, I watched a presentation that covered tons of great hidden gems inside of SOLIDWORKS by Richard Doyle.  Richard manages all of the great user groups, as well as the SOLIDWORKS User Group Blog on this site.  I encourage you to check it out, and more importantly attend a local SOLIDWORKS User Group meeting in your area to learn lots of great tips like the ones below.  You can find a local user group in your area by using the Find a Group link at www.swugn.org.  Later this week I will be writing a post about the great events we attended in Alabama and Tennessee.

Some of the tips Richard shared were ways in which you can dimension sketches in SOLIDWORKS, not very obvious to the new or even the experienced user.

The first of these methods require knowing the correct order and geometry to select to the get the dimension you’re looking for.  I will go over each in detail, and also show the order in which you need to pick the geometry with the Dimension Tool. 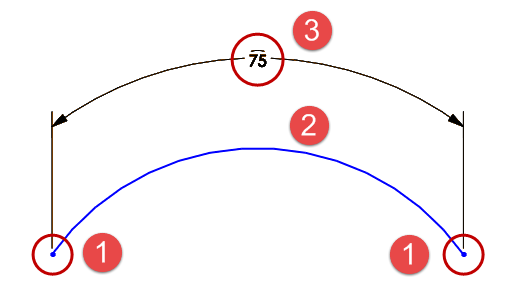 To get the length of an Arc in SOLIDWORKS using Smart Dimension, you need to first select the two end points (1), then select the arc itself (2).  Once you’ve done this you will be presented with a preview of the dimension (3), which you can then place and specify the desired length.  It’s worth mentioning that this dimension by default is a driving dimension.  However, you can add this dimension also as a reference dimension if you only want to see the value. 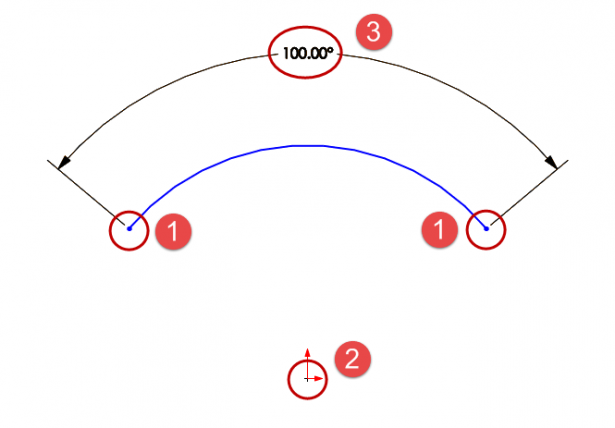 The next dimension allows you to create an angle between two endpoints of an arc without the need to create any Construction Lines.  Typically, users spend the extra time to draw Construction Lines from the center of the arc, and then place angular dimensions on those.  To create this dimension, first, like before select the two endpoints (1).  This time however, select the center of the arc (2).  Like before, you will be presented with a preview of the dimension, in this case an angle (3), which again, you can place and use as either a driving or driven dimension. 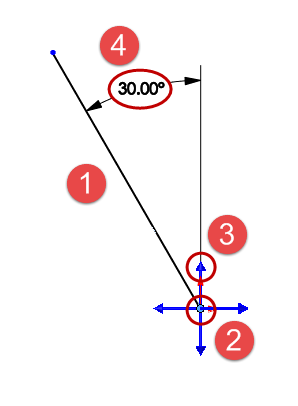 Finally, the last type of mate is another Angle Mate, this time specifically for Lines.  Like before, often times you need to have some form of reference or construction geometry available to reference.  However, in SOLIDWORKS 2015, there’s a new way to create these dimensions, and very flexible in how it works.  First, you need to select the line you want to apply the angle to (1).  Then, select one end point of the line (2).  As soon as you do this, SOLIDWORKS will now present you with a reference Compass in which you need to specify which polar direction you want to apply the angle to (3).  Once you do this, like the other two examples, SOLIDWORKS will present you with a preview of the dimension, and you only need to place it (4).  And of course like the other two examples, this dimension is driving by default.

So, there you have it, 2 existing hidden dimension types you can create, and a new one in SOLIDWORKS 2015.  If you liked this tip, then I highly encourage you to check out a local SOLIDWORKS User Group in your area where you can learn hundreds of tips like these.  Likewise, if in person meetings aren’t your thing, SOLIDWORKS has a huge variety of online training available like this Sketch Learning Module at MySolidWorks.