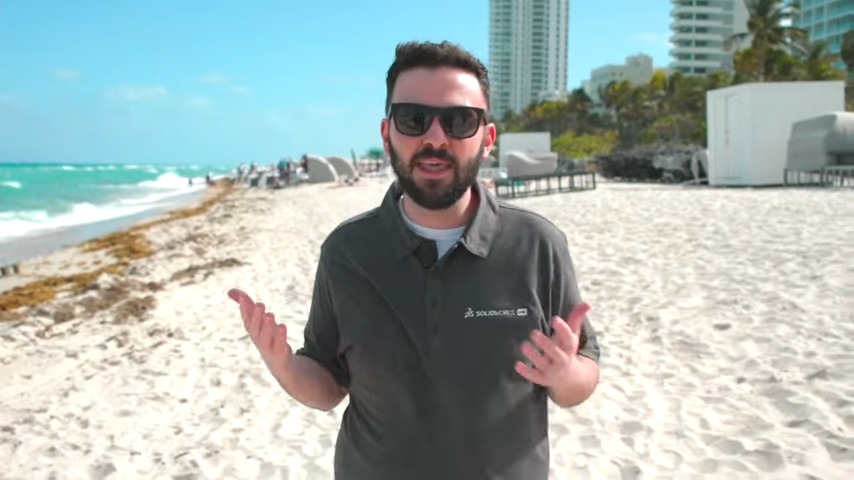 This SOLIDWORKS LIVE episode gives you a behind-the-scenes look at what it is like to be on a BattleBots team and what it means to compete, design, and build bots with a passion for excellence. 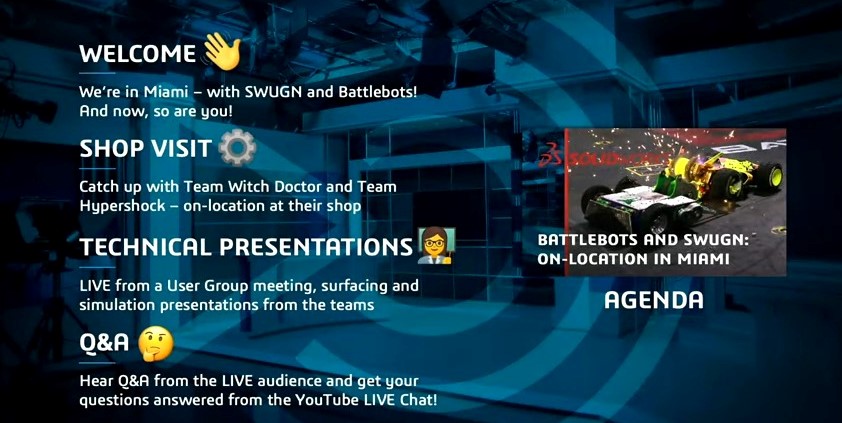 You’ll meet Witch Doctor team members Andrea and Michael Gellatly and HyperShock team members Will Bales and Kyle Awner. The teams will answer both live and virtual-audience member questions about the BattleBot experience, including how to get involved in this rewarding and career-building activity.

Plus, you’ll witness the fun of attending a SWUGN meeting!

During the episode, we visit the shop of HyperShock and Witch Doctor. Both robots are designed in SOLIDWORKS 3D CAD software. Team members talk about how they initially got into building robots, the positive career impact of learning how to build robots in SOLIDWORKS from a young age, and how it feels to see “your baby”—the robot into which you have poured blood, sweat, and tears—get destroyed on national TV. 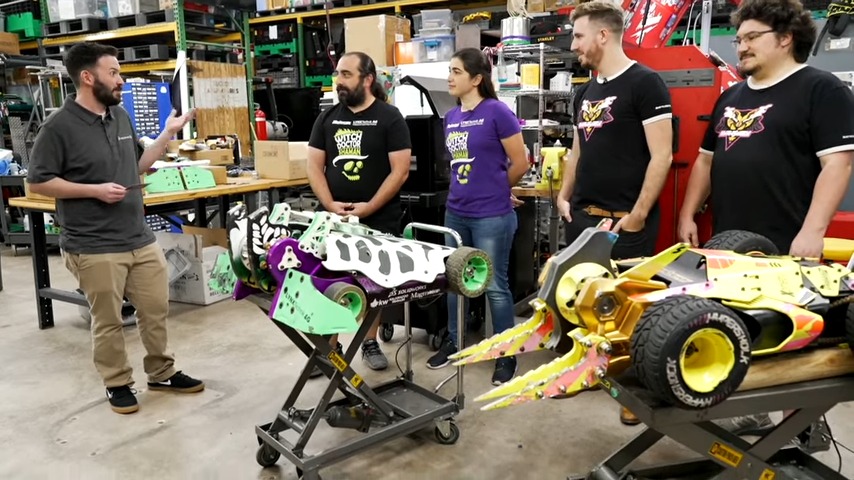 At the technical presentations we learned a bunch more about these bots. Andrea, from Team Witch Doctor, touched on how the team uses SOLIDWORKS to keep tabs on the mass properties of their robots as the bots need to remain under 250 lbs. They also use center-of-mass calculations to understand how the bots are balanced. 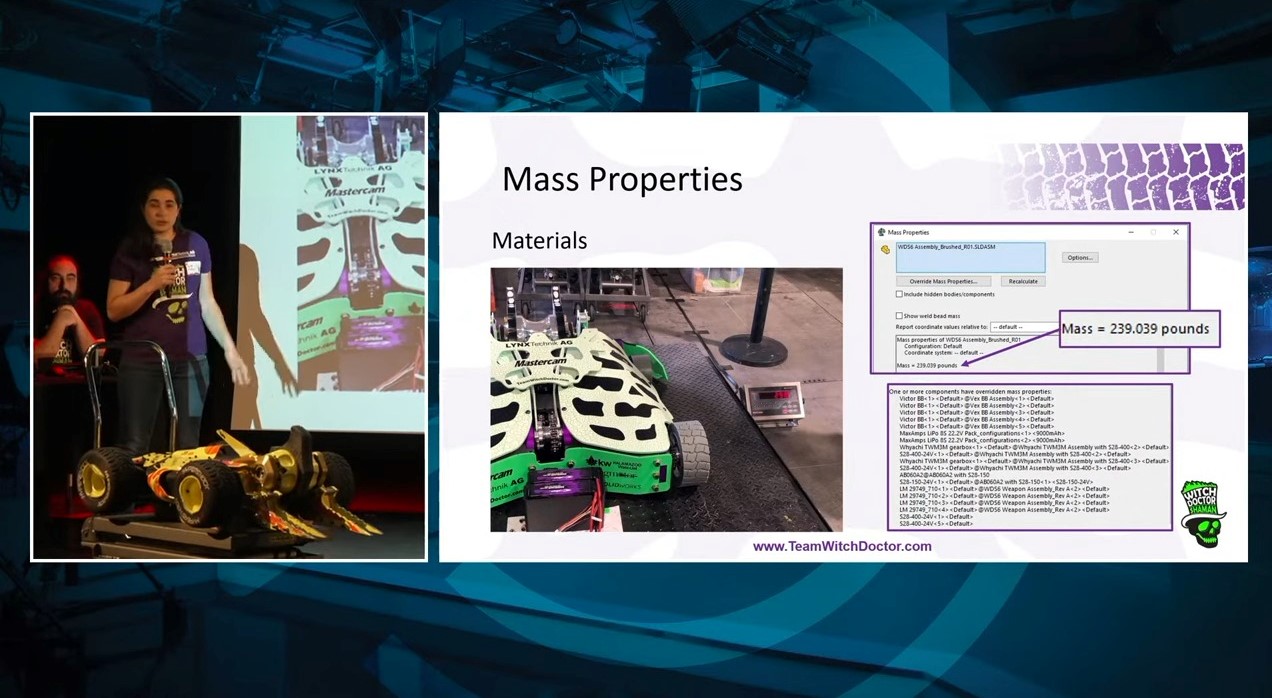 The physics are an interesting challenge, especially when you consider that the Witch Doctor bot is designed to rip into competitor bots with its weapon tip (a vertical disk) that spins at 200 mph and then launches competitor bots into the air.

This is a considerable feat, as competitor bots can be up to 250 pounds! (Witch Doctor is the green and purple bot in the above GIF.) 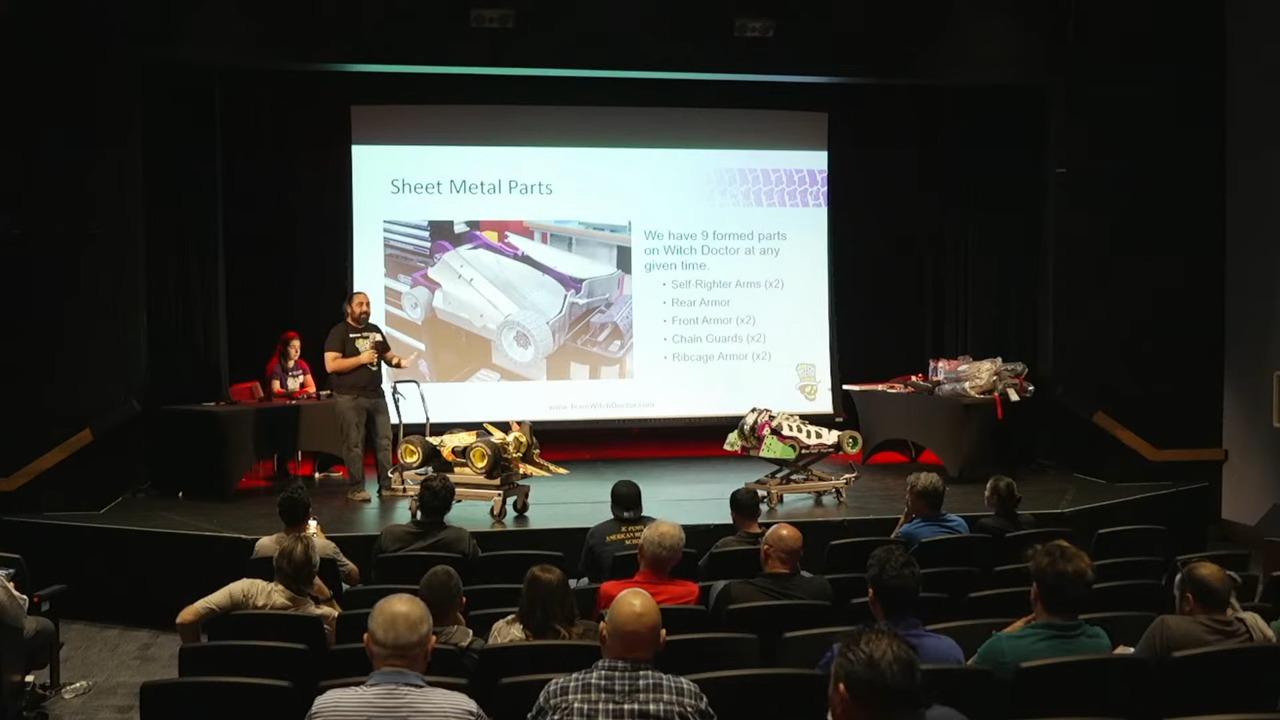 Mike, from Team Witch Doctor, shares how the robot’s parts are fabricated and the fact that the team always needs to have spare parts on hand because of the damage inflicted during bot fights. Mike also shares how the team uses topology optimization in SOLIDWORKS Simulation for internal frame components to help them maximize strength-to-weight ratios. 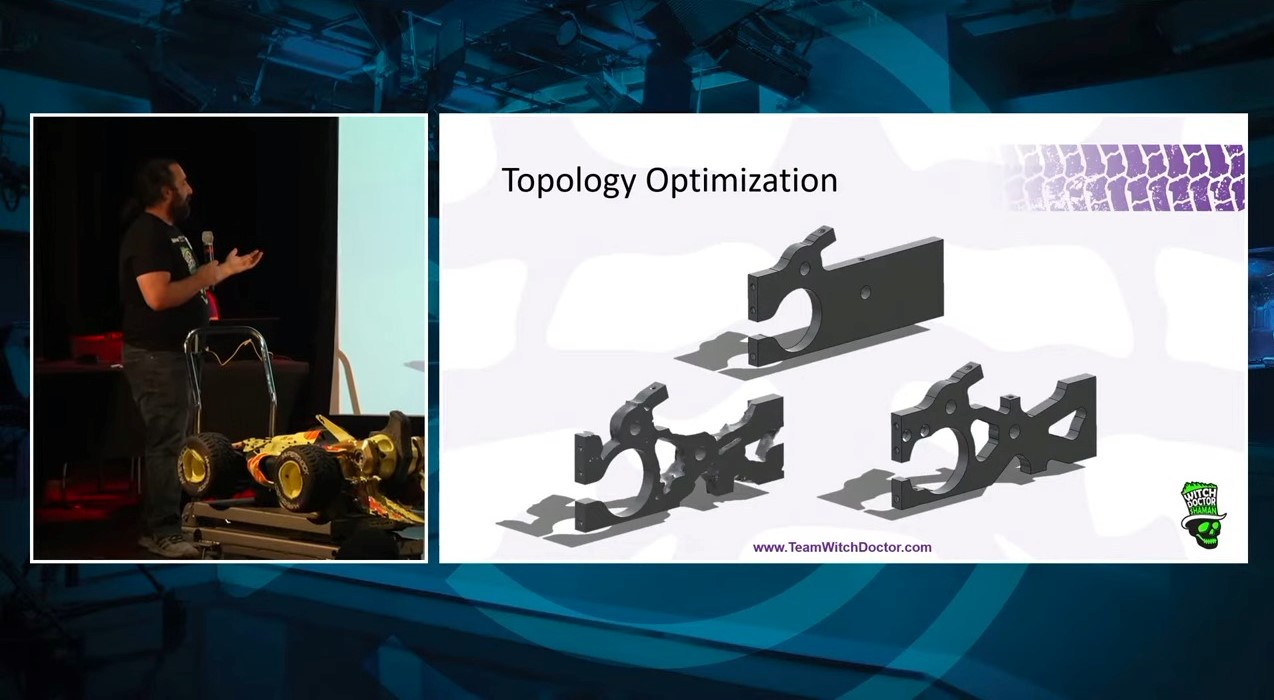 Will, from Team HyperShock, also shares a live demo of surface modeling for the top plate of HyperShock while admitting that he may be “breaking some design rules” in SOLIDWORKS, but the user group audience happily goes along for the ride. 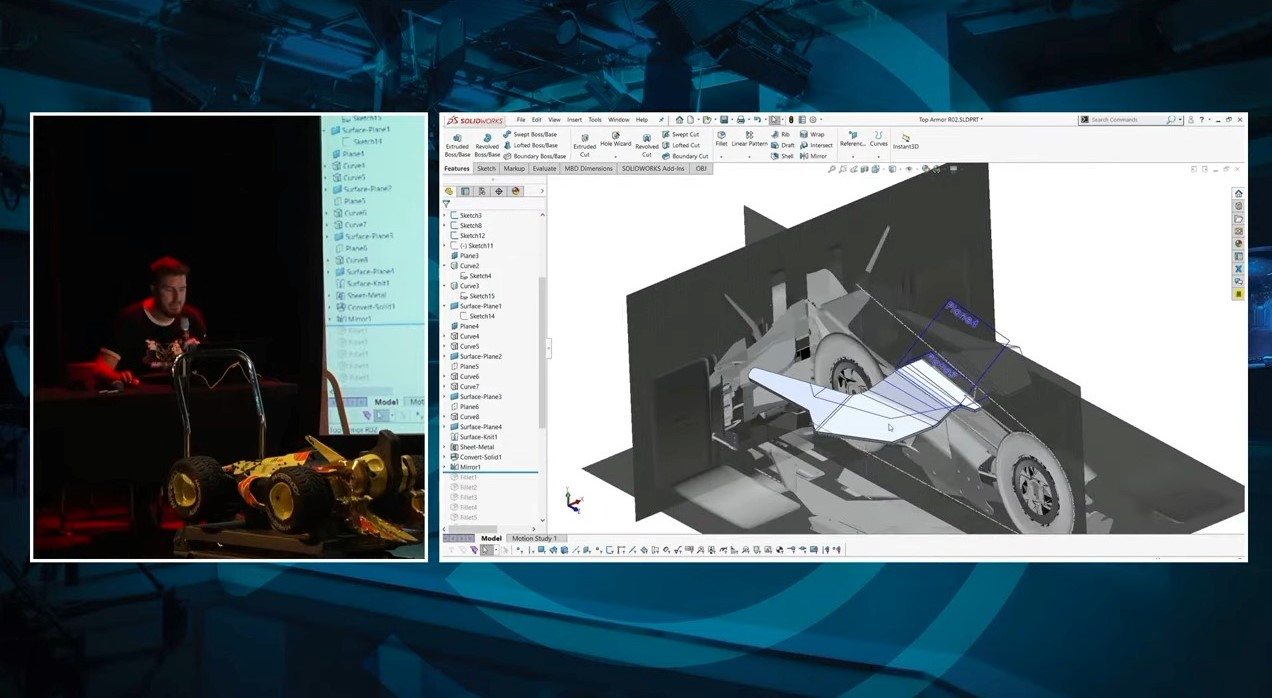 After earlier describing himself as the “master of procrastination,” Will shares about the team’s design-to-showtime timeframe, which is super tight! (And, as Will quips, “It’s how to make a robot in 10 days.”) Thanks to good friends and family and suppliers, Team HyperShock makes the deadlines to compete. 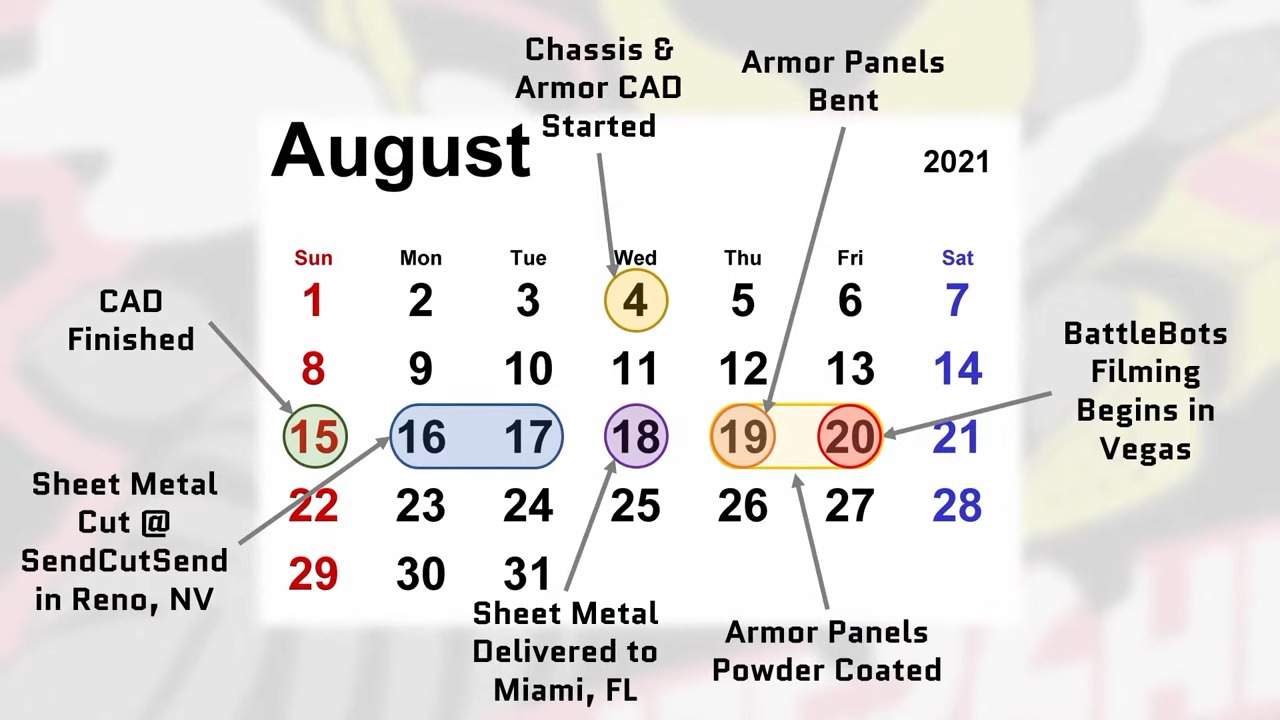 In the below GIF, HyperShock “swats” the drone from the air and then sends it flying to its eventual death in the BattleBots ring.

As always, we ended the show with an active and engaging Q&A, but with a cool twist of breaking virtual barriers, giving both audience members in attendance and those online the chance to simultaneously submit questions. The teams answered live on stage at the Koubek Center in Florida. 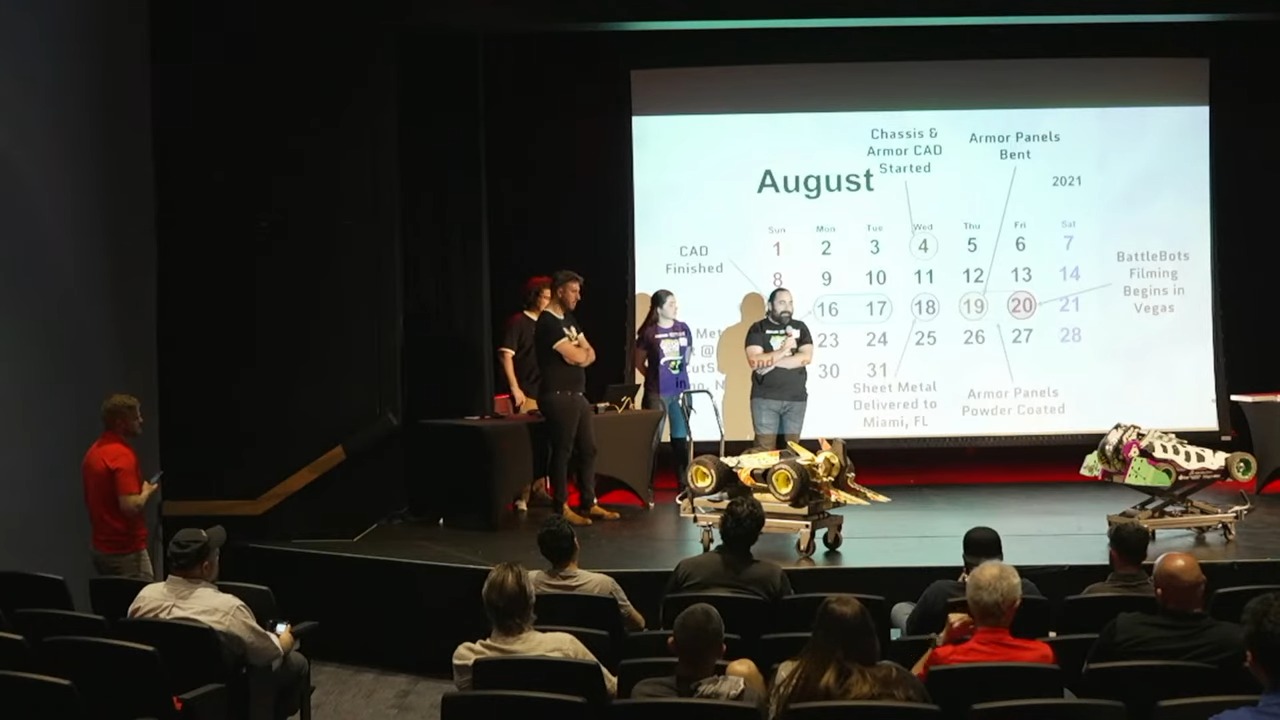